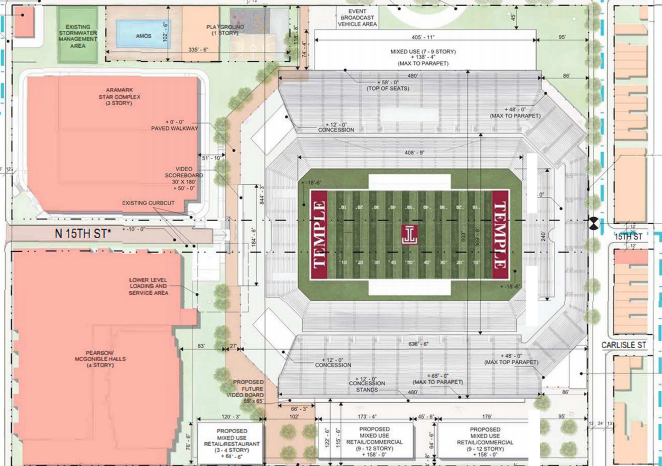 The football stadium would be built 25 feet below the level of the sidewalk on two sides to avoid overshadowing the tops of neighboring houses. Team trucks and buses would enter the stadium underground to minimize disruptions. The U-shaped design would channel the noise towards Center City.

The University is moving forward with its 35,000-seat stadium, despite protests from residents who complain that they have been left out of the conversation and that they worry about noise, traffic, parking and the behavior of the students. No resident would be displaced, Temple said, but the stadium would require the closing of 15th Street between Montgomery and Norris Streets.

The updates came through a presentation, first reported by Temple News, that the administrators intended to share at a town hall meeting that ended in protests last month.

"We want this information to reach the community," said Dozie Ibeh, associate vice president in charge of university projects. Ibeh said the goal is to have all city approvals by June, in order to begin construction, which would take 20 to 24 months to complete.

When constructed below the level of the sidewalk on two sides , the stadium would not rise above the houses on Norris or 16th Street. Service vehicles would enter underground, through 15th Street between Montgomery and Berks to avoid disturbing eclosives

A representation of the stadium proposed by Temple that would require the closure of 15th Street. The street would cross the center of the stadium.

Plans for the U-shaped building, said Ibeh, require a brick exterior to match the nearby houses. "We try to be respectful and contextual from an architectural perspective," he said.

A large restaurant, open to the public throughout the year, and two 10,000-square-foot commercial spaces would be located in front of the stadium, facing Broad Street. This would also be the main plaza through which students would enter the stadium.

The part of the stadium that faced the townhouses on 16th Street would be rebuilt and cushioned with a community garden.

The highest part of the stadium, a tower structure at the west end, would include VIP and press boxes, event spaces and classrooms.

Plans of the day of the game

Temple would use the stadium only for the six matches at home the school every year. In those days, the university aimed to maintain all pregame parties on campus by organizing university gates in various indoor and outdoor venues. The concessions would be provided by Aramark. There are no plans to allow parking in the parking lots, Ibeh said.

"The intention is to make sure that people have things to do to keep them away from the adjacent neighborhood," said Ibeh.

Students would enter the games through two doors, the furthest from the neighborhood, one on Broad Street and Polett Walk and one on Broad and Norris.

To reduce underage drinking, the university would continue to pay for members of the Liquor Control Board to monitor the area, along with university police, said Bill Bergman, vice president of public affairs of the school.

"Each game would have an agreement with the state police to flood the area with agents," Bergman said. "We would pay for that as we do now."

The school spent $ 85,000 on surveillance of the liquor control board last year, a figure that would increase, Bergman said.

It is estimated that the stadium will cost $ 130 million, but that does not include security or a special services district that would be created to keep the neighborhood safe and clean.

A study funded by Temple by Langan Engineers estimated that for an exhausted game (35,000 people) the university would need 5,000 parking spaces .

Temple has 5,294 places on campus, said Ibeh. Several lots owned by the Parking Authority and the City are also in the area, he said.

The Temple breakdown of how people would get to their football stadium on campus. The university released more details about the plan this week.

On game days, certain blocks may be closed to non-residents to discourage people from seeking free parking in neighborhoods.

One of the biggest concerns is how the closure of 15th Street could affect traffic in the neighborhood. Temple's traffic study found that 15th Street is the busiest on weekday mornings when, at most, 315 cars routinely travel between Montgomery and Norris Street, per hour. The university proposes to divert those cars to Broad Street, which handles a maximum of approximately 2,500-3,000 vehicles per hour, with a capacity for 5,000, according to the study. To do this, Norris, a one-way street would have to turn to the east or allow two-way traffic.

The City Council should approve the closure of the street. Council Speaker Darrell L. Clarke said he personally does not support the stadium and would reconsider it only if the community showed interest in it.

Temple reiterated its promise to create a special service district around the stadium, which would mean picking up trash twice per week, in addition to the cleaning of game day, improvements in lighting, sidewalks and streets.

The district would have to be up and running before construction begins at the stadium, Bergman said, to mitigate possible building headaches for neighbors.

President Richard Englert has also pointed to the Alpha Center as an example of how the community benefits from the university. Temple is building the early childhood learning center and dental clinic on 13th and Diamond streets. Temple applied for a state grant of $ 10,000 for the project through the Redevelopment Assistance Capital Program. The Center, planned through the College of Education, was in the works before the stadium proposal, said Bergman.

A representation of the proposed soccer field on the Temple campus. The University released details it hoped to share with neighbors at a town hall meeting last month.

"We are not doing that because of the stadium, but it will be a tremendous benefit to the neighborhood."

Bergman said Temple will also sign a legally binding community benefits agreement with neighbors, which could include a promise to fix the nearby city-owned Amos Recreation Center.

Partnering with neighbors to sign such an agreement could be difficult. Temple has had trouble showing what, if any, community members support the project. This week, the opposition vocal group, Stadium Stompers, organized a small demonstration against the stadium and coordinated a call for council members to express their continued opposition to the plan.

Bergman said that there are neighbors "open to conversations". He said he had met with four small groups since the failed city hall.

"We know there is a group of people who have concerns," he said. "Our point is, let's have a conversation." If people just say "heavens, I just do not want a stadium," then that's a bit difficult, but if people say, "I do not want a stadium because of traffic or sanitation issues, "I think there are many things you can do that would solve those concerns."