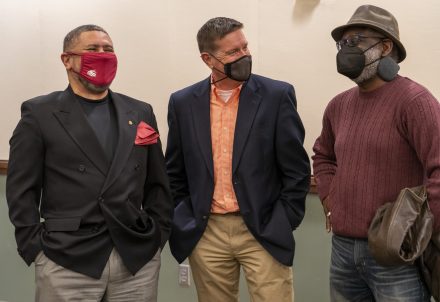 February. January 1 is a day filled with significant significance as the first day of Black History Month and the anniversary of the historic Woolworth sit-in in Greensboro in 1960. Given that, Bryant Colson '80, told the crowd gathered at Lakeside on Tuesday that I was particularly honored to be asked to return to Elon that day to share his experiences while studying at university in the late 1970s.

“I am extremely happy to be here on February 1st. The four A&T freshmen – Joseph McNeil, Franklin McCain, Ezell Blair Jr. and David Richmond – those four gentlemen are heroes,” Colson told dozens of attendees. for the annual Black History Month kick-off event at Elon University. "They started a movement that spanned 155 cities and 13 states over three months."

Despite his modesty, Colson is also part of Elon's story, serving as the first black president of the university's Student Government Association and the first black editor-in-chief of The Pendulum, Elon's student newspaper.

"I didn't even think of it as making history because that wasn't even important to us back then. We just did what we liked and did the job that we had to do,” Colson said. “But it helped me develop what I now know to be decent leadership skills.”

When he was a student at Elon, Colson said, he was lucky to have found communities that served as a base of support far from home. His roommate, Billy Doggett '81, was on the football team and that allowed Colson to get closer to the athletes on campus. As a member of the SGA, Colson felt a strong sense of connection to his fellow student senators and SGA presidents who succeeded him. And finally, with the other 214 black students at Elon during his time.

"We were a very close family because we were, as we used to say back then, all we had," Colson said of the solidarity of black students at Elon while he was a student.

He credited his deep relationships with members of those three communities for helping him become SGA president. “Those communities helped me get over the hump. Luckily I won and it was fun,” he said.

Colson fielded questions from current Elon students after his lead remarks. Zeth Dixon '23 talked about the strength of the Elon community today, but that it could always be stronger. He asked Colson how his rich relationships as a student influenced him.

Dixon, along with Anne-Sophie Hill '23 and Candace Rhodes '22, gave a musical performance to kick off the Rhodes and Black History Month kickoff event closed with a solo performance of "Masterpiece (Mona Lisa)" by Jazmine Sullivan.

Colson, who currently serves on the Orange County Board of Elections, shared the importance of Black History Month and why why February was chosen as the month of celebration. Carter G. Woodson, the second black person to earn a Ph.D. from Harvard and the "father of black history," started Black History Week in 1926.

Woodson chose February because of the birthdays of iconic people in history of blacks, such as Frederick Douglass and Abraham Lincoln. In 1976, former President Gerald Ford recognized Black History Month during the United States Bicentennial.

But recognizing the achievements of African Americans is not something that is limited to the month of February.

“Black history, to me, is something that I celebrate every day,” Colson said. “There is something on television, a person you meet, someone you talk to that makes you proud to be black.”