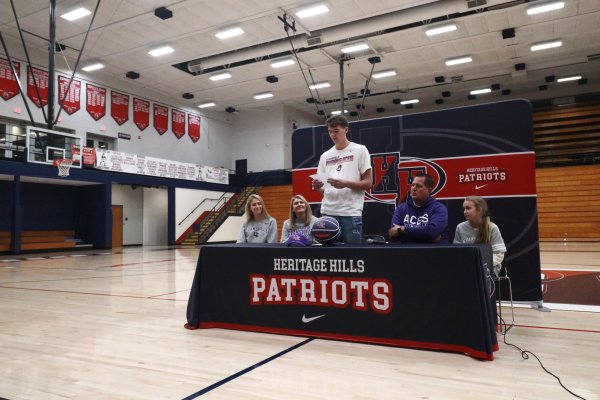 Sisley signs up to play basketball at the University of Evansville

Photo by Jimmy Lafakis / The Herald
Blake Sisley, Heritage Senior Hills (center) prepares to read a speech Friday night in Lincoln City. When Sisley signed up to play basketball at the University of Evansville, she was joined by her sister Lauren (left), her mother Heather (left), her father Matt (right) and her sister Claire (right).

LINCOLN CITY – When Blake Sisley took the microphone Friday night the Heritage Hills senior had a goal in mind. Sisley wanted to thank all the people who helped him get a basketball scholarship at the University of Evansville and took the opportunity.

That gratitude will be the cornerstone of Sisley's approach as she prepares for the next steps in her career.

"I'll always remember him here," Sisley said. "I'm looking to open a new chapter and start creating one there."

Last season, Sisley helped the Patriots capture a Pocket Athletic Conference championship and a Class 3A sectional championship. Now, take the opportunity to lead, both vocally and by example.

"I will take on that high-level position," Sisley said. “I am leading the youth and leading the whole team. I think that's something that I can bring to UE. He's becoming a natural leader from the start. "

Heritage Hills head coach Nate Hawkins has seen the great man mature before his eyes. Sisley's growth has left an indelible impact on his coach.

"I've been with that boy for all four of his four years here in high school," Hawkins said. I've known him since he was a little kid. He's very emotional. I've watched him grow up. No Just as a basketball player, but as a person. "

As Sisley's game progressed, Hawkins helped him expand his repertoire.

" He played right away, "Hawkins said. He started from day one and made an impact as a freshman on the job as a great guy. As he grows older, we've started to transition his game a little more to where he can get you off the dribble. He can shoot him. He is a fairly high level 3-point shooter. "

During the summer, Sisley played for the Indy Heat of the Nike Elite Youth Basketball League. When his former teammates signed with universities such as Butler, Purdue and Ohio State earlier this week, Sisley congratulated several of them on Twitter.

"We all love the same game," he said. "That's basketball. It's more than a game, and that just goes to show you. It's great because one day you'll be able to look and say, 'I played with that guy. I played with this guy. "It was a good experience during the summer."

On the court, Sisley takes her craft seriously. As he watches the senior develop his skills, Hawkins sees a rare breed becoming his.

"You don't find kids weighing 6'9 and 220 (pounds) in high school," he said. “Not running around here. He can shoot him and he can get you off the rebound. He's finishing better on the rim as he gets stronger. It's a pleasure to train. "

However, the work is not done. Sisley and the Pats still want to handle some unfinished business.

" We are just looking to repeat our sectional championship and our PAC championship "said Sisley." We believe that those goals can still be achieved. It will be difficult, but you must set goals that you must strive for. "