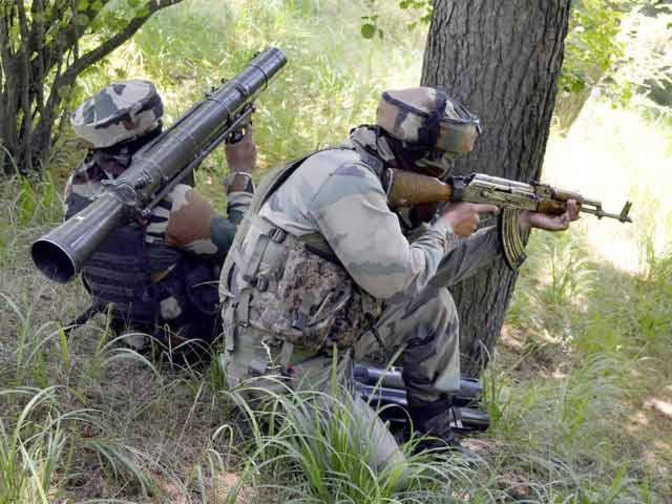 shopian: Saddam Padder, assistant professor of the University of Kashmir among five militants killed in Shopian of South Kashmir

06.05.2018
Five militants, including the commander Hizbul Mujahideen Saddam Padder and an assistant professor of the University of Kashmir, missing since last Friday they were killed at a meeting in the Shopian district of southern Kashmir.

The meeting took place in the village of Badigam Zainpora in the Shopian district of southern Kashmir, where joint teams of 44, 34, 3 Army Rashtriya Rifles, CRPF battalions and the special police operations group J & K launched an offensive.

The murdered militants were identified as Saddam Padder, who was part of Burhan Wani's core group and was active for more than four years and Tauseef Sheikh, who was also active for more than five years. The assistant professor of the department of sociology of the University of Kashmir, Dr. Muhammad Rafi Bhat, disappeared two days later
On Friday the prayers of the campus in Srinagar, accompanied the militants and it is believed that they joined the ranks and they found Padder. He was working by contract on campus. Hours before he disappeared, he had published a picture of the Urdu poem, his students had written about his appearance and also a wristwatch they gave him. The other two militants were identified as Moulvi Bilal and Adil Thokar, also known in southern Kashmir. J & K Police Chief S P Vaid confirmed the killing of five militants, but the final identity of the militants has yet to be confirmed.

The murder of Bhat, a resident of Ganderbal, is destined to create waves in Srinagar, especially in the student community, which has been protesting frequently for the murders in the last two months. The University of Kashmir, fearing the protests over Bhat's murder, decided to suspend class work in
May 7 and 8 and also postponed all examinations. The J & K police had also transported Bhat's family from Ganderbal, in northern Kashmir, to the meeting place in southern Kashmir, to persuade them to surrender, but to no avail.

For the government and the armed forces, the killing of Padder and Sheikh is a breakthrough, which police say will destabilize the militant network in southern Kashmir and also temporarily halt recruitment. The duo, which had survived for many years, despite frequent encounters, emerged as 'influential motivators and new leaders' among the militant ranks.

The meeting came a day after three militants were killed in a meeting in Srinagar and a civilian demonstrator was hit and killed by a police vehicle during the protests. The Kashmir Valley is observing a complete closure on the
On Saturday murders and mobile Internet and train services were suspended.
On Saturday three militants offered an armed salute to the militants killed in Eidgah, in the heart of the ancient city of Srinagar. This is a major concern for the government, which had managed to keep Srinagar relatively calm and disconnected from militant activities in northern and southern Kashmir.

"This is a kind of continuation of 2016. We saw many meetings in 2017 and this year it's turning out to be bloody too." The situation will remain tense throughout the year, taking into account the increase in militancy and the increase in anger among the There must be a political road forward, we can only handle the crisis temporarily, "a senior police official told ET.

In 2018, to date more than 126 people, including 31 civilians, 63 militants, three political workers and 29 police officers, the army and paramilitary personnel have been killed.