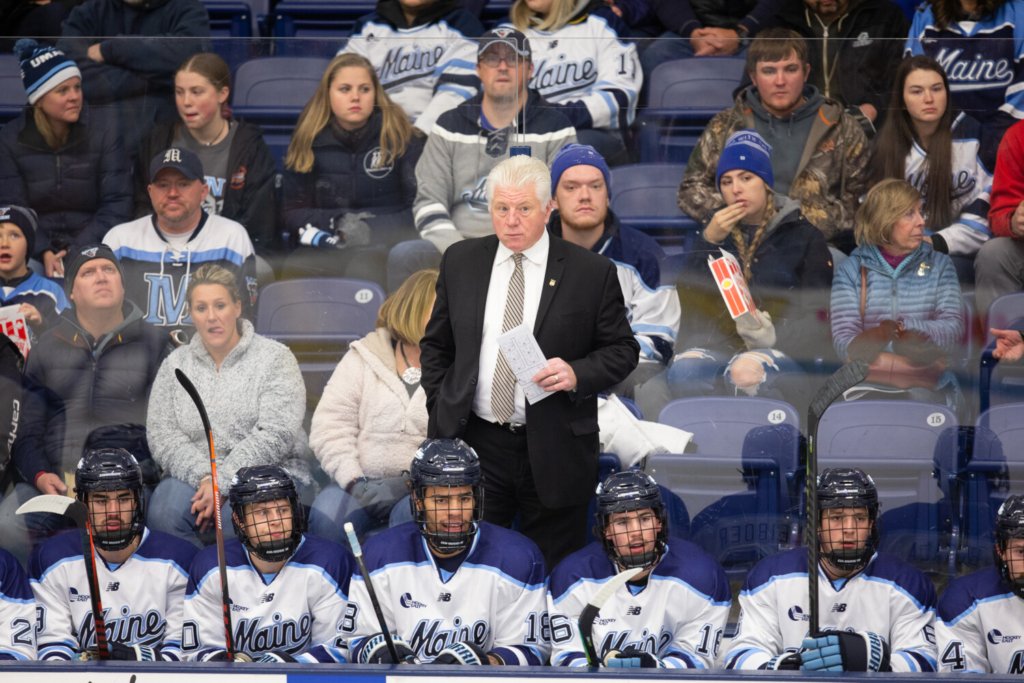 On the sidelines: Remembering the University of Maine men's hockey coach, Red Gendron

The University of Maine's men's hockey coach Maine's Red Gendron watches the action during a game last season at the Alfond Arena in Orono. Gendron died on Friday. He was 63 years old. Photo provided by UMaine athletics

There are things you don't think about until sadly they disappear. In the hours since I learned of the death of University of Maine men's hockey coach Red Gendron, who died on Friday afternoon, I have given him a lot of thought. I realize that for almost as long as I have been a fan of ice hockey, or in recent years covered the sport, Gendron was there.

Last fall, I interviewed Gendron by phone to tell a story about the uncertainties college hockey faces in preparing for a season in the midst of a pandemic. Before we started talking about his plans for the Black Bears and Hockey East season, I told Gendron that I remembered him from his days coaching the men's hockey team at Bellows Free Academy in St. Albans, Vermont. Gendron paused.

"How the hell do you remind me of BFA?"

Because in 1988, I was a sophomore at Rutland's Mt. St. Joseph Academy, and I was in the stands at the University of Vermont Gutterson Fieldhouse when Gendron's Bobwhites beat MSJ 2-1 in overtime in the Vermont Division I state championship game. MSJ was coming off consecutive Division state crowns. II and in Division I with the powers like BFA for the first time. Gendron's team was the defending state champion, but lost John LeClair, who went on to an outstanding NHL career with the Montreal Canadiens, Philadelphia Flyers and Pittsburgh Penguins, to graduate. So we thought our team, with three guys who were drafted from NHL teams and another drafted from the Quebec Youth Hockey Major League, had a good chance. Now, 32 and a half years later, Gendron vividly remembered the game.

“You had the best line in the state. But we were deeper. ”

He was right. That depth won the game over the Bobwhites.

I started college as a freshman at the University of Maine in the fall of 1990, at the same time that Gendron left the BFA to become an assistant coach on Shawn Walsh's hockey staff at UMaine. I followed the Black Bears like so many other students, but I was more satisfied with the fact that one of the coaches who led the team shared the same little Vermont experience as me.

In 1999, I took my first journalism job in Berlin, New Hampshire. Later I found out that Berlin is Gendron's hometown. With apologies to places like Waterville, Lewiston or even St. Albans, the Berlin of Gendron's youth was the ice hockey capital of northern New England. Two city high schools regularly won state and New England championships. When I arrived in Berlin, the paper mill that was the heart of the city was fading away, but hockey was still Berlin's passion, and it's easy to see how Gendron's love of the game was planted and cultivated.

Gendron's life in hockey took him from Orono to the New Jersey Devils, where he engraved his name in the Stanley Cup twice as an assistant coach, and that's the best thing that can happen to anyone in hockey. Your hard work is immortalized in silver. In the mid-2000s, Gendron returned to college hockey, first at UMass, then at Yale, where he helped coach the Elis for the national championship in 2013.

Returned to UMaine in 2013 as head coach. Gendron was always a teacher first, which is why he was best suited for the college game. Gendron focused as much on preparing his players for life as on the next game.

In early January, Gendron discussed the upcoming games in Vermont at a Zoom meeting with the media. I asked him, does playing at Gutterson Fieldhouse bring back memories of how this coaching journey began?

“Obviously, it seems like a lifetime ago, when I was a high school hockey coach in St. Albans, Vermont . Every time I enter that building, I wouldn't be a human being if I didn't think about it. Above all, the people I worked with there, the players who are now middle-aged men, some of the teachers and coaches I worked with in different sports. I coached not just hockey, but soccer and baseball back then. There are good feelings, but the best feelings I remember are the games I've been involved in at the college level where we win games there. Those are the things that are most important to me now. I have little moments of reflection there, especially if I'm in the building and it's long before the game, no one is there. Once we get closer to game time, I don't think about anything other than the task at hand that day. "

Gendron accomplished a lot in his life, but he wasn't ready to sit down and enjoy it. It was a pleasure to follow and cover Gendron's career for 33 years, and the abrupt end of Gendron's life leaves a void.

Often when he was grateful for his time, Gendron would reply with "OK , friend. "It was a simple statement full of respect. That feeling was mutual.