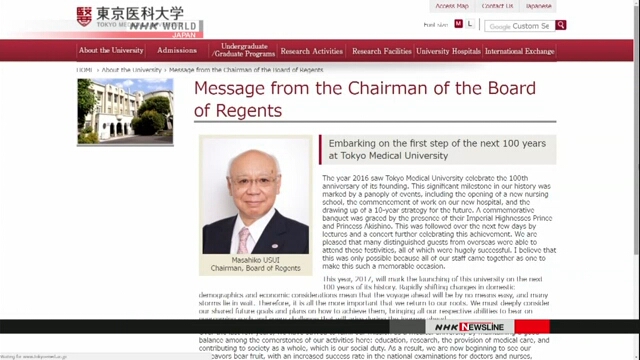 NHK learned that a top executive of a medical university might have been involved in a developing bribery scandal that led to the arrest of a bureaucrat from the Ministry of Education.

On Wednesday, Tokyo prosecutors arrested 58-year-old Futoshi Sano on suspicion of unlawfully holding his son enrolled at Tokyo Medical University in exchange for favorable treatment in May last year. Sano was head of the ministry's Office of Science and Technology Policy, but was dismissed from office after the arrest.

Sources close to the matter told NHK that Masahiko Usui, the director of the board of directors of Tokyo Medical University, asked Sano to help his school become a beneficiary of a subsidy program private universities. The university was one of the 60 chosen for the subsidy last fiscal year.

It is alleged that Usui took the lead in inflating the score of Sano's son, who took the college entrance exam in February, to ensure his acceptance.

Prosecutors are investigating to shed light on possible collusion between a high-ranking bureaucrat in charge of the education administration and the prominent university's top executive.

As a graduate of the Medical University of Tokyo, Usui became its president in 2008 after serving as the head of his adjunct hospital. He has been in his current position since 2013.

On the university's website, Usui is committed to working to help your institution acquire more research funds from outside sources.