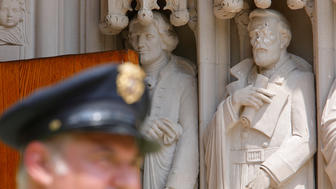 Duke University is removing the statue of Robert E. Lee from its chapel

Duke University authorized the removal of a statue of General Robert E. Lee from the front of its chapel on Saturday after that the students make it very clear that they no longer want the Confederate monument.

Duke University president Vincent Price said on the university's website that he made the decision with "strong support from the Board of Trustees" after the monument was removed Wednesday.

"I took this course of action to protect Duke Chapel, to ensure the vital safety of the students and community members who worship there, and most of all to express the deep and enduring values ​​of our university," Price said in the publication of the Saturday.

The University of Durham, North Carolina, seems destined to follow other institutions and relocate its monument. The monument will be "preserved" in some capacity, Price said, "so that students can study the Duke complex past and participate in a more inclusive future."

Last Saturday, one person was killed and several others injured during a "Unite the Right" rally around a Robert E. Lee statue in Charlottesville, Virginia. (Not that Confederate General Lee himself would have wanted the statue.)

The violent event triggered a national storm that led to the overthrow of a Confederate monument in front of a Durham courthouse on Monday.

On Saturday, Boston gears up for its own rally called the "alt-right," as police prepare for thousands of counter-protesters and possibly white supremacist typhus that were spotted in Charlottesville over the weekend.

Prior to the event, a Holocaust memorial was vandalized in Boston Monday night, the second act of vandalism against that memorial this summer.

In the two years since the white supremacist and admirer of the Confederate flag Dylann Roof massacred nine black parishioners in a South Carolina church, the movement to remove Confederate symbols from public property has gained momentum.

So far, more than 60 Confederate symbols have been removed from city and state-owned land across the US, according to the Southern Poverty Law Center. The city of New Orleans recently toppled four statues in honor of the Confederacy.