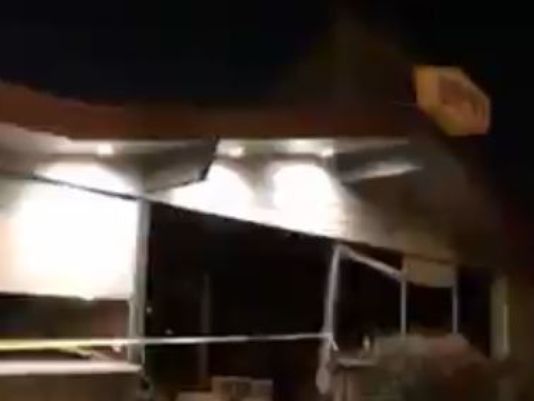 Car collides with Denny's near the University of Louisville, injures 10

A look at Denny's on Eastern Parkway, near the campus of the University of Louisville, after an SUV crashed into the building, injuring 10.
Courtesy of Maxwell Mitchell

A video provided by Maxwell Mitchell shows the damage caused to Denny's near the U of L after a car crashed on his forehead. (Photo: Screenshot)

A car hit a Denny's near the campus of the University of Louisville on Tuesday night, sending 10 people to the hospital.

At around 11:30 p.m., the Louisville Metro Police responded to a call from a Honda rider who hits the Denny's restaurant on Crittenden Drive and Eastern Parkway, according to Louisville Metropolitan Police spokeswoman Alicia Smiley.

The male driver, whose age is unknown at this time, lost control of the Honda Pilot and crashed the car in the restaurant, traveling about 10 feet inside the building.

The driver, as well as nine other employees and sponsors were taken to hospital without life-threatening injuries, said Smiley.

"Our thoughts and prayers are with the injured as a result of the unforeseen accident at our location in Louisville, Kentucky on Eastern Parkway at Crittenden Drive We wish everyone a speedy recovery At Denny's, the safety of our guests and team members is our Due to the damage in the restaurant, we have closed the location until it is appropriate to reopen and we are cooperating with the officials during their investigation. "

Thomas Novelly can be contacted at 502-582-4465 or by email to tnovelly@courier-journal.com. Support strong local journalism by subscribing today: www.courier-journal. com / tomn.