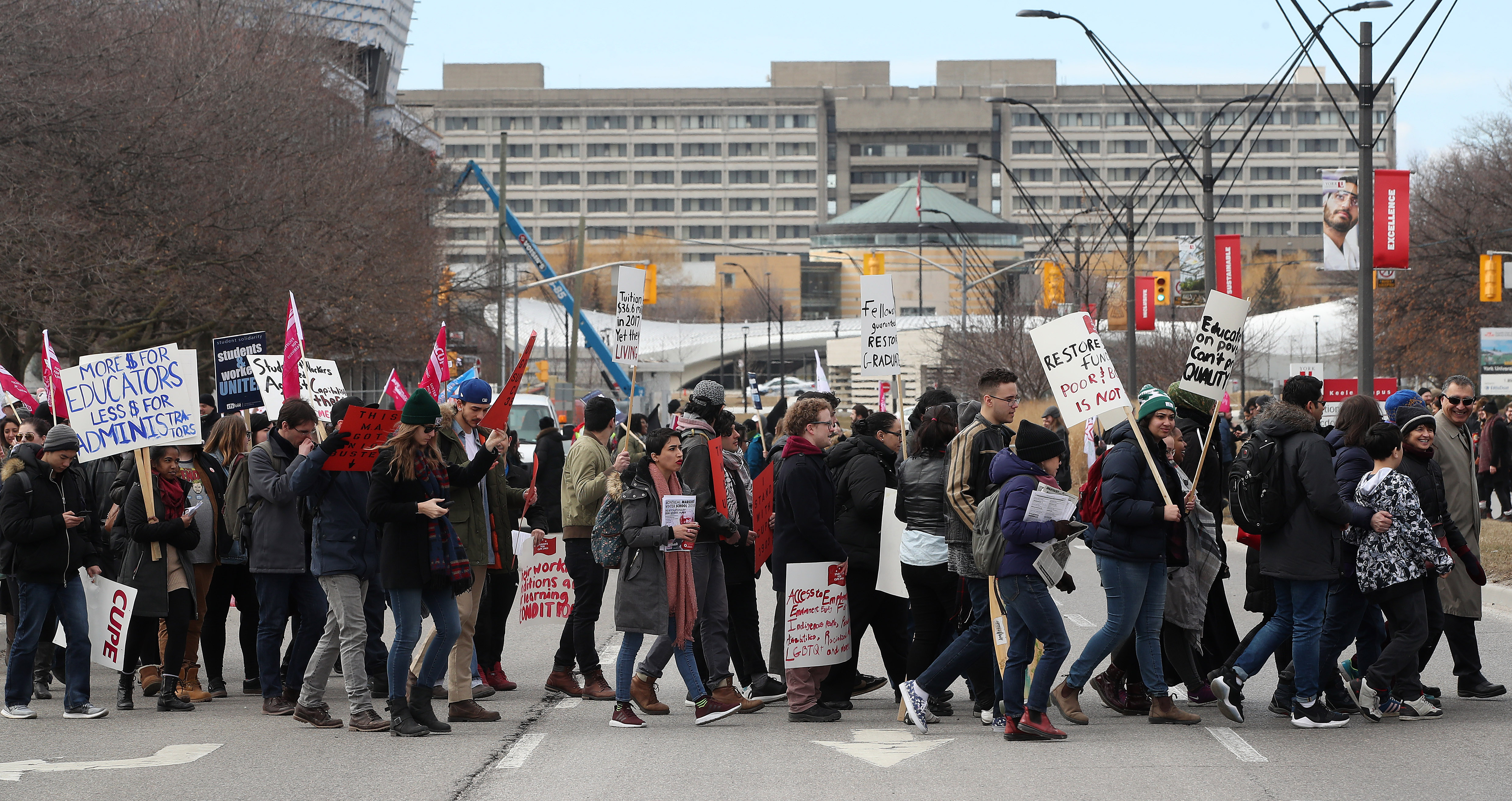 York University Strike: Was the School Right to Continue Classes?

When the University of York in Toronto is approaching week three of a strike by hired teachers and other teaching staff, there is a large confusion among students about which classes are running and which are canceled. But there is also a disagreement between the student leaders and the administration over who had the authority to even decide whether the courses should continue or not.

On March 14, York held a special meeting of the Senate to determine whether that body-which is responsible for the school's academic policy and composed of teachers, administrators, and student representatives-had the authority to decide whether the classes would continue.

Due to a technicality, the president, Lesley Beagrie, of the health faculty, decided to postpone the vote for a later date. This resolution was challenged but confirmed after a vote of 54 to 53 in favor of deferring.

"We challenged the decision that the Senate executive made to differ because we felt that it essentially discarded it and undermined the authority of the Senate "says Richard Wellen, president of the Faculty Association of the University of York (YUFA) and member of the Senate. "There was no reason to defer it other than to make the decision at the hands of the Senate."

YUFA has asserted that York's decision to continue the classes is a violation of Senate policy. "Basically, the Board of Governors has been trying to convince Senate executives that they have really radical powers that essentially nullify the powers of the Senate," says Wellen. But in the past, the decision to suspend classes has historically been from the Senate, says Wellen. "It has always been a vote of the executives of the Senate or Senate." While the Senate is responsible for academic matters, the board of governors "oversees the government, conduct, administration and control of the University and its property, income, expenses and business and affairs," according to the secretary of the university, which administers the government in the school.

The school administration does not agree with the student leaders. According to Lisa Philipps, Academic Vice-President and Provost: "We understand that some YUFA members expressed that opinion, however, this is not the case." The responsibility to cancel classes is, and should be, determined by each member of the faculty who understands the best. the theme and is based on the preservation of the academic integrity of the course, this is consistent with the policy and practice of the university and we have heard from many members of the community that it serves them well. "

] But there is no indication that classes will be suspended in the short term. "There is no motion to vote if classes will be canceled," says Wellen. "There are a lot of people who recommend it, but the Senate did not pass a motion for Senate executives to vote on that, and I think that motion could have failed if it had been filed." The problem is that many people say that the time has passed to suspend classes; should have been done initially "

Many members of the Local Union of Public Employees (CUPE) 3903 feel that the administration of York is using stalemate instead of negotiation, hoping that the provincial government will intervene and force the union back to work.

"They feel that way because York's tactics reflect those used by the College Employer Council in its dispute with OPSEU last year, "says CUPE 3903 spokesman, Julien Arend, teachers from Ontario schools participated in a five-week strike last fall before the Ontario government after the return legislation to work.

However, in a recent email to the union members, the Minister of Advanced Education and Skills Development, Mitzie Hunter, said that the Government would not get involved

"The union was told that the legislation was not in place and that the government's policy was that this should be resolved between the parties involved," says Arend. "The extension of the house last week indicates that it is unlikely that the government will intervene in the short term."

Philipps believes that arbitration is the best option at this time. "We believe that it is the responsibility of York and CUPE to do everything possible to reach an agreement without government intervention." Third-party binding arbitration is a widely accepted approach to reaching an agreement when both parties remain aloof on key issues. CUPE to agree to arbitration, "she says.

MORE ON THE UNIVERSITY OF YORK: