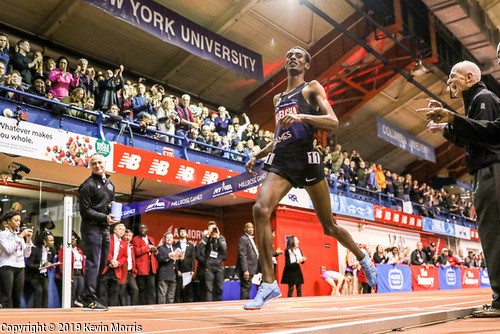 On Sunday, Yomif Kejelcha made his third world record attempt in three weeks, and this time he succeeded. He ran a 3: 47.01 at Boston University to break the world record for covered miles for more than a second.

The saga began when the Ethiopian runner of 21 years of medium distance tried and almost lost the world record for miles at the Millrose Games on Saturday, February 9. He ran 3: 48.46, a heartbreaking 0.01 seconds of the record, which was previously 3: 48.45 and held by Hicham El Guerrouj of Morocco. That day he had a great race environment, a pace and a strong field to run, but he still did not succeed in his attempt.

Following Millrose, Kejelcha ran the 1,500m in Birmingham, where he was ready to break the 1,500m world record. Unfortunately, he lost to 19-year-old Samuel Tefera who finished taking the record for himself at 3: 31.08.

RELATED: The world record for miles was lost by 0.01 seconds at Millrose Games

On Sunday, Kejelcha took the pacers race earlier, probably knowing he was able to snag the record. He was brought through 1K at 2:22 and quickly took the race from there. Kejelcha is from Ethiopia but trains with the Nike Oregon Project.