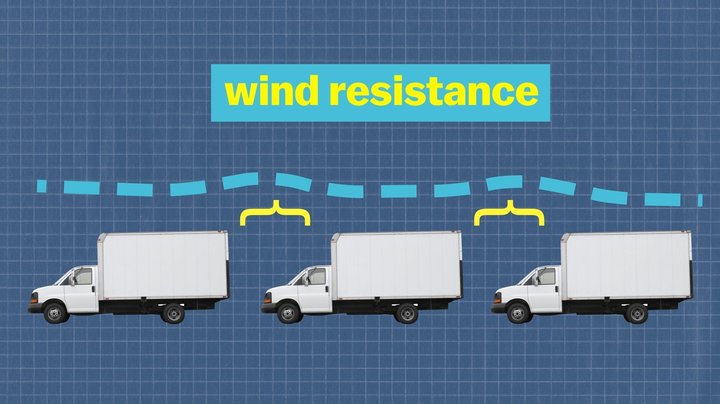 We've all been there. Missing batteries, diapers, socks, whatever, go online, order and click on the free two-day delivery option. Why? Why not? It's free and it's fast.

What people may not realize is that fast delivery has an environmental cost.

A new video released by the University of California and Vox as part of its Climate Lab series aims to draw attention to the involuntary impacts of our need for Instant gratification by highlighting the amazing scale of digital shopping revolution.

Since 2009, deliveries of the US Postal Service UU They have increased by 65 percent, according to UC Davis. As the Christmas shopping season approaches, it is estimated that online sales in November and December alone will reach $ 107.4 billion.

Electronic commerce has facilitated the lives of people. Nearly 80 percent of Americans shop online, and can do so anytime, anywhere. One in five people even does so while using the bathroom.

It can also be greener than going to physical stores, since people do not need to get on their cars to get there. A study by the Massachusetts Institute of Technology found that a traditional buyer who visited stores had carbon footprint almost twice as much as an online buyer .

However, there is an important warning. This environmental advantage of online shopping disappears if the buyer selects a fast delivery.

" These urgent deliveries are those that break those benefits because now there is no time to consolidate, so there will be more trips for less cargo," said Miguel Jaller, an assistant professor at UC Davis.

In extreme cases, articles may have to be sent from another state or from another country. But the biggest problem is that companies have less time to organize transport more efficiently, which means that trucks are shipped half full, which increases the number of trips and vehicles on the road.

As a result, carbon emissions skyrocket per customer and per product. Why does this matter? These emissions trap heat and contribute to climate change.

A multiannual study from the University of Delaware, centered in Newark, Delaware, discovered that online shopping overwhelms the transportation system in terms of speed, travel times and emissions. Delivery trucks increased air pollution and road wear, according to the report.

What are the solutions? Smart semaphores are an idea in the UC video. These are being tested in cities, including Los Angeles. The city system uses sensors, cameras and computers to adjust signals responsively to keep traffic moving smoothly. This can accelerate travel and reduce idling, which reduces emissions.

While these systems are useful, traffic may have a marginal influence on pollution in some cities, said Josué Velázquez, director of the Department of Sustainable Logistics of MIT. "There are many other factors that affect transport emissions during delivery," he said, as the slope of the route.

Then there is the "platooning". Trucks connected wirelessly communicate with each other while maintaining a constant speed on a closed line at highway speeds. Supporters say that this can reduce congestion, reduce emissions and improve air quality. A recent article by the TNO research company says the platooning could reduce fuel use by about 10 percent .

But reducing the impact of shipping is also about changing the behavior of buyers and some of the impulses of consumerism, Jaller said. " We need to control ourselves, I think there's also a lot of impulse buying and induced demand."

Fast and free shipping for all these products may seem obvious, but "we need to know that it is not free for the system and the environment, "Jaller said. "So we're not paying for that externality."

Jaller said that changing consumer behavior is the way to solve the problem, whether through incentives, taxes or simply transparency about the real cost of the products and services online.

An idea that gains ground is a "green button" on shopping websites, which allows customers to choose the green option to wait a little longer for delivery to make sure it is sent in the most efficient way in terms of energy.

Of course, delivery is only part of the impact of the goods we consume, which a study in the Journal of Industrial Ecology estimates contributes to more than 60 percent of global emissions of greenhouse gases, but it could be a good place to start.

To get more content and be a part of the "This New World" community, join our Facebook group.

The series "This New World" of HuffPost is funded by Partners for a New Economy and the Kendeda Fund. All content is editorially independent, without influence or input from the foundations. If you would like to contribute a publication for the editorial series, send an e-mail to thisnewworld@huffpost.com