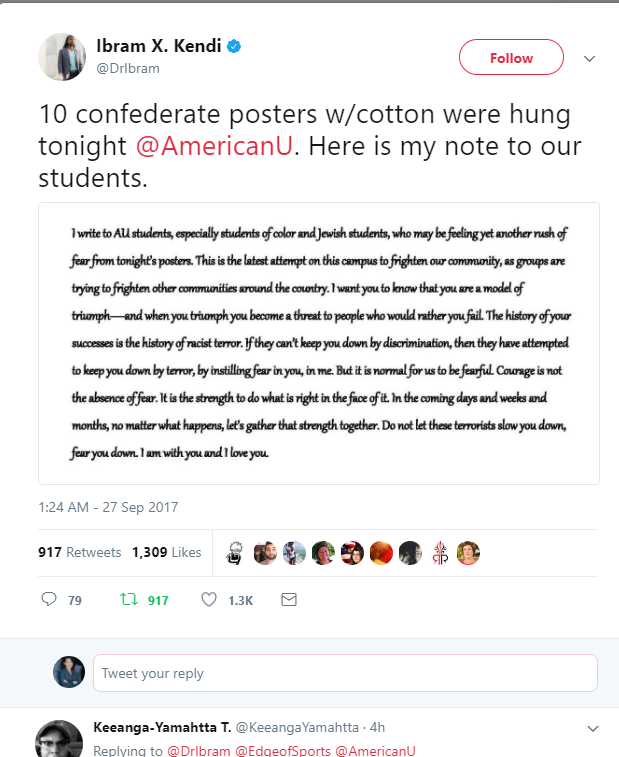 What the university is about: reflections on the incident of partiality of the American university

On the evening of September 26, shortly after the historian Ibram Kendi presented the new Center of Research and Anti-Racist Policies of the University of the United States, an as-yet-unidentified man hung signs of Confederate flags with cotton plants in four buildings.

Images of video and photos show a white man of about 40 years, approximately 5'10 "and a little disguised as a construction worker (so far, I have not heard reports of white men between 30 and 50, 5 '5" – 6'3 "detained because" they comply with the description ").

(Kendi, who won the National Book Award for Seal from the beginning: The Definitive History of Racist Ideas in America noted that he was not sure if the incident was related to the new center)

As a professor at American University, particularly as one that focuses primarily on teaching freshmen, I find myself once again considering that it is possible to have a broken heart without being surprised … For the second time in six months, our campus has been the scene of a very public demonstration of white supremacy. They left home for the first time just a month ago and are dealing with this violation as they prepare to write their first college documents and take their first exams. I'm not surprised because in America in 2017, white supremacists have become more brazen and public.

Because this is not my first rodeo (see my writings on the last major UA racial incident), I can already predict some of the setbacks that our community will receive as we seek ways to embrace and support our students, condemn this hateful act and be up to our mission as an institution of higher education. We will be told that college students are weak snowflakes that scream for safe spaces; that the real story is that intolerant liberal students shout opposite voices. Finally, we will be told, in defiance of history and logic, that the Confederate flag is not a symbol of white supremacy, and that the reaction of our community demonstrates intolerance towards a form of American heritage.

At the risk of sounding like the hyper-educated liberal elite of the ivory tower that I am, that's just shit .

And as an educator, I want to take this opportunity to have a real and honest conversation about why.

In my multidisciplinary first-year government class, I assigned my students an exchange of letters between a law professor and his students, who objected to wearing a Black Lives Matter t-shirt in class. The students had told the teacher, among other things, that wearing the shirt violated their obligation to teach law instead of politics; that Black Lives Matter is a movement that promotes violence and marginalizes whites. I usually assign the lyrics not as a discussion about Black Lives Matter, although I am transparent about my support for that movement. I do it as a way to discuss our responsibilities in the learning community. Can you expect an 18-year-old who left home a few weeks ago to face a teacher he does not agree with? Does the teacher have to pretend not to have opinions?

It is a fantastic exercise that always produces one of the best conversations of the semester. And it feels especially relevant when my colleagues and I return to the classroom in a context in which the pretense of neutrality would be a slap in the face to our students of color.

The response of the law professor to his students has an additional value at this time because he is addressing the Confederate flag. She explains that whatever students believe Black Lives Matter means, they do not have the power to make mean something that does not.

"There can be reasonable differences of opinion about what something means, something can even carry a meaning attributed to it by a particular person, for example, the flag of the Confederacy carries the meaning of white supremacy, even if a particular person he believes that it only means "tradition." A person, or even a group of people, can not take away the hateful meaning of the flag simply by declaring that it means something else. "

And here is the crux of why the predictable narratives about liberal snowflakes and safe spaces are shit unmitigated:

First, you can not make the Confederate flag something it is not. It has existed to preserve slavery. The addition of cotton plants hammers the point home.

Second, you can not get a college education to mean something you do not have, or have students, particularly students of color, experience college differently than they do. Those who believe that today's students are weak and spoiled have no idea what these students go through.

Most adults and non-students have "safe spaces" in the form of our homes. In fact, thanks to the laws of civil rights and commercial practices, the majority of our workplaces are free of the type of acts and discourses to which university students are exposed every day.

College students, on the other hand, have to live indoors, often with a roommate they are not sure they can trust. My students from the School of Public Affairs, of necessity, participate in important political conversations on issues such as criminal justice, access to voting and the current administration's approach to civil rights. And they are qualified, often including class participation, which means staying together even when their communities or humanity itself is under the microscope. When they are the only person in the room who looks like them (most whites are in a white bubble of our own creation).

For the second consecutive semester, students of color at the American University face baldness attacks against their humanity. Last year, were the notes with the letters of a black brotherhood: a reference to domestic terror that we call lynching. This year, it's slavery. It is a statement that a black person is a commodity; that your spouse could be sold, that your child could be sold. That she is not part of our political body; that he is a body but not a person.

And then they have to take exams, by the way.

This is the reality. Whatever you want to say, the fact is that our students of color are being forced to show a resilience that few of us could show.

Just as you can not turn the experiences of these students into something they are not, you can not turn the university into something it is not. The university is not specifically designed as a place to learn to be resilient in the face of a lack of civility. Parents do not skimp and save and dream so that their children have the opportunity to leave home and carry the burden of other people's hate because it will be in the real world. If the university was about learning to suckle, ranunculus, then more programs would focus on getting white men out of their comfort zone. College no is supposed to try to face nostalgia for the slavery of your ancestors a month after you left your parents' house, and a week before your partial exams. This is not The Hunger Games .

The university tries to learn to get involved with ideas, not to get involved with threats to their humanity. College students want to learn to write (I tell myself), become professionals, operate more independently in the world, learn everything from physics to metaphysics. Nobody dreams of becoming a punching bag. When you see a diploma hanging on the wall, you do not think that "this person spent four years forcing a thick skin on racism." You hope they have learned math, critical thinking, love of poetry, how to fall in love, break up, find free food, find a passion, learn a skill, fall in love again, experience wonder, get to know yourself.

As a teacher, I can not pretend that the university is something that it is not, nor deny the experience of my students: particularly my students of color. I can not pretend that 2017 is something that neither is. Someone came to the campus of the American University to send a specific message to specific students: there are people who want you to feel like nothing more than a basic product. Less than safe Less than human Living through something like that is not what the university is about. And it should not be what the United States is about either. As teachers, parents and Americans, we must be honest about it.

This is Kendi's powerful message for our students:

I write to AU students, especially students of color and Jewish students, who may feel another wave of fear for tonight's posters. This is the last attempt on this campus to scare other communities across the country. I want you to know that you are a model of triumph, and when you succeed you become a threat to people who would prefer you to fail. The story of his successes is a story of racist terror. If they can not keep you down by discrimination, then they have tried to keep you in check by terror, instilling fear in you, in me. But it is normal that we are afraid. Courage is not the absence of fear. It is the strength to do the right thing in sight. In the coming days, weeks and months, whatever happens, let's gather that strength. Do not let these terrorists hold you back, fear you. I'm with you and I love you.