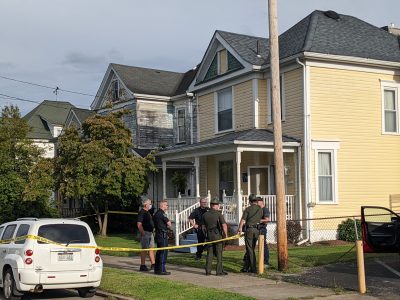 File Photo
The Ohio Valley has recently been rocked by a series of violent crimes, including murders in Moundsville (pictured), Mozart and Belmont. A West Liberty University criminology professor believes that stress may be a major contributing factor.

WHEELING – A tumultuous second half of September marks what could be considered a sharp rise in violence in the Ohio Valley, and a West Liberty University professor is looking at it in context.

The final weeks of that month saw a litany of bloody days, beginning with a murder on Mozart on September 16. The following week began with the shooting of a man on 29th Street in Wheeling. The next day, while that man was hospitalized, Belmont County deputies announced a double homicide in Belmont, Ohio. Then, at the end of the same week, a Moundsville man murdered his housemate with a machete, before taking his own life.

Keith Bell, coordinator of the criminal justice and criminology program at WLU, who has a doctorate in criminology from Indiana University of Pennsylvania, believes that various violent crimes can be a symptom of domestic tension, the combination of several factors throughout of the course. of the COVID-19 pandemic. These problems range from spending more time with the family, which can cause stress and conflict if living conditions are difficult, to increased drug and alcohol use, possibly related to unemployment.

"If we are going to put a theory to it, it would be the stress theory," Bell said Wednesday. “Everyone is under a greater amount of stress right now. … Unemployment, lack of income, that's enormous, that puts stress on all family members, whether it's children, marriage, whatever. "

"… It could have been a lot of things, but that would be stress theory. Especially if someone is not used to that kind of pressure in their life".

Anorah Schostag's death in Mozart saw William Ross Carman charged with first-degree murder after Schostag was found with "a large, deep wound to the neck and a large wound to the chest" at her Frazier Run Road residence. Daniel Isaac Wines was charged with attempted murder after he allegedly told police that he shot a man in the back "in self-defense" on September 20

Belmont's couple, Thomas and Angela Strussion, died Sept. 21 in what was declared a double homicide by Belmont County Sheriff David Lucas. As of Friday, no arrests have been made in connection with their deaths, although Anthony Michael Dibacco and Maylyn Smith were arrested on extortion charges, accused of blackmailing Thomas Strussion

On Sept. 25, police say Nicholas White attacked 71-year-old Thomas McKeever with a machete while McKeever was in the shower, before shooting himself. Both men died as a result.

Too close for comfort?

Bell said that because the smaller cities in the Ohio Valley make more people get to know each other, in addition to the more time they spend around other people, he speculates that many of these violent episodes can ultimately be related to problems at home. .

"This is not just any guy who jumps off the road and kills someone he doesn't know," he said. “There is a relationship there; In Wheeling, in small towns like this, that's statistically what we see. … In general, a large percentage of the murders that occur here, the victim and the offender will meet ”

Bell said the COVID-19 pandemic has given his family much more time to spend together, even as his wife, a nurse, spends more hours at work for more days in a week. While Bell said his family dynamics are healthy and his family appreciates the time they spend together, other families may not have the same dynamics, creating problems as the weeks go by.

“If I were putting all of this together, I would say that increased unemployment stress due to COVID will lead to increased alcoholism and abuse of drugs, and that will lead to an increase in domestic situations.… Is there a possibility that there is an increased risk of domestic assaults? Absolutely yes. Will they go as far as murder? I would say no. "

an anomaly, not a trend

Bell said that crime, in general, has seen a notable decline in recent years, although violent crime has remained somewhat stable. The benchmark rate for crimes like murder in the Ohio Valley, he said, is very low, so any increase above the norm represents a large percentage increase.

“If you look at the crimes that are happening right now, compared to the problems we've had in the past, the past crimes were more things like drugs. If you go back and statistically analyze our crime,… at Wheeling, 2018, 2019, we've had a steady decline in crime. The only crimes that are increasing are assaults and there are drug-related crimes, but many of our crimes have decreased. ”

Bell also commented that, in his opinion, the Wheeling Police Department has been very proactive in preventing crime, which, according to him, was at odds with a trend toward higher crime overall.

“I think this emphasis on crime prevention deters much of this crime and that is why our communities are relatively safe. In addition, I believe that we have many resources available to people who suffer in violent relationships, and these resources support this very mission, ”he said. “Many communities across the country have not been as proactive as the Ohio Valley in deterring crimes against property and persons. That is why this appears as a statistical anomaly at the time and not as a trend, in my opinion. ”

Bell's fears about the future, he said, are the long-term effects of the COVID pandemic on children, who may not be socialized in the same way that their peers had.

“Think of the child who had to stay home for two semesters of elementary school, but doesn't get proper nutrition, doesn't get proper medical care, hasn't seen a doctor in 16 months, has been abused. What happens to them if they are in that environment? "he said.

“ We're talking about the murders that are happening lately, but what really scares me is, how will this affect fourth, fifth, sixth graders 10 years from now? problems are they going to face? … That is what scares me most about the things of the confinement are not necessarily the crimes and the things that are happening now. It scares me what is going to happen in ten years and the effect on the children. "