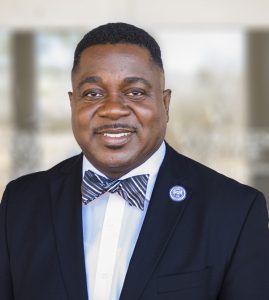 WEST LIBERTY – A two-vote margin Wednesday among the 12 representatives of the West University Board of Governors Liberty will keep President W. Franklin Evans in command of the university.

The board then unanimously voted to subject Evans to disciplinary action for plagiarism in various speeches he has made as president of the university, although the specific actions were not disclosed.

When the motion to fire Evans was put to a vote, only five board members voted to fire the president, and seven voted to keep him.

The vote to keep Evans came after nearly two hours in a closed-door session to determine the fate of the president, who apologized for several instances of plagiarism while delivering speeches. Evans was not present at the closed session, but appeared briefly at the beginning of the meeting to greet the convening board.

Among the representatives of teachers and students on the council, the vote was divided. Jones, the student representative, voted against firing Evans, while Metz, representing the faculty, voted to fire him. Metz declined to comment further after the vote.

Ryan said the faculty senate will meet next Tuesday. Barber and Wheeler could not be reached for comment, while Underwood declined to comment.

With the disciplinary action against Evans, he will respond directly to the board, excluding the human resources department from this action.

"Detailed items will be developed with the help of the Higher Education Policy Commission, (its) human resources department, and the board of governors will comply with all disciplinary actions," said Lucas, who serves as chairman of the board. “… I will ask the HEPC for their help in taking disciplinary measures together. … Details are not available. ”

Lucas said he wants the votes against Evans to serve as an end point for the tumultuous last weeks.

"We want to end the event, but with the proper ending, and make sure everyone, from the board of governors to the incoming freshman class, understands how seriously we took these allegations and how much thorough investigation was done," he said. .

Last week, the Board of Governors had referred the matter to the university's Human Resources department, tasking them with providing the requested information to the board for review, at which point a decision would be made on Evans' future.

That move came after meeting for more than 90 minutes behind closed doors, a meeting in which Evans did not participate.

Students and teachers had leveled allegations against Evans earlier this month when it came to light that he had removed citations, without attribution, from a variety of sources for his fall convocation speech on Sept. 15, a speech he delivered. on June 16, and a speech he gave on Martin Luther King Jr. Evans Day later apologized in a letter to the university.

“I'm the first to say for the convocation speech that I did share some information and I didn't give it credit,” Evans had said.

"It was careless and negligent and I apologize for that," he said. “All I can say is that I never intended to give the impression that those were exactly my words. I forgot to identify where it came from and I'm sorry. I'll make sure it doesn't happen again. ”

At the previous Board meeting, board member Jason Metz presented a survey conducted by 66% of the faculty. According to the survey results, 86% of teachers considered Evans' leadership to be "compromised," 73% would have given Evans a no-confidence vote, and 60% of those who voted would also ask for his resignation. . Forty-five percent of those surveyed believed that the problems could be solved through punitive actions.

“They are asking our leaders how we intend to enforce academic honesty in our students, and our leaders don't have an answer for that, unfortunately. Some professors have reported that they have difficulty enforcing our student code of conduct related to plagiarism, because they are citing double standards on campus. ”

Lucas said he wants to impress the weight of the plagiarism accusations.

"I think that the actions of the university, the Faculty Senate and the Board of Governors, there can be not a shred of doubt about how seriously that is taken at West Liberty University," he said. “We've been at this (for) a month, and I've personally learned so much about plagiarism that I never thought, in my life, that I would need to learn.

“I don't know if anyone could look and see some level of importance that we did not give to all the research, all the information, our board is willing to collect, receive adequate notices to the public, get the information from the students. … (It has been) exhaustive and with every intention of all efforts to resolve the problem here. ”

Moving forward, Lucas said that Evans had spoken to the board, and Lucas feels that the president is repentant and ready to move forward in his career.

"Dr. Evans spoke and realized the time, the effort and he is ready, "Lucas said." He is a very energetic man and… he realizes that there is still work to be done. He is fully committed to unifying and moving the campus forward. "