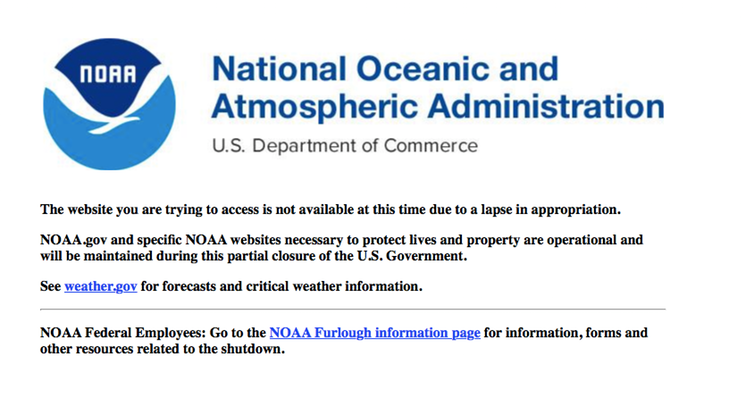 I am very lucky. My work involves researching topics of interest and importance (OK, maybe I'm skewed) related to climate and oceanography of the North Pacific and the Pacific Northwest climate.

My main office is in the Pacific Marine Environmental Laboratory of the National Oceanographic and Atmospheric Administration, in Seattle, Washington, in a charming setting on the shore of Lake Washington. My co-workers are an interesting group of people who perform a variety of jobs ranging from the chemical oceanography of deep-sea volcanoes to the causes and effects of the sea ice decrease in the Arctic. This research involves the design and manufacture of innovative instruments, with most of this activity carried out in on-site laboratories and test beds.

It is usually a busy place. But these days, it has been terribly quiet

The reason, of course, is the partial closure of the federal government, which has resulted in the layoff of "non-essential" employees of NOAA, a branch of the Department of Commerce .

Actually I am an employee of the University of Washington, so, in principle, I should not be affected by the closure. But that is far from the case, and my situation is by no means isolated.

The Joint Institute for the Study of the Atmosphere and the Ocean (JISAO) at the University of Washington has approximately 115 employees, and 89 of them have a federal facility as their primary workplace. The JISAO contingent in NOAA's lab actually outnumbers federal employees. And JISAO is just one of the 16 cooperative institutes in universities in the United States through which NOAA academics and scientists collaborate.

As a principal investigator whose salary comes from the university, I have been more hampered than paralyzed by the closure. There is a seemingly infinite amount of work that can be done: documents to read, current projects that require attention, proposals to prepare. Much of this type of work can be done outside the office. And I must admit that I enjoyed the first days; if nothing else, the phone barely rings at the temporary office I'm using.

But now I'm getting very angry. I was counting on being able to advance in a study of cold air outbreaks in the Pacific Northwest, and I really need to use a web application maintained by the NOAA Air Resources Laboratory. Some other research in my pipeline requires data sets of climate models hosted by NOAA, but again, there are no data.

One could assume that a slowdown in the research being done in my field is not a big deal. But there are ramifications.

Take the weather forecast. Both daily forecasts and seasonal projections are based on complex computer models. These models need care and feeding; There is a continuous development and improvement carried out by a group of federal and non-federal types (academics and contractors). All this is basically on hold. Undoubtedly, the staff of the National Meteorological Service is still producing forecasts that work for free, but it is a setback. And this kind of pause is happening across the country, in a variety of disciplines, in research centers that collaborate with federal agencies, when the government is not closed.

Unrealized work will have some lasting effects. For example, a research cruise in the Atlantic Ocean scheduled to begin in about a month would include instrumentation to measure various chemical properties, including pH. Now it seems that the team can not be prepared and sent on time. This will constitute a serious breach in the registry.

It is emphasized that the JISAO staff performs a variety of roles in NOAA, and also varies the extent to which these individuals can roll with the blows associated with closure.

The support scientists employed by the university find themselves in a particularly difficult place. These are the people who carry out the essential tasks of preparing and calibrating the equipment, going to sea on research cruises, a duty generally less glamorous than the term suggests, analyzing samples in the laboratory and processing and publishing the valuable data to whom we go. So many problems to collect. There is not much glory here, but these people are committed to what they are doing and take pride in their work.

As the closure has been prolonged, and PMEL and Other federal facilities remain closed, options for these people have become increasingly limited. Those whose work directly involves equipment and instrumentation are especially in a bind. Many have been able to be productive by updating manuals or online training, but they are running out of things to do. Managers and data processors often use specialized software on their desktop computers; This type of work can not be done on the local Starbucks laptop.

JISAO and federal employees work together, and the distinctions tend to be blurry. In many cases, these people have similar duties and tenures, and it is not much more than a matter of opportunity if one is a federal or non-federal employee.

But now that distinction is important, because different rules apply for federal and non-federal employees. Federal employees who are on work permit will receive a late payment. This does not apply to JISAO employees, and for that matter, all their counterparts throughout the country associated with the different agencies that are directly affected by the impasse.

If the employees of JISAO can not do significant work for the benefit of the grant projects they are working on, they must find a project in which they can contribute (which is hard to say the least), take time off, or worst of all, in most cases, leave without pay.

Some people have already been forced to use license or go without pay, with poor prospects of reimbursement, and I am afraid that their ranges will increase. JISAO is doing what it can on behalf of its employees, just like the other NOAA cooperative institutes, especially to minimize the "nuclear option" of forced leave without pay. Given the requirements that accompany college employees who work with federal grants, that is not easy.

This is a fervent plea for an agreement to be reached in some way so that we can return to our regular work. I'm looking forward to the bit, and I hope it speaks for a lot of people