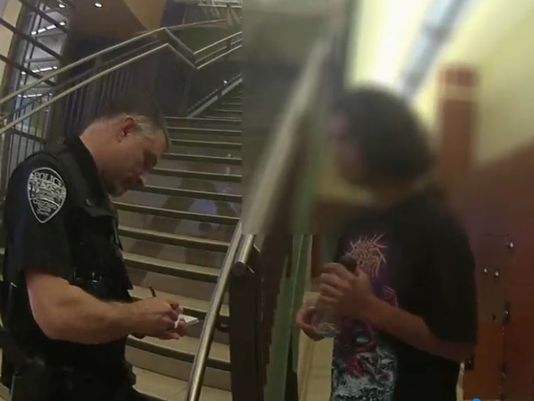 Watch as the police contact two Native American children touring the CSU campus. A father on the tour called the police when the brothers joined the late tour.
Courtesy of CSU campus police, The Coloradoan

Still image of a body camera of a CSU police officer during a contact with two Native American students during a tour of the campus on Monday. (Photo: Courtesy of Colorado State University)

Video of the body and audio camera of an emergency call to the Colorado State University police published on Friday detailing Monday's ordeal that the earth ed the Fort Collins institution at the center of a debate on racial profiling.

The mother of the two prospective students Native Americans arrested by campus police claims their children were victims in an incident that has led the university to change the way it administers the campus tours.

Police were called to the Lory Student Center after a parent attended a campus tour to express concern for the two students who had joined the tour in progress.

Thomas Kanewakeron Gray, 19, and Lloyd Skanahwati Gray, 17, had driven CSU from New Mexico. His trip to the university "of his dreams" was interrupted when the police removed them from the tour because of the concerns of the unidentified person about his appearance and behavior.

Listen to the audio of the woman's call here (a transcript of the call is available at this link):

The caller, to the who joined her son and her husband on the tour, told a police dispatcher that the two young men were acting strangely. They did not want to share their names, and the woman said she thought they were not being honest when she asked what they wanted to study.

She told the police that her clothes had dark symbols and that other adults in the group were also concerned, according to the police incident report that is published at the end of this story .

The caller said that the students joined the group on the tour with a 45-minute delay. He said the group leader asked both of them their names, according to the report, but the two did not provide them.

"One of them had his left hand on his oversized sweatshirt all the time," the woman said. "I'm probably completely paranoid about everything that happened."

The woman provided the police with the physical attributes of the students during the call, and when asked if they were white men, said: "I think they" re hispanic One said it's from Mexico. "

Police asked to see their IDs, only one of the teenagers had it on hand, and showed it to an officer, the couple offered to show a confirmation email from CSU, and the police waited while one of the teens produced the email.

When Officer Lance Hoisington asked why they refused to give their names, the Grays said they were shy. He explained that if the two had given their names when asked and explained why they were late, no one would have found them suspicious.

"Sorry to take you away from the group," said one officer. "Have a good rest from your day."

The interaction lasted less than five minutes. The adolescents were not cited for any type of rape or other detainees.

The shipment then sent to Hoisington a message from the mother of the teenagers expressing concern that their children would receive a racial profile, according to the report.

"I explained to him that law enforcement is obliged to follow up on any calls we receive and that the complaining party suspected only of the actions of the boys," Hoisington wrote in the report.

The meeting reminded him of Lorraine Kahneratokwas Gray, the mother of children, of several national instances where police shot and killed unarmed African-American men, wrote in a Facebook post.

More: Socialists react with indignation to parents who call the police about Native American students who visit CSU

The ordeal Monday is followed by a str Conservative activist Charlie Kirk of Turning Point USA.

University officials in a letter to students called a motive of partial motivated on campus that includes the distribution of Nazi propaganda and violent protest. Monday's incident was "frustrating from almost every angle, particularly the experience of two students who were here to see if it was a good option for them as an institution."

College spokesman Mike Hooker wrote in an e-mail to Colorado that CSU plans to improve the way he manages campus tours. Procedures will continue to evolve, but initial plans include:

"These are initial changes we will make as we continue to study a variety of ways we can improve the way we receive visitors to our campus and as we learn from this experience," Hooker wrote.