SINGAPORE – The National University of Singapore (NUS), known for its innovative approach to education, has managed to keep classes open at the campus during the COVID-19 pandemic by finding smart ways to keep the deadly virus at bay.

Since the pandemic began more than a year ago, the school has suspended classes only during April to June of last year, when the government implemented a partial lockdown.

One person who has played a key role in the university's anti-virus efforts is NUS President Tan Eng Chye. To keep students and faculty safe, Tan has devised a number of measures, including zoning restrictions that assign students to different areas on campus and testing dormitory sewage for traces of the virus.

But even with these security measures in place, the recent decision by the university to cancel its long-planned in-person commencement highlights the difficulties faced by educational institutions during the pandemic.

"The current situation is very fluid and the prospects are uncertain," Tan wrote in a note to staff and students on May 20. "As such, I have shared with the Class of 2020 and the Class of 2021 that the University is no longer able to hold graduation ceremonies in person for the two cohorts, which were scheduled for June 17 at the end of July 2021." The measure followed the decision of the The government announced the day before that all elementary, high school and college students would move to full learning at home due to an increase in COVID-19 cases.

"The decision to move on to online ceremonies was not made lightly," wrote Tan, who was eager to hold a graduation ceremony in person. NUS was unable to do so last year due to the pandemic.

The university had planned a series of openings. The idea was to divide some 69,000 people, a total of 23,000 graduate students from the class of 2020 and the class of 2021 plus their parents, into groups of 750 people and award degrees three times a day for a month or so.

Graduation is not only the last big milestone for college students and their parents, but also an important symbol for NUS, emphasizing the importance of face-to-face interaction in education. 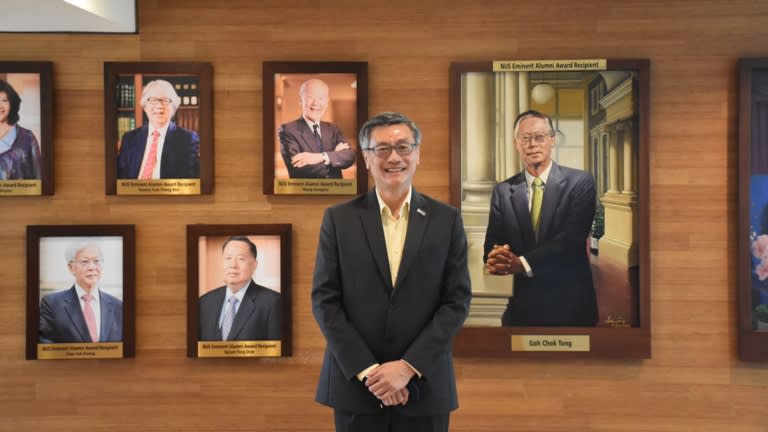 Tan has been dealing with the new coronavirus since late January last year. A colleague told him at the time that something serious was happening in China, leading him to interrupt his trip to the World Economic Forum in Davos, Switzerland.

On his way back to Singapore, he decided to bring home around 50 NUS students studying in China. Finally, he told all NUS students abroad to go home, as the COVID-19 pandemic continued to ravage the world.

Tan worked to maintain face-to-face classes despite the pandemic, collecting and analyzing information daily through a WhatsApp Group in which the deans of all faculties and senior officials participate.

He insisted on keeping learning on campus for classes with fewer than 50 students, saying, "It's important to keep having that -face interaction because it's not as effective, as far as learning goes, to be completely online." 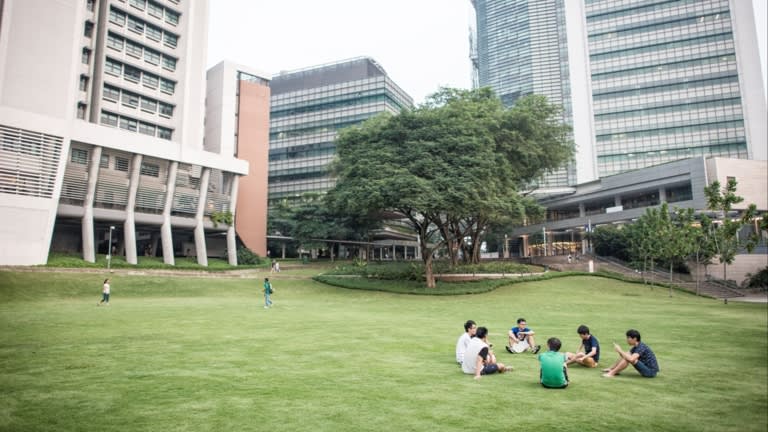 NUS students on a campus lawn before the pandemic: The university divided its three campuses into five zones to restrict contact between students during the outbreak. (Photo courtesy of NUS)

To keep coronavirus off campus, NUS first divided its three campuses in five zones to minimize interaction between students for approximately six months after the resumption of face-to-face classes in June of last year.

All students, faculty, and staff entering and leaving university buildings are monitored using Wi-Fi and an on-campus app. If people are in a different zone than the one assigned to them for more than 30 minutes, the app tells them to return to their area immediately.

While the Singapore government spearheaded efforts to keep track of people entering and exiting offices and business complexes, NUS quickly developed and adopted such measures on campus themselves.

In December last year, NUS also introduced a system to check sewage in bedrooms for signs of infection. After low levels of COVID-19 viral material were found in a bedroom in March, the roughly 400 residents were quarantined and tested for infection. All tests were negative.

Tan shrugs off the praise for the system and says, "It's actually pretty easy. I'd say most colleges that have an engineering department can do it." But not many universities can act so quickly and decisively to contain a crisis. According to Tan, since the outbreak of severe acute respiratory syndrome (SARS) in 2003, NUS has been ready to form a crisis management team at any time. 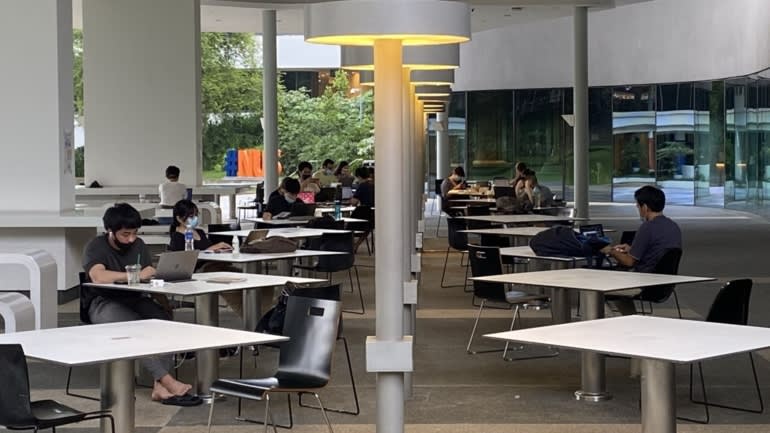 A student lounge on the NUS campus after the end of the semester in June. The university has worked to maintain face-to-face classes as much as possible.

In addition to its focus on maintaining classroom instruction, NUS works to offer professional support to students. NUS is known for its NUS Overseas Colleges (NOC), decades-old internship programs that aim to help students develop entrepreneurial skills in startups in places like Silicon Valley, Beijing, and Israel. During the pandemic, however, many students had to return home. To help them complete their courses, NUS organized internship programs with more than 100 national companies.

Biomedical engineering student Jeremy Ong was one of those interns. He attended the NOC program in Stockholm in mid-January 2020, only to be forced to return home two months later. Before his internship, Ong worked with other students on a project to train doctors and medical students in the use of virtual reality technology. His internship at a healthcare start-up in Sweden was something he couldn't skip. When his term was cut short due to COVID, NUS offered him a recommendation, which helped secure another internship opportunity as a project manager with a Singapore startup.

After graduating from NUS in June, Ong plans to establish an RV Assisted Physician Training Business this year. "The whole program, both in Stockholm and Singapore, was eye-opening. It was really an experience. I felt that if I didn't go to NOC, I wouldn't get it in school. It was something that only NOC offers," he said. NUS now offers on-campus internships to students who don't get a job. Amid the worst economic environment since Singapore gained independence, only 75% of last year's graduates found work, up from 90% before the pandemic. Still, NUS managed to fill the void with government assistance and internship programs. The university also established a fund to assist financially challenged students whose parents lost their jobs due to the pandemic.

In early May, Tan said that NUS was still running at "60%." NOC and its student exchange program will not be able to reopen when the next term begins in August.

"We believe that our students have to be exposed to real problems. The experiential component is more difficult to replicate," Tan said. "This is why we are most eager to make sure we send our NOC students first."

NUS constantly adjusts its curriculum to meet the needs of the time. Starting in August, for example, it will allow engineering students to take classes at the design and environment school, and vice versa. No end in sight for COVID-19 yet, but NUS is already looking beyond the pandemic.