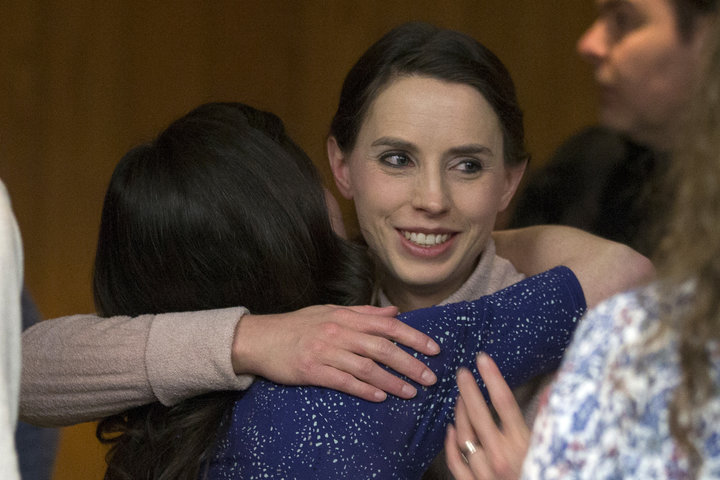 To mark the end of 2018, we asked the writers to review some of the events, people and ideas most notable (for better or for worse) of the year. See the other entries here between now and the new year.

There were only two weeks to go until 2018 when Kyle Stephens took the podium in a packed room in Michigan and he confronted Larry Nassar, the man who had Abused her as a child. It was Monday and the prosecutors supervising the case against Nassar were expecting 88 girls and women to appear in the coming days and read the victim impact statements as part of their sentencing process.

"You used my body for six years for your own sexual satisfaction, that's unforgivable, I've been coming for you for a long time," she said. And then he spoke the words that would spread throughout the world: "Maybe you've already discovered it, but little girls do not stay small forever, they become strong women who come back to destroy your world."

A week later, the number of girls and women who spoke increased from 88 to 156. Hundred Fifty-six. An army of survivors.

Reading a week of his statements was an anomaly in some aspects. In general, stories such as those told by girls and women are ignored or presented in cold, insensitive and brief news or writing.

Together, they took what was a tragedy and made it feel like a triumph.

These women and girls demanded to be heard and the coverage of the response was not filtered, for days and days, catching the attention of the international media, which in reality ended in punishment for the perpetrator. Nassar was convicted to 40 to 125 years in prison for sexual abuse. That was on top of a 60-year sentence for child pornography that he received in 2017.

But there was one aspect of what It developed that was overwhelmingly inspiring and transformative: one victim told his story publicly and another and another.

As the victims of Nassar saw others share their stories and confront their abusers, they wanted to do the same. Many put their names in the public registry for the first time, transmitting them to the world. Some were Olympic athletes, some current or former college athletes mostly gymnasts. Stephens was none of these; She was the daughter of friends of Nassar and his family.

They had been telling their stories and reporting their behavior since at least 1997. It took two decades until someone finally heard them, believed them and did something to stop them.

In total, more than 300 girls and women reported that Nassar attacked them.

Courage is based on courage. The Surviving Sisters who brought down Larry Nassar are an example par excellence. And I will never forget what they did and what they continue to do.

It was difficult to hear them all, sharing their experiences of not only abuses, but of so many people who did not believe them when they showed up, of institutions that ignored their reports and even of Members of the family they refused to listen to. Many of them cried or choked on their words, but even so, everyone spoke.

It was beautiful, a phoenix of voices emerging from the ashes of pain and trauma, a brotherhood of support and righteous anger. Together, they took what was a tragedy and made it feel like a triumph. To say that it was inspiring underestimated the impact of all this.

While they were in the courtroom and in front of the cameras, the survivors not only confronted the man who hurt them. They also repeatedly called the people and institutions that had failed them and enabled their crimes: the US Olympic Committee. USA, USA Gymnastics, Michigan State and its administrators, owners of gyms, coaches and coaches.

Throughout this year, they have translated those words into action. Some have testified before Congress about USA Gymnastics and the US Olympic Committee. UU., Continue by telling their stories publicly in the media ] are presented and manifested Meetings of the Michigan State Board ] are claiming in court and established one with the state of Michigan for a value of $ 500 million. They want to make sure that this never happens again.

We should all have similar goals. Perhaps the most important lesson we should all learn from the network still developing enablers around Larry Nassar is to listen and believe the survivors. This has been a feeling that is repeated frequently during the last year and it seems quite simple. But, in practice, clearly, it is not.

The most important lesson we should learn from the network of activators that is still being developed around Larry Nassar is to listen and believe the survivors.

When I think about what we saw in that Michigan courtroom in January, my mind goes to women who have told their stories repeatedly about R. Kelly (a recent screening of a new movie, "Surviving R. Kelly", had to be evacuated due to a bomb threat) . I think of the women who told The New York Times their experiences in a Ford plant outside of Chicago, or the fighters who denounced the abuse by a team doctor in the 1990s, or women who came forward on the USC gynecologist who abused hundreds of patients.

We are prepared to assume that allegations of sexual violence are as likely as false and true ( are not ), that nice men who are kind to us can not hurt others, and we must doubt girls' experiences and see women as dramatic and unworthy of confidence (there is a reason in the word "Hysterical" has the "uterus" as root). Starting from a place of believing and taking reports of abuse or violence seriously is a small but radical step in our society.

In sports, in particular, we must learn from these survivors. We have to let give priority to win above all, recognize that just because someone is in a position of authority does not make them inherently good and continue pressing sports media to improve the way you approach this problem.

Because this problem does not go away and ignoring it or calling it a "distraction" will only make things worse.

The last woman to give an impact statement to the victim was Rachael Denhollander the first woman to be publicly introduced on Nassar in September of 2016. His story in Indianapolis Star started all this. And it makes sense to end 2018 with his words from that day.

"Look around the courtroom, remember what you've witnessed these past seven days," said Denhollander. "This is what it seems when" someone abuses, others ignore it, and there is a culture "where a predator can flourish, without fear and without truce … This is what it seems like a court full of survivors who have deep wounds. Women and girls who have come together to fight for themselves because nobody else would. "

Jessica Luther is an independent journalist, author and co-author of the feminist sports podcast "Burn It All Down".