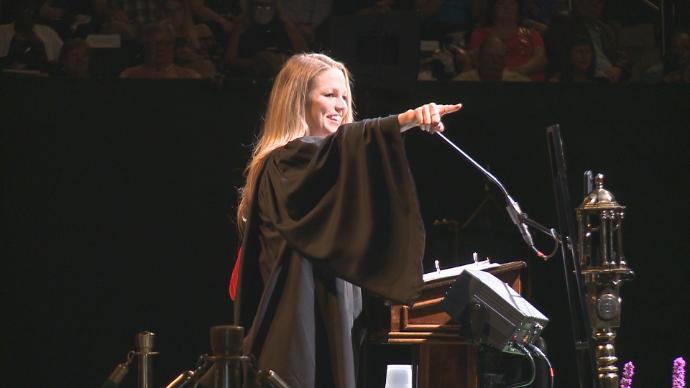 The sports personality of CBS returns to the University of Ohio; gives the address of the beginning

ATHENS, Ohio (WTAP) – This weekend, nearly 4,200 students participated in the graduation and undergraduate ceremonies of the University of Ohio. Students and their families gathered at the Convocation Center to officially move the tassels on their hats and leave the building as students.

It was the first spring start for Dr. Duane Nellis, the president of Ohio University. He says: "{The graduates} are following a tremendous group of over 230,000 alumni from the University of Ohio who are doing amazing things in the world and I just want them to have the power and impact that really is transformative. "

On Saturday, those who attended the undergraduate ceremony learned of a nationally known sports personality and student at the University of Ohio, Allie LaForce.

President Nellis says she was elected through a student nomination process. "She is really a pioneer and breaks with women in sports broadcasting and we are very proud of her and her leadership, she is truly indicative of the outstanding Scripps School of Journalism we have here at the University of Ohio."

LaForce was surprised when he received the invitation. She explains: "When I received the email or call from President Nellis's office, I thought it was a joke at first, so I took a screenshot and sent it to my roommates at the university and I said: Do you think it's serious if I answer? Because I just could not believe they had already asked me. "

"I tell you that when I arrived in Athens, I realized that this is the most beautiful place in the world, and I have the luxury of covering college sports to make a living, so I've been to almost every campus and there's nothing like Athens, Ohio, "says LaForce.

Early in her career, LaForce was selected to join "We Need to Talk" on CBS Sports, the first ever sports television show presented entirely by women. She is currently the host and panelist for the pioneer show.

LaForce explains being a woman in sports during her speech. "People ask me all the time, 'Is it difficult to be a woman in sports?' I tell them no, not because it's never difficult, of course it is, but everything is difficult, life is hard, it's also wonderful and scary, heartbreaking and stimulating, and guess what, you're a Bobcat, you can handle it. "

President Nellis says the school is proud to call it Bobcat. "Her energy, her enthusiasm, but she's still deeply rooted and has an important message for our students."

In her graduation speech, LaForce advised graduates to be smart when using social media. "Use your youth and use your social networks for your benefit, but do not let it force you to integrate"

She says: "I would just say that I got to where I am because of the University of Ohio Period."