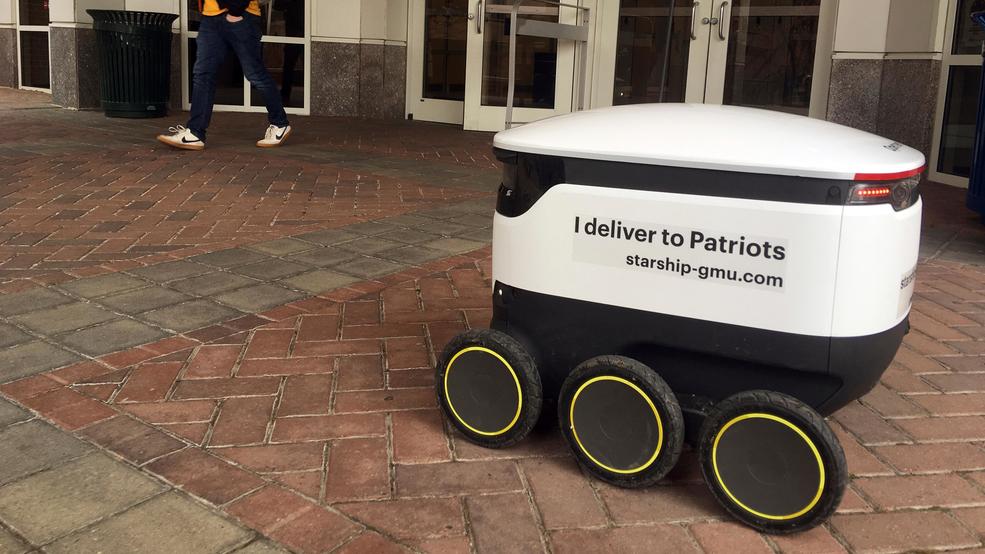 A fleet of high-tech robots has been deployed at a university in Northern Virginia for the noble purpose of delivering pizza, donuts and coffee to students upon request.

Ryan Tuohy, senior vice president of business development at Starship Technologies, based in San Francisco, which makes the robots, said hundreds of delivery orders were made on the first day of service.

"You can see the robot as it approaches you on your phone," said Ryan Tuohy with Starship Technologies, the company that made the robots. "It notifies you when you're there, and then your smart phone with the one you requested is the only way to unlock it."

The company's partnership with Sodexo, which has the catering contract at George Mason, means that students can get deliveries of Blaze Pizza, Starbucks and Dunkin for a fee of $ 1.99. A convenience store is also participating and more suppliers are expected to join the program later.

Six-wheel robots can scale curbs and hold up to 20 pounds (9 kilograms) of cargo.

The robots drew smiles and bewildered looks from the students who stopped to take photos as they roamed the campus on Wednesday making lunch deliveries.

Justin Plassmeyer, a computer science student, received a pizza delivery on Wednesday as his friends. I observed and took pictures. The robot took about eight minutes to make a delivery that a person walking briskly could have done in five. The robots slow down a bit because of the need to use ramps instead of stairs.

ABC7 followed a robot while making a delivery of pizza to the other end of the campus. The students on the reception side said that the pizza was still very hot when they arrived, and they were happy that they had not had to walk more than half a mile to buy it themselves

Robots do not enter. buildings but will be delivered to the exterior of any building on the campus.

"It's not the fastest thing in the world," said Plassmeyer. "If you're really hungry, it's probably faster to walk and get your food, but if you're a little hungry, it's perfect," he said. He also said he appreciates the novelty of "having a little robot bring your food."

Tuohy said university campuses are an ideal setting for Starship's robots to operate: university students are interested in technology and innovation and on campus grounds are usually pedestrian. Robots can not go up and down steps, but campuses are required to be wheelchair accessible under the Americans with Disabilities Act, Tuohy said, "so there will be a ramp somewhere."

Robots are learning The fastest routes to navigate the campus, and over time they will learn to avoid busy traffic routes, willing to travel a longer distance if they can save time by moving faster on a less traveled road.

The robots are "very deferential" and will stop if they detect pedestrians to avoid collisions, said Tuohy.

Starship says its implementation is the largest implementation of autonomous robot food delivery services on a university campus. A similar service launched earlier this month by a different technology company at Pacific University in Stockton, California.