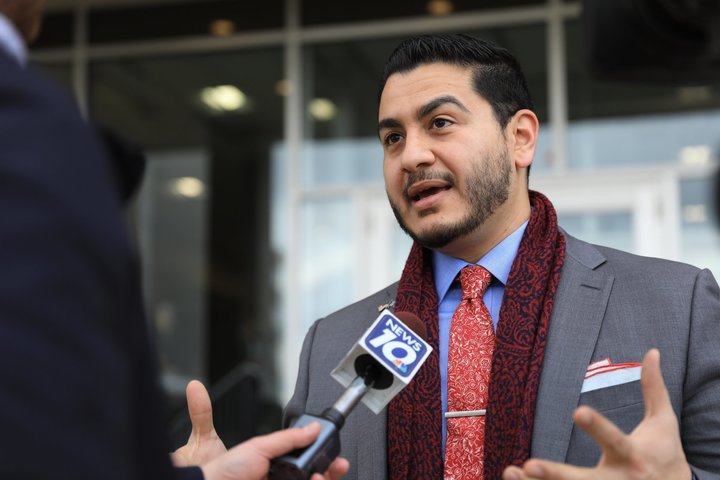 ANN ARBOR, Mich. – Representative Debbie Dingell suggested on Saturday that Muslim Democrat Abdul El-Sayed, a fellow Democrat seeking the party's gubernatorial nomination in Michigan, would face more obstacles because of her faith in the general election than the candidate she supports.

Dingell, like virtually the entire Democratic establishment in the state, supports Gretchen Whitmer, the former Michigan Senate minority leader who leads the surveys in August 7 primary.

After Dingell spoke at a rally organized by the Michigan Nurses Association, a union in a contractual dispute with the University of Michigan Health System, HuffPost asked Dingell why he was supporting Whitmer.

"We have to win" the seat of the open governor, replied Dingell. "We hope that Abdul stays very involved in public policy, I think he's one of the brightest people I know."

"But there's a lot at stake for the men and women who work in this election, "he continued." And I think [Whitmer’s] is the strongest candidate to win in the general. "

Dingell, who represents the Muslim center of Dearborn, was asked if she believes Michigan is not ready to elect a Muslim as governor.

" I do not want to say that because I think [El-Sayed’s] is fabulous, and I represent one of the largest Muslim populations in the country, "he said." But there are people who try to divide us by fear and hatred, and [President Donald Trump] is one of them. "

Dingell's comments reflect the challenges The only ones facing El-Sayed, a former director of the health department of Detroit, and other Muslim Americans who are running for office. They are often forced to respond not only to unfounded allegations made by Islamophobes, but also by alleged allies concerned that other people's prejudices towards Muslims make their candidacies politically unfeasible.

State Sen. Patrick Colbeck, one of four Republicans in the Gubernatorial primaries of the Republican Party, has already alleged – without any evidence – that El-Sayed is an agent of the Muslim Brotherhood engaged in a "civilizing jihad" against the United States. (Although he does not normally make these accusations out of fear of giving them credit, El-Sayed in an interview last year strongly denied any link with the Muslim Brotherhood or that it was part of a conspiracy to impose Sharia law in the United States)

El-Sayed's response to skeptics of his eligibility is to remind another man with a funny name that nobody thought he could win: former President Barack Hussein Obama.

When asked about Dingell's comments, El-Sayed repeated to HuffPost a story he shared on Saturday at a barbecue demonstration in the East English Village neighborhood of Detroit. As the best student of his undergraduate class at the University of Michigan in 2007, El-Sayed gave a speech to his fellow graduates. Former President Bill Clinton, the main speaker at the graduation ceremony, praised El-Sayed after his speech, suggesting that he run for office instead of attending medical school.

We will win because we have the honesty and humility to listen, learn and speak with all the inhabitants of Michigan.
Abdul El-Sayed

"I do not know if that will be possible for me," El-Sayed reminded Clinton.

El-Sayed's sense of what was possible changed radically after Obama's election the following year, however. "It was the first time I saw myself in a politician," El-Sayed told HuffPost.

"We will win because we have the honesty and humility to listen, learn and speak with all the inhabitants of Michigan," he added. "That's what the people of Michigan are hungry for, no matter what my name is or how I pray."

There were some signs in the campaign stops on Saturday that the Obama analogy it resonated with black voters.

After El-Sayed's speech at a meeting of candidates in a housing complex for seniors in Detroit, Mario Morrow, a former student of Kappa Alpha Psi, the historic black fraternity host of the event, approached the microphone to make some announcements before getting to official business, Morrow, who has not endorsed the race, had some kind words for El-Sayed.

"I remember a guy named Barack Obama who said they could not win either, so he keeps working hard," Morrow said spontaneously. (El-Sayed had not used the anecdote of Obama in his comments at that stop)

Eric Pate, the regional president of the fraternity's political and social action, said that if people they had a "two cents" brain, they would listen to what El-Sayed had to say, instead of paying attention to the conspiracy. theories of Colbeck et al.