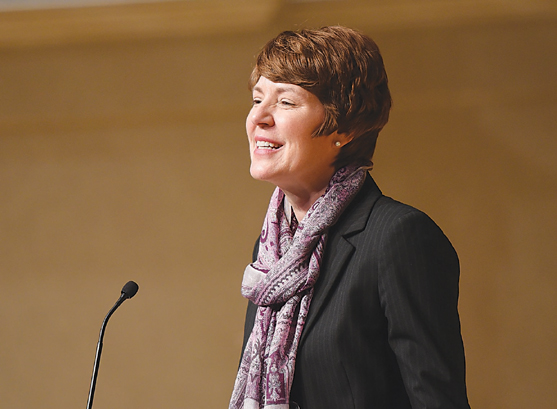 By KATHRYNE RUBRIGHT
Staff Writer
BLUFFTON – Incoming President of the University of Bluffton, Jane Wood, is excited about her new job for several reasons, she said. on Monday in his presentation to the campus.
She is excited about the future, especially with regards to "disruptive technology".
Students are preparing "for careers that have not yet been invented," Wood said. "Not since the invention of the printing press, has the world been as disturbed as it has been with the advent of the Internet."
That interruption is not all bad, he said. Wood awaits the opening of the new Austin E. Knowlton Science Center in Bluffton.
Wood also said she is excited to explore "the enduring questions of our time" with the campus and the community.
"Each generation of students needs to recognize and address social justice or the injustice of their time." Bluffton University can continue to differentiate and nurture its identity through the continued pursuit of peace and justice, "he said, adding that the world it lacks "civil discourse and significant commitment".
Wood praised "the mission and core values ​​of the institution: discovery, community, respect and service."
Wood said that "higher education faces a moment of significant change," but added that "what I believe that it will remain true in higher education is exactly what has made Bluffton University a stable presence for 119. The tradition of higher education … will not fail, nor will it fail. "
Wood said she is "excited to see the good work of President James Harder and the presidents who preceded him in affirming the value proposition of a small, quiet, Christian university."
Harder will retire on June 30 . He has served as president since August 2006.
Wood is currently vice president of academic affairs and dean of Mount Marty College in Yankton, South Dakota. He previously served in the same position at Westminster College in New Wilmington, Pennsylvania.
He also worked for Park University in Kansas City, Missouri, and Baker University in Baldwin City, Kansas.
Their titles are all in English literature: a bachelor's degree from the University of Missouri and masters and doctorates from the University of Kansas.
She was one of the more than 50 people who applied for the position.
"We believe Jane Wood has all the attributes identified in the presidential profile," said Cheryl Hacker, vice president of the board of directors, who led the presidential search committee.
He praised Wood's past success in increasing enrollment and building relationships.
"She is a collaborator, she is a Christian committed to leadership and experience in Catholic and Protestant institutions, and has a passion for social justice She is of the Methodist faith and exemplifies the values ​​of Bluffton," said Hacker
] The committee sought "a visionary leader capable of prioritizing and leading with ideas, while building trust among all Bluffton groups, and a person of Christian faith who understands, embraces and reflects the Mennonite values ​​that underlie Bluffton," Hacker said.
The search committee included board members, teachers, staff, a student, a member of the community, the president of the Bluffton University Alumni Association, a representative of Mennonite Education, Agency representatives and alumni of the Conference. Ohio and the Central District Conference of Mennonite Church USA. UU
Rubright: 419-427-8417
Send an email to kathrynerubright
Twitter: @kerubright