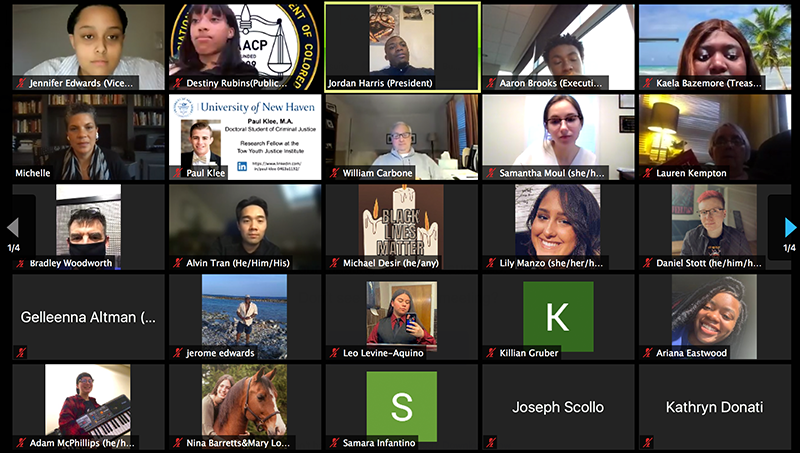 The best-selling author tells the university community: "I hope we dream big and don't settle"

Michelle Alexander, a civil rights attorney, advocate, and author of an award-winning book that inspired a national conversation about mass incarceration, spoke with the university community following the verdict in Derek Chauvin's trial, encouraging students to "be brave."

By Renee Chmiel, Office of Marketing and Communications

Jennifer Edwards '21 and her fellow Chargers recently had the opportunity to engage in thought-provoking conversation with Michelle Alexander, an acclaimed author and legal expert. Edwards says it was an opportunity for her and her classmates to discuss systemic racism and justice system reform at a critical time in the nation's history: the aftermath of the guilty verdict in the trial of Derek Chauvin, the officer Minneapolis police officer convicted of murder. George Floyd.

"I am very grateful for this experience," said Edwards, a forensic science student and vice president of the University's NAACP chapter. “We were so inspired by this discussion and we are grateful to be a part of it.”

Edwards introduced Alexander, who addressed the college community as part of "An Evening with Michelle Alexander," an event organized by the University's NAACP chapter. He spoke to the university community on the same day as the verdict, which he says "provided some answers, but also raised more questions."

"We have come to confuse punishment with responsibility," he said. “What would accountability be like in this situation? We have been prevented from even imagining what genuine responsibility would look like. But the verdict represents some recognition that George Floyd's life matters and that what happened was wrong. "

" I hope we are as brave as the freedom fighters who came before us. "

A civil rights attorney, legal scholar, and advocate, Alexander is the author of The New Jim Crow: Mass Incarceration in the Age of Colorblindness, an award-winning and successful book that inspired the national debate on mass incarceration. Now a visiting professor of social justice at Union Theological Seminary in New York, Alexander has spoken about the disenfranchisement of black people in everything from politics, including electoral taxes, to the criminal justice system.

Alexander suggested reinventing the political system so that it is not structured as a "pay to play" system and encourages more opportunities for representation and participation. Speaking of mass incarceration and the war on drugs, he explored what "justice" really means in the United States.

"Getting millions of people in and out of prisons and jails has little to do with addressing the problem of violence," he said. “It is about managing and controlling the dispossessed, such as the poor, those with mental health problems and the marginalized. This is how the system really works. "

A graduate of Stanford Law School and Vanderbilt University, Alexander says she has learned to listen and admit when she is wrong. She encouraged students to keep an open mind, saying it will allow them to keep learning. In predicting more challenges, changes, and uncertainties to come, he urged students to consider how they would respond.

"This is a time when our political and economic systems will be called into question," he continued. “I hope we are as brave as the freedom fighters who came before us would like. I hope we dream big and don't settle. "