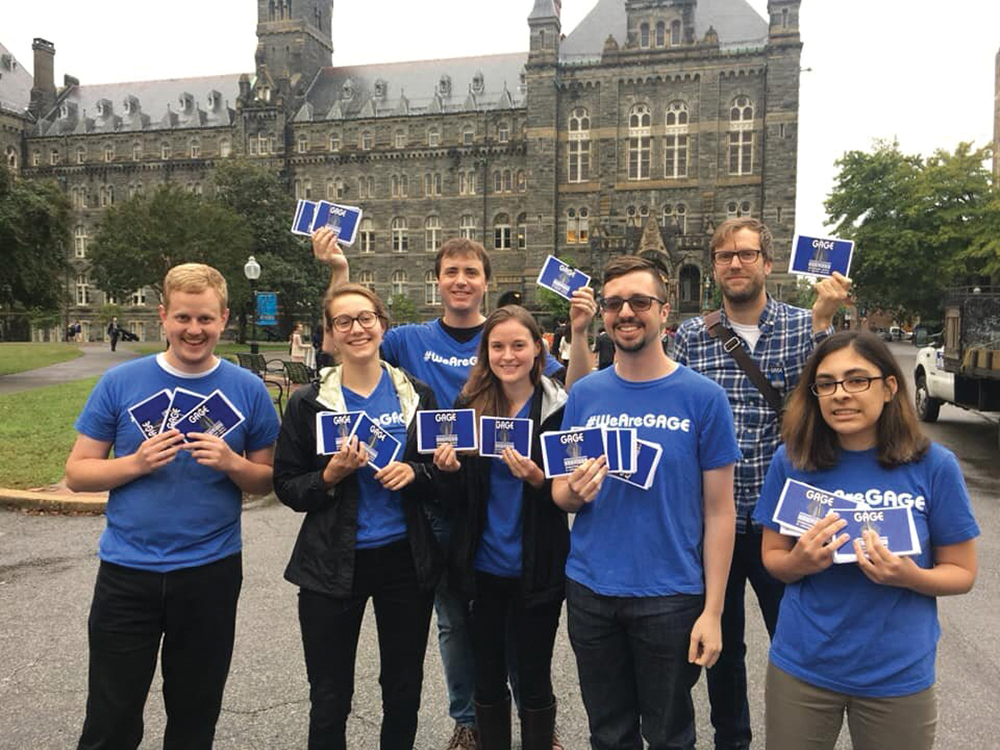 The arbitrator finds that the university violated the contract with GAGE ​​

An independent arbitrator ruled in favor of the Georgetown Graduate Employees Alliance in an arbitration case with Georgetown University, stating that it did not negotiated in good faith specific policies related to the COVID-19 pandemic.

The January 19 decision resolves the collective bargaining dispute between the two parties, after the university formally denied GAGE's motion of complaint on October 8 that alleged the university had stalled negotiations with the union. After the matter went to arbitration, both parties submitted documents presenting their respective interpretations of the union's Collective Bargaining Agreement ratified in May 2020, which officially recognized GAGE ​​as a union and detailed the contractual provisions.

The union filed lawsuits to negotiate with the university in July 2020 regarding health protection, wage security and unlimited paid sick leave for remote workers. After private bargaining sessions occurred in the weeks leading up to the fall semester, the union expressed its desire to resolve the negotiations with the university in a written letter of agreement. GAGE filed a complaint in September 2020, resorting to arbitration procedures based on claims that the university violated the union's contract by breaking negotiation on its fall reopening policies. Throughout the arbitration proceedings, union members have organized protests and written letters to support GAGE ​​in defending the contract.

The university's refusal to document its negotiation agreements in writing was a primary violation found by the arbitrator, Ira Jaffe, according to the Jan. 19 GAGE ​​press release.

"Mr. Jaffe further found that Georgetown violated its obligation to negotiate in good faith when it refused to enshrine any agreement between GAGE ​​and itself in a written agreement, calling the refusal "concerning" and ordering the parties to document future agreements. " press release reads.

The arbitrator specified mandatory topics on which the university must re-negotiate with GAGE. These items include access to personal protective equipment, COVID-19 testing and vaccines and service subscriptions according to Ari Janoff (GRD '24), GAGE ​​grievance officer.

A crucial part of the ruling stipulates that future policy proposals regarding graduate student concerns be agreed by both parties and not adopted solely by the university, according to Janoff.

“It is not enough for the University to unilaterally adopt the proposals of the Union as University policies without reaching a written agreement with the Union, ”Janoff wrote in an email to The Hoya.

Although the arbitrator ruled that the union could not reiterate issues about reopening, protections for graduate students or COVID-19 policies that were already discussed during contract negotiations, the decision gives GAGE ​​the right to re-negotiate on COVID-19 policies that it did not previously discuss, according to the press release.

"For its part, GAGE ​​has already requested negotiations with Georgetown on COVID-19 issues in the workplace as soon as possible, albeit with a more limited scope," the press release reads.

The arbitrator's decision also affirms the right of the university to implement policies, such as the Community Pact, which establishes social distancing guidelines for community members in the area, in response to the COVID-19 pandemic, according to a university spokesman.

“The arbitrator's decision confirms the broad scope of the University's management rights and prerogatives under the collective agreement (CBA) and recognizes that the University has the right to issue policies, including the Community Pact, related to the operation of the University. during the COVID-19 pandemic, ”a university spokesperson wrote in an email to The Hoya.

The arbitrator's ruling establishes that the university did not breach its obligation to negotiate in good faith with GAGE, despite issues related to the Community Pact and the need to register certain agreements, according to the spokesperson.

"This empowers GAGE ​​in future informal interactions and formal negotiations with the University," Tsoi wrote in an email to The Hoya.

The decision should indicate to the university that GAGE ​​will fight to protect the rights of graduate workers, according to Zac Park (GRD '22), who also serves as an officer of the GAGE ​​executive council.

"Besides being able to get back to the negotiating table with the University, this whole process has also sent them a very clear message," Park wrote in an email to The Hoya. “That message is that we will fight as hard as necessary to ensure that GU graduates are guaranteed safe, fair and equitable working conditions.”