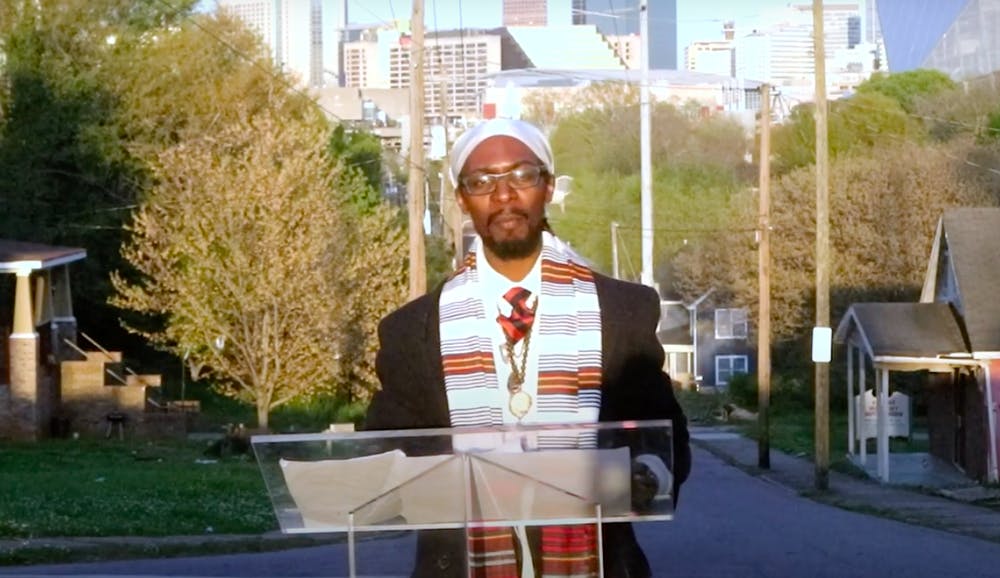 The University officially dedicated Saturday to enslaved workers in a culmination of more than a decade of community and student activism around the building of the monument. Numerous teachers, alumni, students, community members, and descendants of enslaved workers spoke at the dedication, which was broadcast virtually.

The ceremony was part of a series of virtual events designed to celebrate the legacy of the enslaved workers of U.Va. and their descendants this weekend. At noon. On Friday, the university community participated in a moment of silence, during which the descendants opened the water source of the Monument to the Enslaved Workers. Later that day, descendants of enslaved communities in U.Va. hosted its first public event – a virtual panel discussion on Commonwealth descendant communities. Take 6, a Grammy Award-winning a cappella group, will also perform in a virtual concert celebrating the dedication on Saturday at 7pm.

The dedication was originally supposed to take place over a year ago, but was postponed due to the pandemic. The Memorial, which was proposed more than a decade ago, was officially completed last spring.

To begin the dedication ceremony, Class of 2019 student Jessica Harris took a brief tour of the monument and the Reverend Alvin Edwards led a prayer.

University President Jim Ryan began his remarks by quoting Isabella Gibbons, an enslaved worker who learned to read and write while enslaved at the University and established a school in Charlottesville for freed black individuals after their emancipation in 1865. Gibbons House was named after Gibbons and her husband William in 2015, and Isabella's eyes are etched into the stone outside the Enslaved Workers Monument.

"It is his words and his eyes through which we can feel the past, reach for the stone of the Monument to the Enslaved Workers and move us to better understand injustice in a year in which we have too often suffered anguish, isolation and loss" said Ryan.

In the context of the past year, which has included a global pandemic, challenges to democracy, and global social justice movements protesting the deaths of black citizens at the hands of law enforcement, the monument serves as an especially important symbol. of "healing and connection," Ryan said.

"I would like to express my deep gratitude for the work of so many at U.Va. and in the local community to dream, visualize, design, research, collaborate, build and engrave the monument. " Ryan said. “His work will be remembered as long as the granite with which the monument was built.”

Ryan also addressed families linked to the names, vocations, and memory marks that appear on the monument. More than 4,000 free and enslaved workers worked and maintained the University between 1817 and 1865; the Monument to the Slave Workers lists the known names of enslaved workers as well as 4,000 memory marks in recognition of those whose names are unknown.

"Their ancestors often worked anonymously, facing violence and harassment and not under their free will to build the University of Virginia," Ryan said. “It is to them we owe our deepest gratitude. May this memorial provide their families with a measure of comfort in a step towards spiritual reparation. ”

Class of 2011 alum Ishraga Eltahir and Class of 2009 alum Khalifa Sultan Lee spoke about student engagement and advocacy behind the monument. Eltahir is the founding chairman of the Slave Workers Memorial Student Committee, while Lee is a member of the winning team of the 2011 Memorial Design Ideas Contest. Eltahir described being at the dedication ceremony 10 years later as "surreal."

"A physical monument is important and a long-awaited addition to the University, but it is by no means an end to the simultaneous dismantling and construction work that still needs to be done," Eltahir said. "Even as we celebrate and congratulate, let's get serious about it."

"People commemorate what is important to them, and with this monument, the commission helps us ensure that the hidden lives of enslaved workers are now publicly remembered for their importance to the University of Virginia," Sullivan said.

Both Prof. Kirt von Daacke and Prof. Marcus Martin, PCSU co-chairs, spoke about the commission's work and thanked Sullivan and the Board of Visitors for their support during the development of the monument.

"We acknowledge the past and must learn from it, but we will never forget the horrors and dehumanization of slavery," Martin said. "Let us aspire, on this momentous occasion and beyond, to become a more inclusive, equitable and just society."

Numerous descendants of enslaved workers also spoke about the personal significance of the monument. One of the descendants, Carol Malone, a descendant of Peyton Skipwith, a University enslaved worker who was freed in 1833, spoke about what it was like to see the names of her family members on the Enslaved Workers Monument

"On behalf of the descendants of Mr. Peyton Skipwith, seeing his name on the Enslaved Workers Monument fills my heart with pride and sadness," Malone said. “We are proud of you, Peyton Skipwith, and we love you. Your spirit united us ”.

Malone spoke about Skipwith's love of education and his family and his skill as a mason in cutting stones that were used in the construction of University buildings until 1833. In 2017, the University dedicated Skipwith Hall, located on the same grounds as The Skipwith quarry worked while enslaved, in his honor.

Jayla Hart, a senior and Salem Zelalem, a senior at FLUX Poetry and Spoken Word at U.Va. then he interpreted the poem "My serpentine".

Deteasa Gathers, a Charlottesville resident and co-chair of the Descendants of Enslaved Communities Leadership Group, spoke about how she learned more about herself through her work developing the monument. Gathers also highlighted the importance of ensuring that descendants "continue to have a place at the table".

“I want the next brunette girl like me to understand that they come from people who are resilient, people who worked hard, people who worked for this community and not just for the University of Virginia,” Gathers said. "That is why it is important to continue with this story."

Gathers introduced Bertha French, co-chair of the Descendants of Enslaved Communities Leadership Group and an alumnus of the class of 1990. French, a descendant of enslaved workers, shared her family history, which she has discovered through oral histories and archival research. French highlighted the important work being done by descendant communities across the country to investigate and recover the narratives of free and enslaved workers

“Descendant communities are highlighting the fundamental dominance of race-based slavery, white supremacy, and the colonial systems that were played into building many of our nation's institutions, including our current systems of finance, education, healthcare. and housing, ”said French.

As part of its work, the DEC at U.Va. locates and reunites descendants of free and enslaved black communities who worked at the University. To date, forty descendants have been identified.

“The DEC in U.Va. views the University of Virginia as an African American historic site built by the more than 4,000 enslaved workers identified through archival research led by the University and whose biographies continue to be unearthed by our organization, ”French said. "The University literally wouldn't be here if it weren't for our ancestors."

To conclude the dedication ceremony, the Chapman Grove Baptist Church Choir performed "Raise Every Voice and Sing" while displaying the well-known names of the enslaved workers.