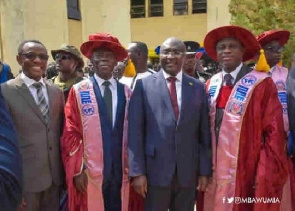 Tertiary private institutions struggling – Rector of the University of Pentecost

The rector of Pentecostal University College, Dr. Daniel O. Walker, cited unfavorable conditions in the education sector as a threat to tertiary education in Ghana.

Dr. Walker spoke at the 10th graduation ceremony of the university in Sowutuom, where some 820 students graduated with diplomas, master's degrees and others in various fields of study.

The College leadership has also made an ambitious commitment to build more high schools in the coming days to support the policy of the SHS policy Overnment policy.

The university has also committed to installing prisons, composed of CHIP and also intensifying its sanitation campaign.

He believes the gesture will support the government's development agenda halfway.

The government led by Addo Dankwa Akufo-Addo has won international admiration with his bold and ambitious talk of building "Ghana beyond aid", something the Rector praised and called on well-intentioned Ghanaians to support him.

Vice President Dr. Mahamudu Bawumia, who also attended the graduation ceremony, praised the leadership of the university and commissioned them to develop a rich curriculum and provide first class instruction to train students.

Dr. Bawumia also pledged government support for the search of the university to become autonomous.

He also praised the graduates and urged them to be ambitious in their pursuit of greatness and not listen to the detractors who discourage them from taking initiatives.