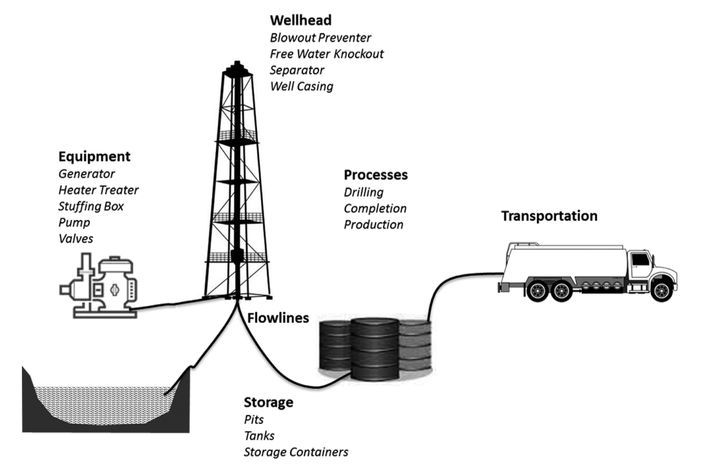 A controversial method of extracting oil and natural gas known as hydraulic fracturing, or fracking, has caused thousands of spills in four states over a 10-year period, according to a new study.

Researchers at Duke University identified 6,648 spills related to hydraulic fracturing in Colorado, Pennsylvania, New Mexico, and North Dakota between 2005 and 2014. Hydraulic fracturing uses a stream of water, chemicals, and sand to high pressure to exploit rock formations and extract oil and gas deposits. Many of the spills in the investigators' count include hydraulic fracturing fluids, sewage, and hydrocarbons, all of which may contain chemicals hazardous to drinking water resources.

The findings were published this week in the scientific journal Environmental Science & Technology and have raised the concerns of many environmental activists who have long opposed fracking. "We are alarmed, but not surprised [by the number of spills]," said Seth Gladstone, deputy director of communications for the environmental advocacy group Food and Water Watch. "We have seen the evidence and heard the stories about countless leaks, explosions, fires, human health effects, and employee safety issues, all related to fracking."

Fracking has been a contentious topic for environmental groups and fossil fuel corporations for nearly a decade. The Duke study found that up to 16 percent of fractured oil and gas wells leak each year.

While research has linked fracking to earthquakes and contaminated drinking water in some parts of the country, proponents of fracking say the procedure is safe. Nicole Jacobs, a spokeswoman for Energy in Depth, an industry-funded research group, said the thousands of spills identified in the study are not a major concern.

"It is important to keep studies of this nature in context," Jacobs told The Huffington Post in a statement. He noted that not all spills associated with the hydraulic fracturing process were hazardous material. “There were freshwater spills included in the study, including the largest spill in the report, and… a vast majority of spills are small and contained within the site.”

The most important conclusion of the study may not be the number of spills, but how they are recorded, said Lauren Patterson, lead author of the Duke study and a policy associate at Duke University's Nicholas Institute for the Environment. Policy solutions.

For example, North Dakota, a stronghold of oil and gas production, reported the highest number of spills, with 4,453 incidents. Pennsylvania had the second highest rate with 1,293, followed by Colorado with 476 and New Mexico with 426.

Patterson said the disparity can be attributed in part to different state laws on spill reporting requirements, with North Dakota requiring the reporting of smaller spills than Colorado and New Mexico. Differences in data collection pose a challenge for regulators seeking a more complete understanding of where and when spills occur at the national level.

A 2015 EPA report on hydraulic fracturing found only 457 spills in these states and another four between 2006 and 2012, although that report had only accounted for spills related to rock fracturing, not the full cycle of production, which also includes transportation and storage. Fifty percent of the spills recorded in the Duke study were related to leaks in storage or pipelines.

Some states are not explicitly required to report the cause of a leak, posing a challenge for regulators looking to mitigate spills. The Duke researchers hope their new study will prompt state legislators to revamp the data collection system to help regulators better understand the environmental impacts of fracking.

"Analyzes like this are very important in defining and mitigating risk to water supplies and human health," Kate Konschnik, director of the Environmental Policy Initiative at Harvard Law School, said in a press release. "Writing state reporting rules with these factors in mind is critical to ensure that the correct data is available, and in an accessible format, to industry, states, and the research community."

While fracking accounts for more than two-thirds of US natural gas production, the process did not become common industry practice until a few years ago. In 2010, there were nearly 26,000 hydraulic fracturing wells across the country. By 2015, the number of wells had skyrocketed to roughly 300,000. Proliferation is credited with creating the recent oil and gas boom in the United States, to the dismay of environmental groups.

Despite the fact that most Americans believe that the United States should focus on developing renewable energy rather than fossil fuels, it appears that the proliferation of hydraulic fracturing wells is not slowing down anytime soon. President Donald Trump said last August that he supported state-level fracking bans, before backing down the following month.

"You will get that business," Trump told fracking executives at the Shale Insight conference in September. "You're going to like Donald Trump."

Democratic lawmakers have accused several members of Trump's cabinet, including former ExxonMobil CEO and Secretary of State Rex Tillerson, and the new director of the Environmental Protection Agency, Scott Pruitt, of prioritizing the interests of the fossil fuel industry on environmental protections.

Gladstone said it is critical to have "up-to-date access and reports on industry activities" under the Trump administration.

“With this new administration so deeply tied to the oil and gas industry,” said Gladstone, “it is more important than ever at the local and state level to build power and hold accountable our local and state officials resist the pro-agenda. polluters. ”

How will Trump's first 100 days affect you? Sign up for our weekly newsletter and get up-to-the-minute updates on the Trump presidency by sending us a message here.