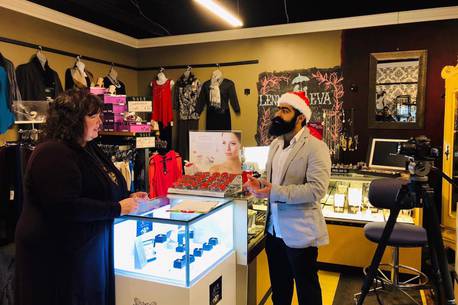 SYDNEY, N.S. – A holiday theme project aimed at attracting the attention of local business owners was launched this week by students from Cape Breton University at their club Enactus.

Group members are business-minded people who see business as a way to address social problems.

The project called "12 days of local" began on Monday with shared videos on its Facebook page (www.facebook.com/EnactusCBU). It will continue until December 20.

The idea of ​​interviewing a dozen local businesses in the Cape Breton Regional Municipality before Christmas was proposed in September by Enactus CBU vice president of business relations, Michael Wilson.

"I created the 12 Days of Local project because I felt that the locals within the CBRM tend to travel to other places to buy, buy online or buy from larger stores that are not owned and operated locally during the holiday season," Wilson Said in a statement.

"Each of the 12 companies has something different to offer, which gives the public a multitude of options when they buy locally for that special person."

He said the goal is to ensure that the money earned here stays in Cape Breton and, in return, will help the economy by keeping local store owners in operation.

The videos are a reminder for people to think about local shopping, not just at Christmas, but at any time of the year, Wilson added

Enactus Cape Breton University was founded in May by President Michaela Epifano and Brooklyn Galbraith. The group currently has about 25 members.

In September, the first project created by the Enactus Cape Breton University consisted of giving an intensive media course to business students at the university. The course taught students the basic concepts of graphic design and social media marketing.

Enactus is a non-profit student organization represented in more than 36 countries with 70,000 participants. Members focus on social, economic and environmental projects.

In March, CBU members will compete in the Enactus regional competition in Halifax.

For more information about Enactus Cape Breton University, visit its website at enactus.ca/