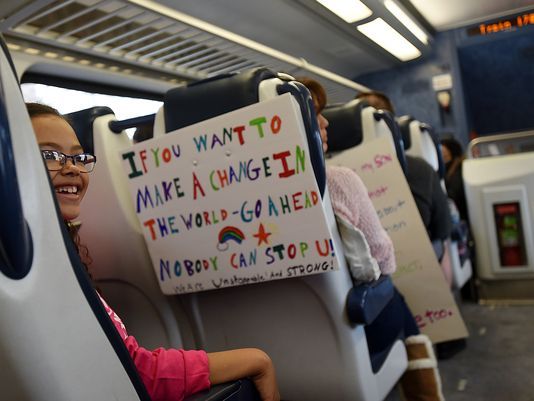 Signs of women from March 2018 to be picked up, kept by Rutgers University

March of the Women in Morristown on Saturday, January 20, 2018.
Michael Karas / NorthJersey.com

Eden Hamlin, 8, of Glen Rock takes the train to the March of Women in New York on Saturday, January 20, 2018. This was the second of Eden March. (Photo: Anne-Marie Caruso / NorthJersey.com) ]

Archivists at Rutgers The University is asking protesters who participated in the March of Women in Morristown, or one of several marches in the state on Saturday, to donate their posters, posters and memories for future scholars to study.

The donated items will be part of the Women's March Archive Project in the special collections and university archives of Rutgers.

"The Women's March Archives Project is gathering these materials to document these historical events for future scholars and students," library officials said in a statement.

Thousands converged on Morristown for the Women's March in New Jersey, one of hundreds of events held on Saturday, January .20, 2018, across the country to mark the first anniversary of the Women's March of 2017 in Washington, the largest single day protest in the history of the United States. (Photo: Bob Karp / Staff Photographer)

On Saturday, thousands of women, men and children across the state took to the streets of Morristown to demand social and political change.

Residents of Leonia Marianthi Zikopoulos and Jacques Fomerand hold posters at the Women's March in the district on Saturday, January 20, 2018, which attracted hundreds of participants. (Photo: Marko Georgiev / NorthJersey.com)

Hundreds more marched in a protest on Broad Avenue in Leonia. The demonstrations took place a year after the first demonstrations were held throughout the country to protest the inauguration of President Trump.

The project focuses on women marches that took place in New Jersey.

Marching in Leonia: March movement of women takes to the streets

Those who want to donate their signs or other memories can contact Rutgers' Special Collections and University Archives at 848-932-7510 or send an e-mail to scua_ref@libraries.rutgers.edu.