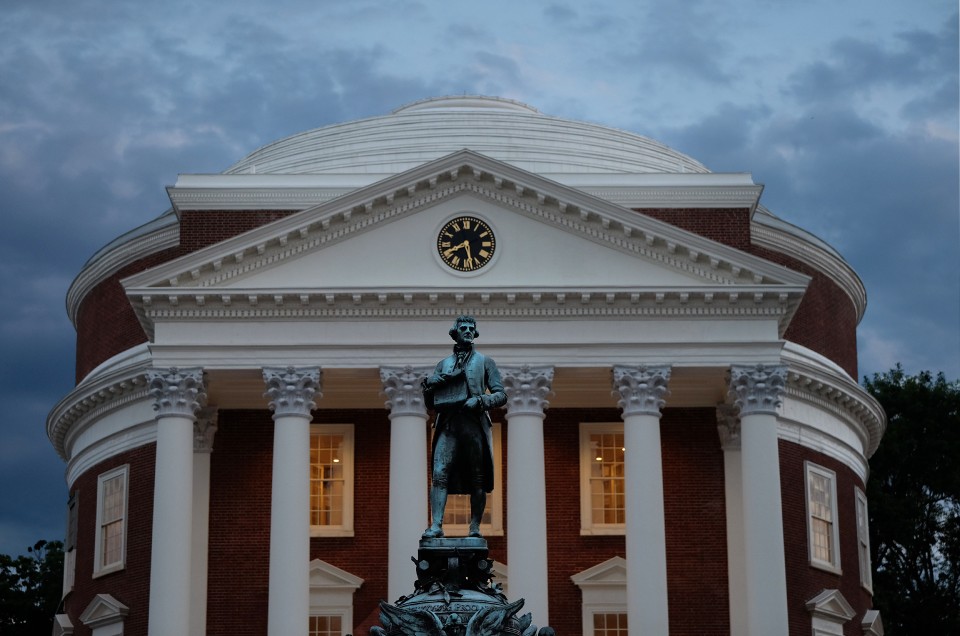 Racial Prejudice in Campus Discipline: When Will Universities Look in the Looking Glass?

A statue of Thomas Jefferson in front of the Rotunda at the University of Virginia in Charlottesville on Friday of June 10, 2016. (Photo by Norm Shafer / For The Washington Post).

A new federal data analysis on how students are disciplined in K-12 schools found that black children were much more likely than their white peers to suffer consequences for their actions in 2013-14, and the report noted that "implicit basis" can be a cause.

These K-12 data are collected and analyzed routinely by the federal government, but the same does not happen in higher education. In this post, Ben Trachtenberg, an associate professor of law at the University of Missouri, explains why he believes this is a problem.

Trachtenberg has published works in Florida Law Review, Oregon Law Review, Hastings Law Journal, Nebraska Law Review, The New York Times and ABA Journal, among other publications. And he has won several teaching awards. In 2012, he received the Gold Chalk Award for excellence in teaching from the Professional Graduate Council of the University of Missouri. In 2014, he won the Teaching Award of the Rector's Exceptional Junior Faculty, and in 2015, he received the Distinguished Law Faculty Award from Husch Blackwell.

The University of Virginia has observed racial disparities in its student discipline system for decades, but most colleges and universities do not even bother to collect data that will allow them to discover similar problems. Meanwhile, primary and secondary schools grapple with data that show how the implicit bias causes black students to be disciplined in schools much more often than whites, colleges and universities refuse to examine biases on their own campuses.

For years, the US Department of Education UU He has compiled and published data showing racial disparities in K-12 student discipline. Higher education institutions, on the other hand, mostly do not maintain (let alone share) data on the demographics of students who fail in university discipline. In a recent article, we documented reasons to believe that university discipline can discriminate, and I suggest that the increasingly stringent application of Title IX (launched for laudable reasons in response to serious and real problems) may exacerbate the problem.

For example, in one study, teachers who received requests for unsolicited advice were much more likely to respond to messages from white students than from students of other races. (The emails were sent by researchers and were identical, apart from the names of fictitious senders, who were given names that agreed with racial stereotypes, such as "Lamar Washington" and "Brad Anderson")

, studies of the K-12 discipline have found greater racial disparities for vague offenses (such as "disrespect") than for clear violations such as smoking. One theory is that when teachers use subjective judgments to decide whether a student's lack of respect deserves punishment, the implicit racial bias affects the results. Even if most or all teachers treat everyone fairly, unconscious attitudes towards students of different races lead to more black students with suspensions.

In the university context, we have some offenses that are clear, such as serving alcohol to underage students. And we have others that are less clearly defined, such as sexual harassment. Defining harassment is complicated enough in the workplace. On a college campus, where one can not easily separate one's "job" from one's "home," it seems quite likely that unconscious biases will affect students denounced for bullying.

Keep in mind that the racial disparities observed at the University of Virginia are related to your Honor System, not the Title IX process. In other words, even for academic dishonesty, which in many cases is fairly easy to diagnose, UVA finds that black students (and international students) face disproportionate charges. When we inject the racialized attitudes of the United States towards sex and dating in the mix, it may turn out to be even more disparity.

I'm not just worried about racial prejudice in campus discipline. Students who allege racial discrimination in their own college punishments have filed lawsuits against Amherst College, the University of Pennsylvania and other schools. Universities may eventually reveal when they discover the statistics they have so far kept hidden (or not collected).

Of course, maybe I'm wrong, and the data will show that college students of all races face institutional discipline at similar rates. That would be excellent news. For now, however, universities seem to believe that by not collecting data, they can avoid the calculation of a possible racial injustice.

In other areas, universities are making real efforts to confront racial bias. For example, when I served on the committee that examined the candidates for the recent college search of my university, the committee members attended a presentation on how racial and gender bias can affect evaluations of possible hiring. Student orientation at Mizzou includes information on cultural competence and the value of meeting students from different backgrounds. And universities are constantly working to recruit classes with various members.

University professors have carried out important research on racial bias in the K-12 school discipline. It's time for us to consider if we have problems even closer to home.