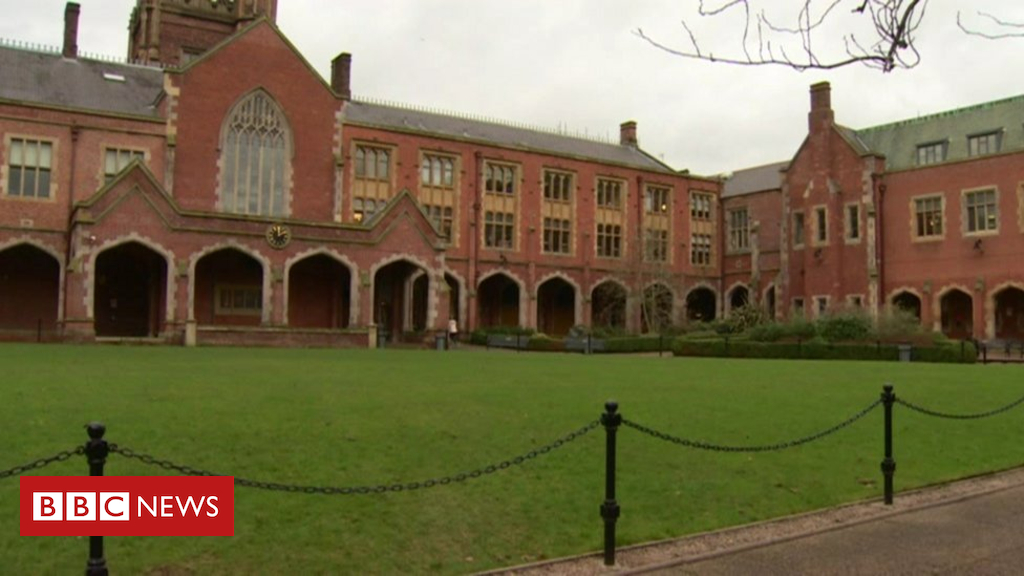 Queen's University has a "toxic" management culture, suggests a survey

A "toxic management culture" at Queen's University, Belfast, has been responsible for the departure of many academics, a survey suggests.

The exit survey of almost 100 former employees was carried out by the University and University Union (UCU) in 2017.

The document has been obtained by BBC News NI.

In a statement, the university said it was committed to promoting and providing a positive and nurturing work environment.

Eighty-five of them completed a detailed survey of their reasons for leaving the QUB, while another 12 provided interviews or written statements.

Almost half of the departing staff that responded belonged to the faculty of arts, humanities and social sciences, while almost a third were engineers and physical sciences.

The vast majority were permanent academic employees with full-time contracts.

A quarter of respondents said they left QUB due to a better offer from another university.

The UCU document said that 90% of respondents "stated that their current working conditions are better than those enjoyed in Queen's".

Among women, the lack of opportunities of promotion and career prospects were cited as the main reasons to leave.

"This confirms the existence of a general problem with the promotion and professional development at Queen's, which is perceived most acutely by women who face additional obstacles to climb the career ladder"

The pressure of the load of work and bad relationships with line managers and senior management were also cited by a number of respondents among their reasons to leave.

"Intimidation is consistently mentioned through qualitative data as lasting, constant and accepted as part of the management culture," the document said.

"The culture of management is widely seen as toxic and punitive, too focused on a reductionist understanding of the university as a business."

After the Results of the survey l This year, it was delivered to senior management and the university senate.

"It could be expected that a significant proportion of employees who leave an institution would criticize their former employers," concludes the document.

"However, not only the comments in the survey are overwhelmingly negative, some issues are recurrent and closely align with the findings of the personnel survey compiled by the Queen administration in April 2016"

"The university, in partnership with its staff, is implementing a comprehensive action plan in response to the priority areas identified in the staff survey," said the spokesperson.

"In addition, a new strategy has been developed. of people and culture Dr. Fabian Schuppert of UCU at Queen's said the results of the exit survey should lead to changes in the university.

"We really need to address the problems so that people really I want to be at Queen's, "he said.

"So they have the feeling that they can do the best research and the best possible work."

"I do not think it's difficult, but it requires a cultural change.