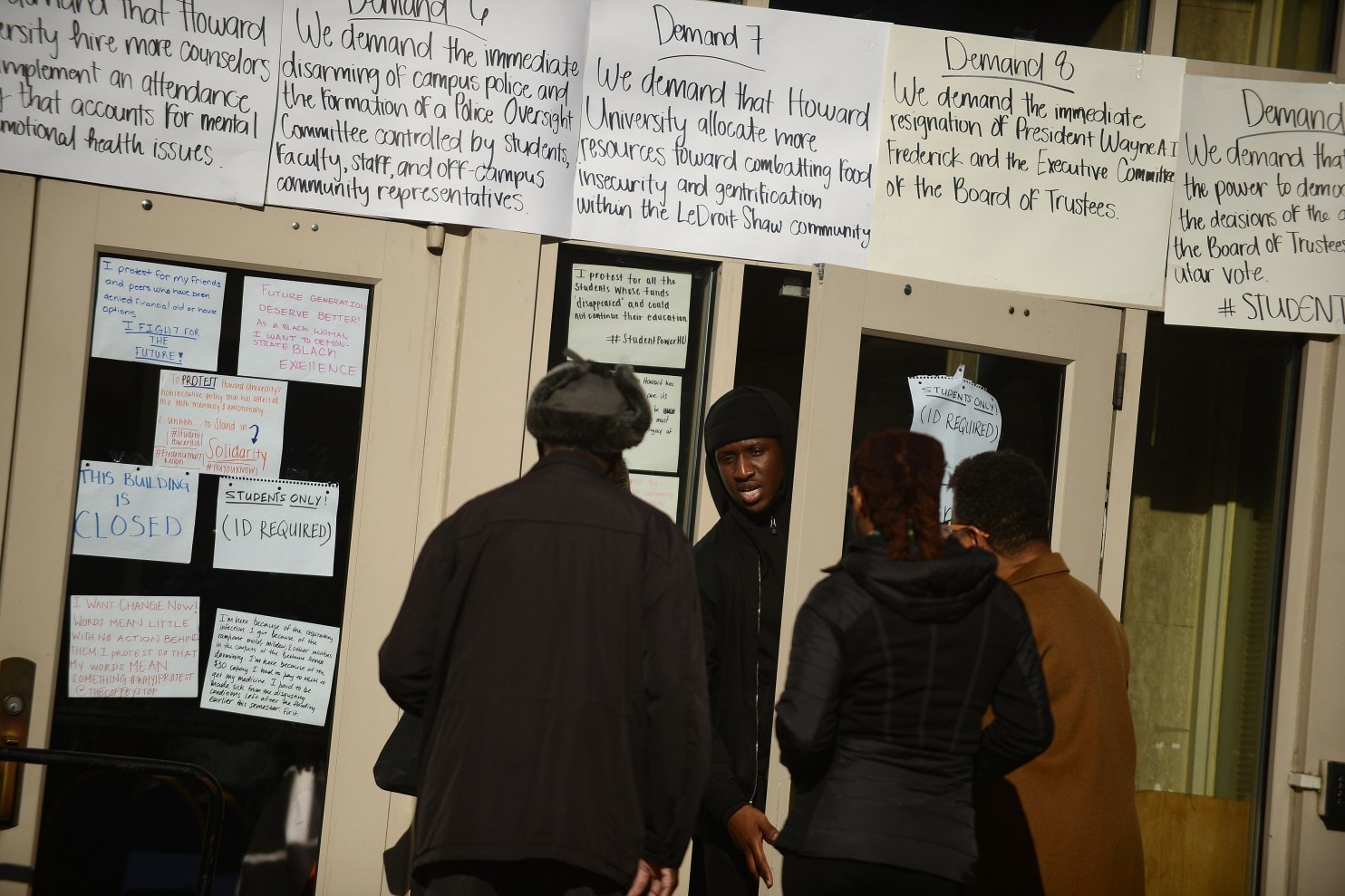 Progress Reported in Conversations to End Occupation at Howard University

The occupation of Howard University students from the school administration building entered its fifth full day on Monday afternoon with a hint that the negotiations were progressing.

"We hope that, now that we have been here for five days, tomorrow we hope it will be the final negotiation session," said Maya McCollum, a Howard freshman with HU Resist, the student group that has organized the protest. McCollum said the students feel confident that they will be able to meet their demands.

Although students expect the occupation to end on Tuesday, McCollum said they are willing to wait. "They are aware that there must be a commitment for everyone to continue going to school and enjoying their university life," said McCollum.

On Monday night, HU Resist described in a press release the talks with members of the board of trustees, saying that a session that began on Sunday lasted until Monday. The protesters and the board of directors have held three negotiating sessions, and a fourth is scheduled for Tuesday at noon, the protesters said. Additional claims were discussed with the trustees, although the press release did not describe them.

"We are prepared to occupy the administration building until we are more than satisfied that our demands have been met," the statement said.

Former protesters' demands included the resignation of the school president, Wayne A.I. Frederick, and action on a range of issues, including transparency in college spending, improvements to college housing and facilities, and a review of the school's response to sexual assault.

The turmoil on campus was compounded by the resignation of Howard University College Senate President Richard L. Wright, who said he had "lost the trust, respect and trust of the majority of committed members and activists. of the council. "

In an interview on Monday, Wright said his decision to resign was not related to the protest or the push of some professors who have asked for a vote of distrust in Frederick.

HU Resist has been adamant in meeting its demands before giving up control of "A" building on the northwest campus of the Washington school. Support for the group's action has been widespread among the students, and on Monday 26 faculty members signed a letter of solidarity with the students.

"Important points are raised about administrative and managerial issues that the administration has not adequately addressed," the faculty members wrote. "We applaud your commitment to bring these issues to the fore."

The student acquisition followed the university's disclosure last week that it fired six employees in the wake of an alleged financial aid scam. It was the latest in a series of incidents in the past year that has irritated students, faculty and staff.

[As turmoil continues at Howard University, its president tells students: ‘I am listening to you’]

Although many have asked for Frederick's resignation, Nadia N. Pinto, president of the school's alumni association, said Frederick should remain in office. In an interview, Pinto expressed support for the students and said that their voices should be heard, but rejected the demand that Frederick resign.

"I have had the opportunity to work with President Frederick and see his work at various levels," said Pinto. "I have not seen any university president relate to students and alumni the way he does, and I admire that about him."

In a letter to Howard's community on Sunday, Pinto noted Frederick's presidency achievements, including four consecutive years of faculty raises, the reaccreditation of Howard's law schools and faculties, education and social work, and hiring women to fill five out of 10 dean positions.

On campus, however, there was little support for the administration.

"This is something we've heard about since I was in freshman year," Richards said. "Like when you hear about embezzlement and things with Howard, we've been hearing about it since we were in freshman year."

Richards has not taken part in the protest because she is an employed student and worries about putting herself in a compromising position. The school's problems go beyond the financial aid scandal, he said, and students on campus feel angry and betrayed.

"It's the whole administration," he said. "It's the fact that Howard, they do not care about students as much as they used to."

Dijon Stokes, a sophomore, said he participated in the early stages of the protest, but that other obligations drew him away.

Howard junior, James Harris, 20, said he agreed with some of the demands of HU Resist but not with overthrowing Frederick.

"There are definitely more people involved than just him," Harris said. "He probably did something wrong, but not too bad."

While the protests have attracted national and even international attention on social media and in the news, the classes at Howard have not been interrupted and the employees working at the administration building temporarily moved to other offices, the spokeswoman wrote. from Crystal Brown University in an email. Brown said there are no plans to forcibly evict the students from the building.