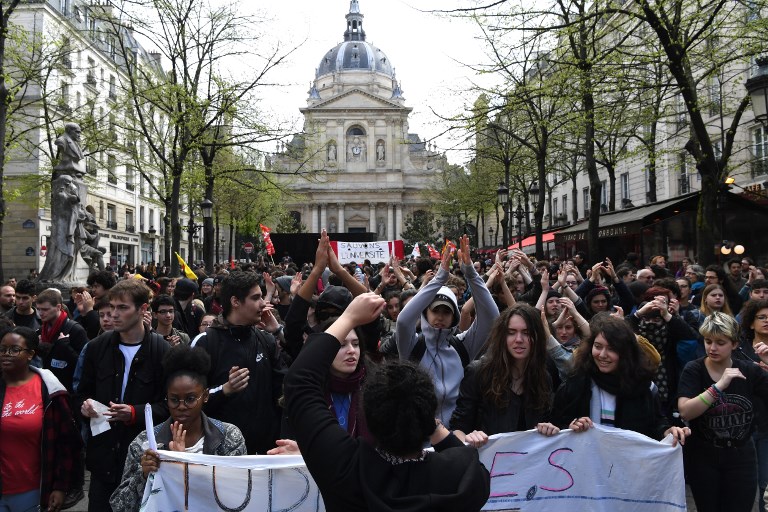 The incident was the latest in a series of protests that have seen students occupy a dozen universities across the country since March for plans to give public universities the power to establish admission criteria and classify applicants.

The protesters at the Sorbonne, which was the center of the mass protests of students and workers who closed France for several weeks in 1968, moved to occupy spaces within the university on Thursday afternoon.

The university authorities said they negotiated with them for about three hours to try to get them to leave, but when the talks failed, they asked that they be sent to the police shortly before 10 p.m. M.

"The evacuation … was calm and uneventful," according to a statement from the Paris police

Later, Sorbone said the university would close on Friday and Saturday for "security reasons."

Riot police were also sent Thursday evening to the University of Paris-Tolbiac, which had been occupied since March, but then left without eliminating the students, who, like their colleagues across the country, see the reform as a violation of the law. French principle of free education for all.

President Emmanuel Macron said on Thursday that in many of the occupied universities, the occupants were not "students but professional agitators, professionals of the disorder"

He insisted that the reform would be carried out, and also said that ongoing protests by train workers, hospital staff, retirees, lawyers and magistrates would not prevent him from reforming the nation's economy.

Currently, students who pass the high school exit exam can enroll in any college course, regardless of how well they have obtained that exam.

The government says that this results in overcrowding at universities and is one of the main reasons why 60 percent of students do not complete their studies within four years.

The situation reached a crisis point last year, and universities used a lottery system to share places in dozens of over-enrolled courses, causing disappointment to thousands.

Now, public universities will have access to students' school records to help them select those whose "motivation" and "aptitudes" best match the course offered.