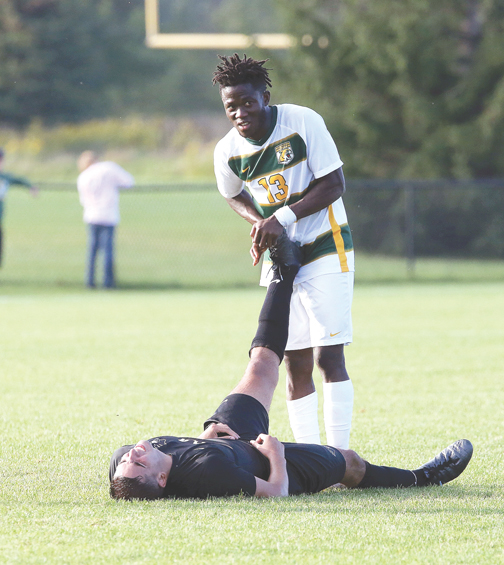 MARQUETTE – The Northern Michigan University men's soccer team may not be playing at their usual time of year, but being inside the Upper Dome prevents a typical spring from the Upper Peninsula, which is slowly breaking up, affects it greatly.

After losing their first two games, the Wildcats won two in a row, defeating Ashland in the dome two weeks ago and knocking out Purdue Northwest on the road Sunday. NMU had to fight furious gusts of wind to end the Pride, which impressed head coach David Poggi.

"Well, firstly, it was quite an interesting match," said . “The weather conditions, you can tell why there are wind turbines all over Indiana because they get a lot of wind from the Windy City.

“The wind was coming from the northwest and it was probably about 30 miles per hour, which doesn't seem like much here in the U.P., but it was a real factor in the game.

“So it feels good, it feels good to get tested in different ways. We were definitely tested and to achieve it basically just by pushing ourselves defensively, I think it was motivating for the team. "

Poggi also praised goalie Alex Weaver, who made three saves to preserve the shutout and has played quite well since transferring from Highline Community College.

"He's played every minute of every game," said Poggi. "He's a transferring junior. I was expecting that from him when I recruited him and he's complying. As some of the other coaches have already mentioned, having that extra time to work with him so he can transition from the club he was with before. at the junior college level to the way we try to play is usually a long transition period, usually maybe half a season.

"And he has accepted everything that we are doing and I I was very happy for him. "

After scoring two victories, Poggi likes where his team is and how it has evolved from young to organized.

“And with a young team, there is a learning curve, but there is also a sense of enthusiasm. I think we are there. We are in that sense of excitement right now. When you enter for the first time, you don't want to say anything to anyone as a player and you just want to be accepted.

The Wildcats head to Upper Iowa at noon EDT on Saturday before returning home to face Northwood on Sunday, April 11.