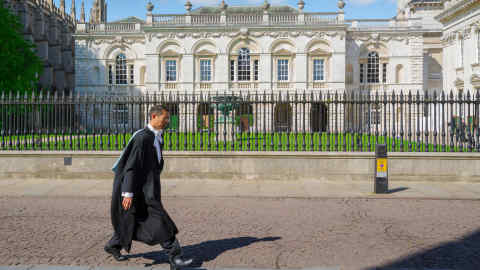 A New Zealand university dismissed complaints against one of its China experts after ordering a controversial internal review that raised international concerns about the academic freedom and Chinese influence.

Staff submitted four complaints to the University of Canterbury and students from rival institutions about a report co-authored by Anne-Marie Brady, which highlighted links between New Zealand universities and Chinese military institutions.

The complainants challenged certain "statements and inferences" in the report entitled "Holding a Pen in One Hand, Holding a Gun in the Other", which was part of a parliamentary communication highlighting concerns about the influence of the Chinese Communist Party in New Zealand.

The University of Canterbury's decision to review Professor Brady's work, rather than asking the complainants to publish their concerns in an academic article of their own, sparked a worldwide outcry. More than 120 scholars from China published an open letter in October asking the university to apologize to Professor Brady and criticizing his decision to institute a review.

The University of Canterbury said on Friday that the review concluded that Professor Brady and her co-authors were complying with the responsibilities of the university's policy and procedures, as well as New Zealand Education Law.

"The committee noted that Professor Brady's work was based on a long period of research and cited extensively from other sources," the university said.

"The University of Canterbury affirms its support for 'the freedom of academic staff and students, within the law, to question and test received wisdom, propose new ideas and express controversial or unpopular opinions.' "

However, the University of Canterbury said that since the report was intended for parliamentary presentation and was succinct, they recommended that some sentences could be amended to provide clarity.

Professor Brady welcomed the end of the review process, noting that neither her attorneys nor herself could see anything to justify the complaints or the gag order.

"The staff and students of the complainant institutions, the universities of Victoria and Auckland, have as much at stake as I do in knowing that their vice chancellors will also defend academic freedom," he said. "They asked UC to suppress my academic freedom against a parliamentary presentation."

One of the complaints was brought by Jennifer Dixon, Deputy Vice Chancellor of the University of Auckland, who made several "claims and inferences" about one of the academics mentioned in the report: Wei Gao, professor of science at the materials. and engineering – they were inaccurate.

Ms. Dixon oversees the Confucius Institute in Auckland and chairs the Advisory Board of the Peking University Center for New Zealand.

Richard McGregor, an analyst at the Lowy Institute, said the University of Canterbury's decision was good news, as Professor Brady had much to contribute to the China debate in New Zealand and elsewhere.

New Zealand, a member of the Five Eyes intelligence sharing network with the US, UK, Canada and Australia, has been criticized by security analysts and experts in China for failing to acknowledge that individuals and organizations with ties to the communist party have tried to influence national politics and society.

Peter Mattis, a former CIA analyst, told a US Congressional committee that New Zealand's participation in the Five Eyes should be reconsidered due to its close ties to Beijing.