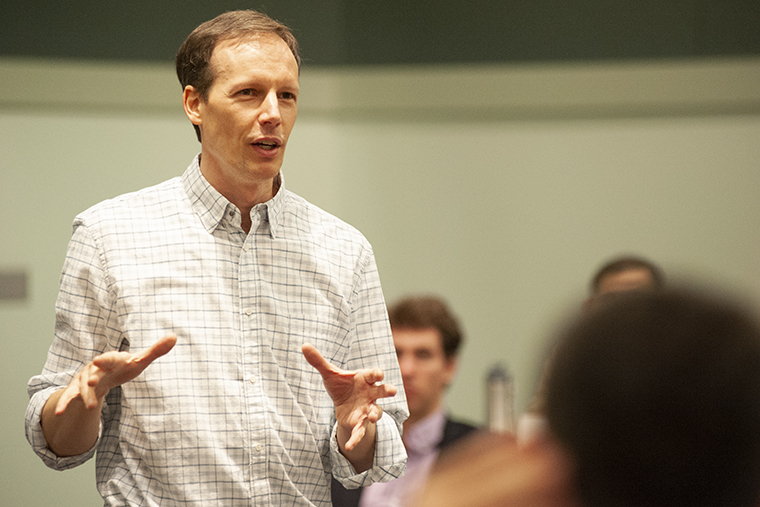 Following its solid trajectory like leader in investigation and innovation, the school of engineering of the University of Washington in St. Louis is taking a great step forward and reaffirming its commitment to face the great challenges engineering world with renewed vigor, an ambitious strategic vision. , and a new name.

"McKelvey's name has become synonymous with innovation and entrepreneurship in the St. Louis region and beyond," said Chancellor Mark S. Wrighton. "There is no better way to make a statement about what our engineering school represents than by giving it a name that represents being in front of the curve and opening a path of creative problem solving through technology."

" This is a historic milestone for the university and comes at a perfect time: when we are intensifying our efforts to promote innovation and entrepreneurship, we unite science with technology in all fields, from information technology to biomedical engineering, and we attack global challenges such as energy and the environment. We are tremendously grateful to Jim for this investment, which extends the important contributions that the McKelvey family has made to this institution. "

The commitment will be used to fund scholarships and chairs, as well as the dean's highest priorities for promote school and its impact on the lives and communities of St. Louis and around the world, In particular, the commitment will allow the school to create educational and research programs that integrate information technology with the humanities, social sciences, arts and other disciplines, and will support the school's effort to improve the region's innovation and business ecosystem.In addition to the important support for the facilities, previous McKelvey Jr. grants include scholarships and general support for the engineering school.

"Under the strong leadership of Dean Aaron Bobick, the engineering school is positioned for true greatness, and This is the right time to take a step forward with this investment, "said McKelvey Jr." Engineering fields are moving at an exponential growth rate, and to stay up to date requires a great investment of resources: human, physical and financial. "

"This is a great day for the School of Engineering and for the university," said Chancellor-elect Andrew D. Martin. "We are embarking on a new era that is based on momentum and energy under the leadership of Dean Bobick. We will unleash the tremendous potential of our smart and talented students and teachers, and see where their talents will take us to the new world of technology and innovation. Thanks to the unwavering generosity and support of the entire McKelvey family, the possibilities are endless. We are deeply grateful. "

Family of McKelvey Jr. – including his wife, Anna, his father, James McKelvey Sr., former student and former iconic dean of the engineering school, his late mother, Edith McKelvey and his stepmother, student Judith McKelvey, MD – has a long legacy of dedication to the University of Washington. "We are a family from the University of Washington as a whole," said McKelvey Jr. "This university has meant a lot to us, and it is a privilege for me to continue to play our role in providing for the future of the engineering school. "

" We are extremely grateful to Jim Jr. and his family for their incredible story of generosity with the engineering school. . Particularly now, while we are prepared to truly transform our approach to research, innovation and learning, this new commitment will allow us to advance the McKelvey School of Engineering to the next level of the best engineering programs in this country and in the world, "said Bobick, who is also Professor James M. McKelvey.

" This tremendous gift creates new opportunities for our students and teachers to face the world's greatest engineering challenges and dramatically expand computing. throughout the university. At the same time, it helps ensure that a diverse population of students has access to world-class engineering education, and allows the school to be a catalyst for the economic development of the St. Louis region and beyond. "

Founded in 1857, the engineering school of the University of Washington promotes independent research and education with an emphasis on scientific excellence, innovation and collaboration without limits.With the best research programs in biomedical engineering, environmental engineering and computer science, the school attracts many of the best students from around the world to its 40 different degree programs.

The school recently launched several new graduate programs, including an interdisciplinary doctoral program in image sciences, one of two programs of its kind in the United States, an innovative Ph.D. It combines data science with social work, political science and psychological and brain science; and a new master's program in cybersecurity engineering. The new undergraduate programs include environmental engineering, a joint degree in business and computer science, and a joint degree in mathematics and computer science.

McKelvey Hall was made possible thanks to a $ 15 million commitment from McKelvey Jr. in 2016 to honor his father who, during his 27 years as dean, transformed the engineering school of a regional program into a nationally prominent research institution .

McKelvey greatly strengthened the quality of the undergraduate and postgraduate curricula, particularly in emerging fields, including computer science; Significantly increased enrollment of undergraduate and graduate students; expanded the faculty; spectacular increase of federal funds and other funds for research; and increased the endowment for the school more than ten times, from $ 4 million to almost $ 52 million. He also oversaw a remarkable expansion of the school's footprint at the Danforth Campus.

Jim McKelvey Jr. is a successful serial entrepreneur and co-founder of Square, a revolutionary financial services and mobile payments company accredited with empowering companies of all sizes throughout the world.

McKelvey Jr. is an independent director of the St. Louis Federal Reserve, but is best known for his involvement in several new St. Louis-based businesses, including Six Thirty (co-founder), LaunchCode (founder), Third Degree Glass Factory (co-founder), Mira Publishing (founded when he was a student at the University of Washington) and Square, the company he founded in 2009 with Jack Dorsey. He is also the author of "The Art of Fire: Beginning Glassblowing", the main textbook for beginners.

As a child, McKelvey Jr. spent some formative time at engineering school with his father during his tenure as dean. He applied the early decision to the University of Washington and enrolled in 1983, graduating in 1987 with degrees in economics and computer science. While a student, McKelvey Jr. wrote two computer programming textbooks.

In 2012, the engineering school presented McKelvey Jr. with his Alumni Achievement Award to recognize his innovative business initiative. In 2017, the university recognized him with the Robert S. Brookings Award, which honors individuals for their extraordinary dedication and generosity to the University of Washington. In addition to currently serving as an administrator of the university, he has also been a member of the Board of Alumni Governors.