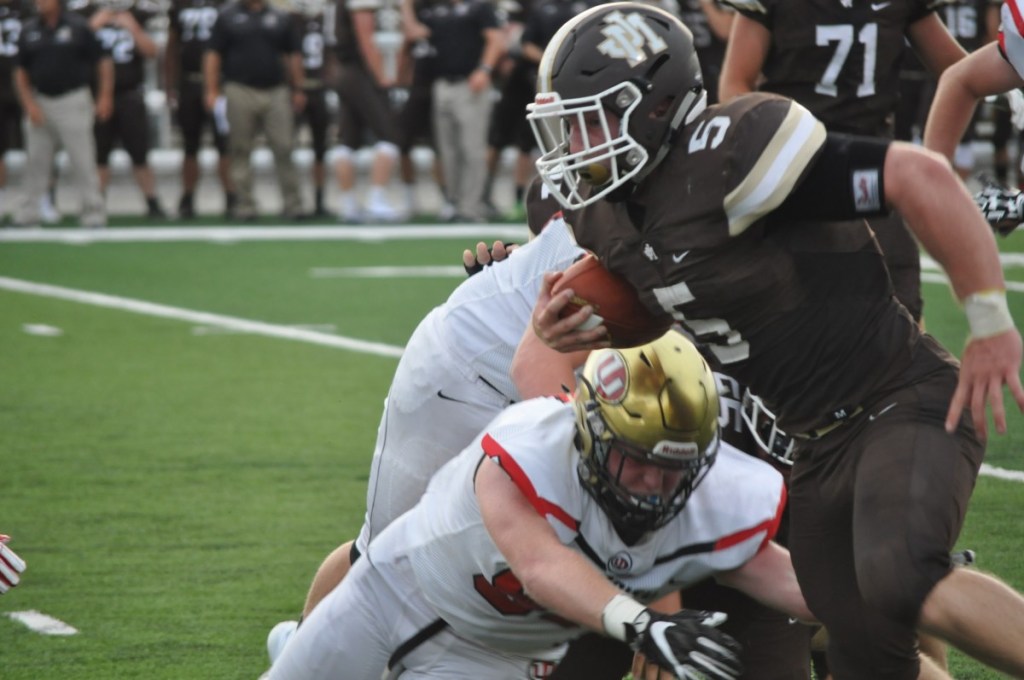 GLEN DALE – Prior to Friday's season opener at John Marshall, veteran John Kelley University coach was concerned about how the defensive front of his team would resist the physical and experienced offensive line of the Monarchs.

It was easy to see why through the exciting 35-28 victory of John Marshall against the Class 5 No. 5 Hawks, as the Monarchs consistently got what they needed on the ground to take a Week 1 victory in their new field of grass.

"Our running style is the same, we're going to run in the middle, right on each play until you're tired and do not want to go out anymore," said John Marshall's runner Charles McCool, who ran for three touchdowns and caught another. "We keep hitting you until you do not want to play." That is our style of attack. "

Leading 28-21 at the end of the third quarter, John Marshall forced a UHS rotation on downs to retrieve the ball on his own 34-yard line.

A series of 13 plays was made to cover the 66 yards needed, with the Monarchs running on each play, including McCool's 21-yard run to the end zone that put them up for two touchdowns with 7:34 remaining.

In the deciding series, JM converted separate quarter and 1 pieces and finished with McCool's fourth touchdown of the night.

The University responded with a quick 63-yard run and cut its deficit in half on a 9-yard pass from Logan Holgorsen to Amir Richardson with 6:31 up.

JM recovered his own 40 and used 11 plays to get to the UHS 5 yard, and most importantly, it took almost 5 minutes off the clock.

Faced with the fourth down, the Monarchs lined up to go for it, before a false start moved them back to 10. Then they chose to try a field goal, but it was blocked, which kept hope alive for the Hawks. , who took more in their own 20 with 1:31 remaining.

UHS won only 2 yards on the following four plays, returning the ball to JM and initiating a celebration on the Monarchs' sideline by sealing a win against a program that completed the 2017 undefeated regular season.

"We had 11 in the box and they still pushed us down on the field," Kelley said. "But I give my kids a lot of credit, they battled, they never gave up and they thought they could win, and that blocked field goal gave us a chance."

"But they were not going to give us anything there, except under things." They weathered us. People say, 'Oh, your team is not in shape.' That is not true. Your boys just weathered us and beat us. That's good, old-fashioned football. "

The Hawks achieved their best defensive game of the night in the first series of the Monarchs, when Evan Parow intercepted a pass from Jordan Wood in the territory of UHS.

Parow's return placed the Hawks in JM territory to begin their second series, but a groping transfer into the 10-yard line ended up in the hands of Bradlee Clark, giving the Monarchs the ball on their own 12.

John Marshall (1-0) responded to the momentum change by putting together an 88-yard game of 12 plays that was topped by a 25-yard TD run by McCool. The drive, which consisted of all career plays, allowed the Monarchs to tie the game at 7 with 10:20 to play in the first half.

"We went up 14-0, I think the seed of doubt is planted and whatever it is, if we could have obtained two scores in front of them, then their ground game plays in our favor, because they are taking their free time," he said. Kelley. "We can not leave the field, they were harder than us and more physical than we were, they got behind their big linemen and pushed us across the field with their big, strong backs."

Holgorsen connected with Parow for a 36-yard pass just past the midpoint of the second quarter, before the duo reconnected on the next play for an 8-yard TD pass that put the Hawks ahead, 14- 7.

But JM responded to tie the game in McCool's 1-yard run with 25 seconds remaining in half. That score would not have been possible without the Monarchs getting an 18-yard run from McCool in a fourth and 10 plays in the '37 Hawks.

JM started the second half with the ball and went 68 yards on eight plays to take his first lead of the game in Wood's 1-yard touchdown run at the 8:42 mark of the third quarter. The key plays of that drive included passes of 45 and 22 yards from Wood to Justin Frohnapfel, with the latter presenting a juggling catch in the fourth and 13 that moved the ball to UHS 1.

The Hawks responded with an impressive 64-yard thrust to score the game at 21, with Holgorsen throwing a 23-yard touchdown pass to Parow at the 7:05 mark of the third quarter.

After seven consecutive races to start the next Monarchs series, Wood found McCool for a 52-yard touchdown pass that allowed JM to maintain a 28-21 lead with 3:54 left in the third.

The Monarchs finished with 323 yards on the ground, led by McCool's 91-yard effort.