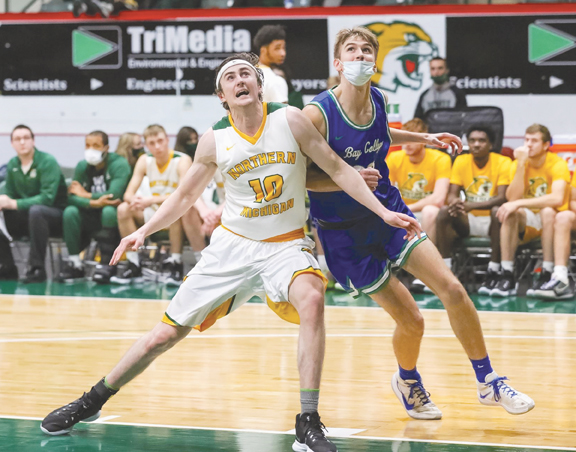 Northern Michigan University's John Kerr, left, faces a defender as they seek a rebound during an exhibition game against Bay College played at the Berry Events Center in Marquette on 28 October (Photo courtesy of NMU)

MIDLAND – Max Bjorklund scored a trio of 3s and scored 19 points, but it was not enough for the University men's basketball team Northern Michigan avoids a loss in their first GLIAC game, 81-72 at Northwood on Thursday night.

Bjorklund was 3 of 5 on 3s while leading the Wildcats (3-4) in scoring, as he also dished out four assists, had two steals, had four rebounds and even blocked one shot.

After NMU's Ben Wolf scored the game's opening points with a layup in 44 seconds,

Bjorklund tied the score 16-16 with 9:36 remaining in the first half on a jump shot before the T’wolves went 8-0 for the next three minutes.

Trailing 35-25 at halftime, Northern cut their deficit to four points at 37-33 just over three minutes in the second half on a layup from Bjorklund.

But a 7-0 Northwood run moved the lead back to double digits.

The closest NMU came after that was six points, the first time at 75-69 with 1:05 to go on a Sam Schultz jump.

The game is scheduled to air on WLUC-TV6 or Fox-U.P. and broadcast by radio station WUPT 100.3 FM The Point.