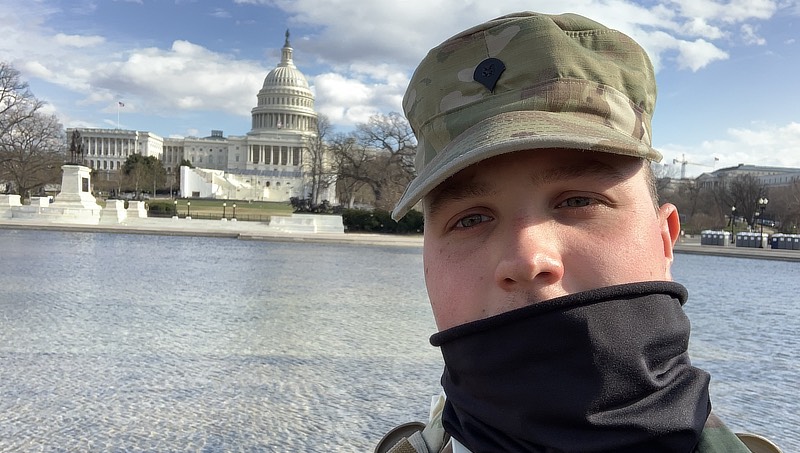 Major of National Security serves in Washington during the inauguration

By Renee Chmiel, Office of Marketing and Communications

Brian Nalezynski'21 joined the Connecticut Army National Guard as a freshman at the University of New Haven. His service has taken him to Cuba and, more recently, to Washington, D.C., for the inauguration of President Joe Biden.

Nalezynski was among the more than 25,000 National Guard members who served in Washington, along with many other law enforcement agencies, ensuring the safety of all attendees at the inauguration. Serving at a checkpoint near the National Mall, he worked with various agencies, including the Secret Service, the United States Marshals, and the Transportation Security Administration (TSA), verifying the credentials of anyone attempting to access the checkpoint. .

"My role in the recent inauguration was historic," he said. “Being part of such a historic moment meant a lot to me. This event will be commented on and included in the history books for years to come, and being a part of that was incredible. ”

"I believe that my mission in life is to save lives"

Nalezynski attended basic and advanced training shortly after starting his second semester at the University. Since then, he has been posted to Guantanamo Bay in Cuba, where he served for nearly a year and, last year, supported Connecticut during the first months of the global coronavirus pandemic. He continued his education part-time while serving each mission. He was called to serve again while preparing for the spring semester, so he headed to Washington.

Nalezynski's professor, Robert Sanders, LP.D., J.D., LLM, mentioned Nalezynski's service in Washington in a recent interview with Wake Up With Cheddar. Nalezynski's service on opening day continued until evening, when he was transferred to the United States Capitol building to carry out security around the perimeter, an especially crucial role after the riots that took place there a few weeks. before.

"I learned a lot from this experience," he said. “In the military we say, 'one team, one fight,' and that's exactly what we did. From guards and female guards across the country, police, Secret Service, TSA, and many more agencies, we all come together collectively to help and protect. ”

A national security student, Nalezynski is now back at the University for the spring semester. If, or more exactly when duty calls, he is ready to serve again.

"I believe my mission in life is to save lives and protect America in any way that I can," he said. "If I can save a single life, my mission will be completed."