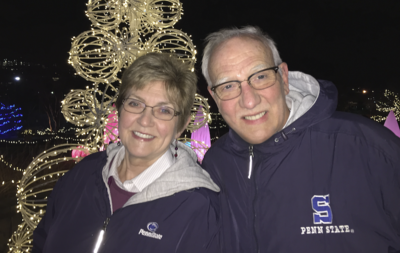 Korners returns through the establishment of scholarships, program funds

As administrators and faculty members of Penn State, Barbara and James Korner have seen first-hand how many students have difficulty paying for a college education . That's why they have established an Open Door Scholarship as part of the University's current fundraising campaign, "A Great Penn State for 21st Century Excellence."

The couple is also committed to supporting the College of Arts and Architecture, WPSU and Shaver's Creek Environmental Center through its heritage.

"As members of the Penn State family for a long time, Barbara and James Korner have been strong supporters of the University, helping it grow and prosper," said Nick Jones, executive vice president and director of the University. "By establishing an Open Door Scholarship for students with financial needs and by supporting a variety of programs throughout the University, the Korners will have a positive impact in the coming years."

Barbara Korner will retire in June 2019 after 12 years as dean of the Faculty of Arts and Architecture. James Korner, who currently serves as the special assistant to the senior vice president of finance and business, will retire in April 2019. James Korner also served as an adjunct instructor at the School of Hotel Management and a deputy vice president in outreach activities and in line. Education

In establishing their scholarship, the couple took advantage of a 2: 1 college combination available through the recently concluded Open Door Scholarship Matching Program, which finally triples the value of their initial investment of $ 30,000 . The Open Door Scholarship of Barbara Oliver Korner and James R. Korner at the College of Arts and Architecture will help college students with a substantial financial need participate in a variety of Penn State programs aimed at helping them stay on track. their titles.

"For both of you, the most rewarding part of working at a university is to see the students grow and prosper. "Very often, students are burdened by extended loans, part-time jobs and other factors that prevent them from making the most of their Penn State experience," said Barbara Korner. "There was no doubt that, in deciding what kind of gifts we would make to Penn State, a scholarship for students with financial needs would be part of our plan. We benefit from the scholarships during our own academic trip, and it has been an honor and a pleasure for us to work with so many talented and creative students. We are grateful to be able to help current and future students complete an education at Penn State. "

Beyond their Open Door fellowship, the Korners have also pledged a donation of assets to benefit areas throughout the country. University, including the establishment of a scholarship for graduates in the Faculty of Arts and Architecture and donations to WPSU and Shaver's Creek Environmental Center.

"I am honored to have served on the WPSU board of representatives, and Jim and I want to continue supporting this incredible community resource, and the station's radio and television programming is unmatched in this region, "said Barbara Korner. "And Shaver's Creek, also part of Penn State Outreach, is another local treasure that Jim enjoyed to pastor in his work and that became something special to us.

During his years at the University, Korner, who are members of Penn State's Circle of Presidents in recognition of their accumulated annual donations, have contributed to scholarships and various cultural outreach programs, including the Palmer Art Museum, Center for Performing Arts, Penn State Center Stage and Penn's Woods Music Festival, among others.

"A Great Penn State for Excellence of the 21st Century" is a focused campaign that seeks to elevate Penn State's position as a leading public university in a world defined by rapid change and global connections With the support of alumni and friends, "A Greater Penn State" seeks to fulfill the three key imperatives of a 21st century public university: maintaining the doors to higher education r open to students who work hard, regardless of financial well-being; creating transformative experiences that go beyond the classroom; and impacting the world by fueling discovery, innovation and entrepreneurship. For more information on "A Greater Penn State for 21st Century Excellence," visit greaterpennstate.psu.edu.