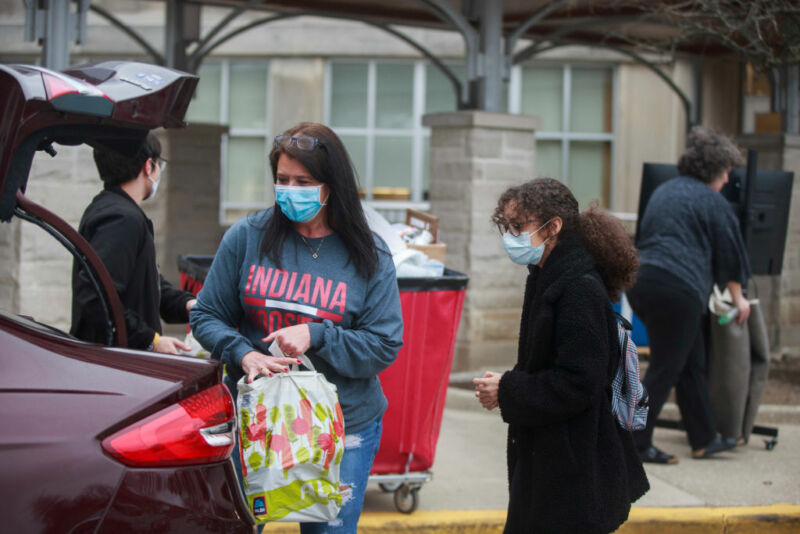 Indiana University wins in suit over his mask, vaccination mandates

On Monday, the Seventh Circuit Court of Appeals ruled in against students seeking a court order that would prevent Indiana University from implementing a vaccine mandate before the start of the fall semester. Both courts relied on a Supreme Court precedent from more than a century ago that declared a much broader vaccine mandate constitutionally acceptable.

We discussed the case with Georgetown law professor Lawrence Gostin, who indicated that this type of decision will not be limited to Indiana; at the national level, vaccine mandates would be acceptable from a constitutional perspective. However, many states have passed laws that outright limit or prohibit vaccine or mask mandates. And these laws would override university policies that federal courts have found to be perfectly reasonable.

Not sending the best

The lawsuit that was settled this week was filed by eight Indiana University students. The university had developed a policy that required vaccinations for all students, but allowed religious and medical exceptions. Those granted the exceptions will be required to wear a mask on campus and have frequent tests for the virus. Failure to comply with these policies will result in the suspension of the student's computer accounts (including e-mail) and the deactivation of campus access cards.

The student complaint indicated that this policy interfered with the privacy of their medical decisions and their right to due process. They requested a preliminary injunction blocking the entry into force of Indiana's policy, a request that requires them to show that they would likely prevail if the case went to trial.

According to their testimony, summarized in a previous court decision, the eight who sued were not exactly the best candidates to challenge a vaccination mandate. Six of them had already been granted a religious exemption, and a seventh apparently qualified for it; most of them objected to masking and testing. However, they all acknowledged that they had previously worn masks when necessary. One "says he has a deep-seated religious objection to wearing a mask and being examined," the court summarized, before noting that he "wore a mask while attending religious services".


Another stated that he was at low risk because "Pescatarians are less likely to suffer from serious diseases." A third "objects to the mask and testing requirements because she thinks masks are silly and claims that nasal swabs cause cancer."

However, the court took their claims seriously and evaluated them in accordance with the relevant legal standards. Specifically, it considered the precedent set by Jacobson v. Massachusetts which upheld a state's mandatory vaccine law, passed during a smallpox outbreak in the early 1900s.

While the lawsuit seeks to limit Jacobson to the circumstances in which it was decided, the Supreme Court has used it as precedent several times since then, and all 50 states now They have laws that require students to be vaccinated against specific diseases. As the data currently stands, the court determined that "Indiana University has a rational basis to conclude that the COVID-19 vaccine is safe and effective for its students." Since his policy has a rational basis, the precedent Jacobson applies.

Similarly, the court found that "Indiana University has a legitimate interest in promoting the health and safety of its students. And masks and tests are rationally related to the achievement of those measures."

The decision did not surprise Gostin of Georgetown. "There is wide discretion on the part of companies, the university and employers [and] to demand conditions to go to work or to the classroom," he told Ars. "Universities have been demanding vaccines for a long time. Hospitals have done it, companies have done it, [and] the federal government has now done it for their employees."

Both the original decision and the Court of Appeals decision noted that Indiana University policy was substantially more flexible than the law at issue in Jacobson which required vaccinations for all adults. Instead, the students were given a choice between three options: shots, masking and testing, or taking a few semesters off. But Gostin said these additional options are not necessary for a policy to withstand constitutional scrutiny, and pointed to a case where a hospital vaccination mandate was upheld in Texas.


While a trial of the Indiana case could still reveal details of the policy causing constitutional boundaries to be violated, the decisions thus far suggest that the case is unlikely to result in a ruling against the University. Indiana.

For those states where these kinds of policies go into effect, Gostin said the policies are likely to push for additional vaccinations in students, who are part of an age group that lags behind their biggest in terms of vaccination rates. "There is very good evidence from behavioral science that soft mandates, where you give them options, or hard mandates, where you exclude them from campus," he told Ars. "Both are very effective in obtaining high vaccination rates."

But in many states, attempts to establish policies like this go against legislation and / or executive orders at the governor level that block mandates for vaccines, use of masks, and / or other public health measures. And here, the news is less good for public health. "[The states] can probably do it legally, because states have quite a wide discretion to regulate business and the private sector within their states," Gostin said. Consequently, it would be possible to enact a law in Indiana that would prevent the university from implementing its policy.

A case that could determine whether Gostin is correct is currently happening in Florida, where a cruise line is suing the state because it does not allow the use of vaccine passports. However, since the parties are still arguing over whether Florida is the right place for the case, it may take some time to resolve it.

Meanwhile, there are signs that the latest surge in infections is prompting some states to rethink. On Tuesday, the Republican governor of Arkansas said he regretted passing a law banning mask mandates and is trying to get the legislature to allow schools to require the wearing of masks. According to Gostin, this should be the case: "Most of these state laws are, in my opinion, irrational, because state governors and legislatures are supposed to act for the health and safety of the population, and these laws are doing exactly otherwise. "