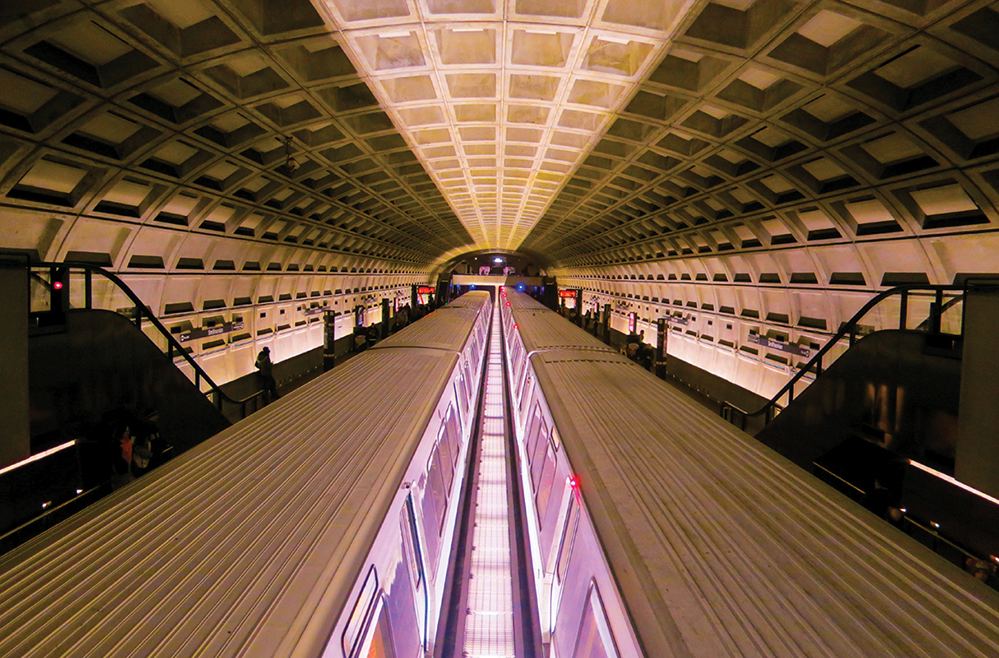 GUSA advocates that the university establish the Metro Pass program; Students will vote in referendum

Students are pushing for Georgetown University to establish a subway pass program, which would allow students to ride public transportation in Washington, D.C. at a discounted price.

The Georgetown University Student Association published a referendum asking the university to adopt a College Pass program, which provides access to the services of the Washington Metropolitan Area Transportation Authority to students from participating colleges and universities. American University is currently the only institution of higher education in DC to offer the U-Pass program to its students; other participants are universities outside the District with satellite campuses.

The Georgetown campus is separate from downtown DC, making students feel separate from the rest of the district, according to GUSA Senator Lara Santana (SFS '24).

“I'm a freshman, so I went through the whole thing where they introduce you to the whole university, they try to make you fall in love, so you decide to get engaged. The center is not as accessible as it could be, ”Santana said in a Zoom interview with The Hoya. “Obviously, there is Georgetown transportation, but it only goes to a certain point and to specific places. So it really makes traveling difficult, especially when there are all these internship opportunities. Even if you wanted to enjoy the D.C. landscape, which is something they generally advocate for, it's not that readily available to students. ”

Under the program, each full-time student would have access to unlimited rides on Metrobus and Metrorail services throughout the semester. In the first year after WMATA began offering the program to DC universities in 2018, American University students used a total of 1.5 million Metro trips, giving students more travel options. profitable for internships, jobs and personal activities.

The GUSA Senate voted unanimously on April 11 to implement a U-Pass program for students on the main Georgetown campus. The undergraduate student body will be able to vote in this referendum during the GUSA Senate elections, according to Senator Leo Rassieur (COL'22), who first presented the referendum to the Senate.

Similar to the AU program, GUSA proposes that the cost of the U-Pass would automatically be included in the student's tuition, which amounts to approximately $ 136 per semester. Students receiving financial aid would have a reduced or eliminated fee, depending on the student's eligibility for financial aid, as per the referendum.

GUSA hopes to emphasize to the student body that students with financial aid will have no additional cost if the referendum is adopted, according to Rassieur.

"Because the cost is included in tuition, any student currently receiving financial aid will also benefit from that financial aid from this program," Rassieur said in a Zoom interview with The Hoya. “The idea is to help low-income students. That's where the impetus behind this project comes from. Therefore, we would not be doing this if we thought that this would put a burden on low-income students who have to pay a part or a portion of this fee. "

Despite financial aid, the referendum The current law does not allow students to opt out, which may be a top administration concern if students vote to implement the program, according to Senator Rowlie Flores (COL '22), who co-sponsored the referendum.

"About half of the students qualify for financial aid and the other half do not, so there will be a huge disparity," Flores said in a Zoom interview with The Hoya. "So there could be a bit of tension between students who receive financial aid and those who do not. So maybe an opt-out option is something Georgetown needs. ”

While the university has not offered a U-Pass program in the past because it would require an increase in tuition, is working with students to explore the option of implementing one, according to a university spokesperson.

“We are always looking for creative ways to provide our students with transportation options while protecting against increases in the cost of attendance, ”the spokesperson wrote in an email to The Hoya. "We continue to explore new opportunities to connect our university community with the city through free or low-cost modes of transportation."

If approved, GUSA projects that the U-Pass program would officially begin for the 2022-23 academic school year. Full implementation would follow a trial period during the 2021-22 academic year, allowing selected students to test the program. The data collected by the university from this trial period will be used to measure student interest in the U-Passes, according to Flores.

"Other officers may have different opinions on this, so if this passes, this is my idea that it would lead to college: that the probationary period is more like you can decide if you want to participate in the program for at least one semester." Flores said. "In my opinion, it should be the same logistics that we have in the referendum, but the only difference is that the students can decide if they want to try it."

GUSA has not yet contacted WMATA directly to implement this program in Georgetown and will not communicate until both the student body and administration officially approve the program, according to Flores.

The push for a subway pass program is not entirely new to Georgetown, but an effort to gauge student support for the initiative will bolster advocacy efforts, according to Rassieur.

“When we talk to administrators about any kind of big project, their question is, 'How do you know that students really want this? How do you know that it's not just you or a small vocal minority? "Said Rassieur." That's why we need the referendum, because it completely dispels the myth that this is just a handful of people who want this, when in reality it is the majority of the school. "