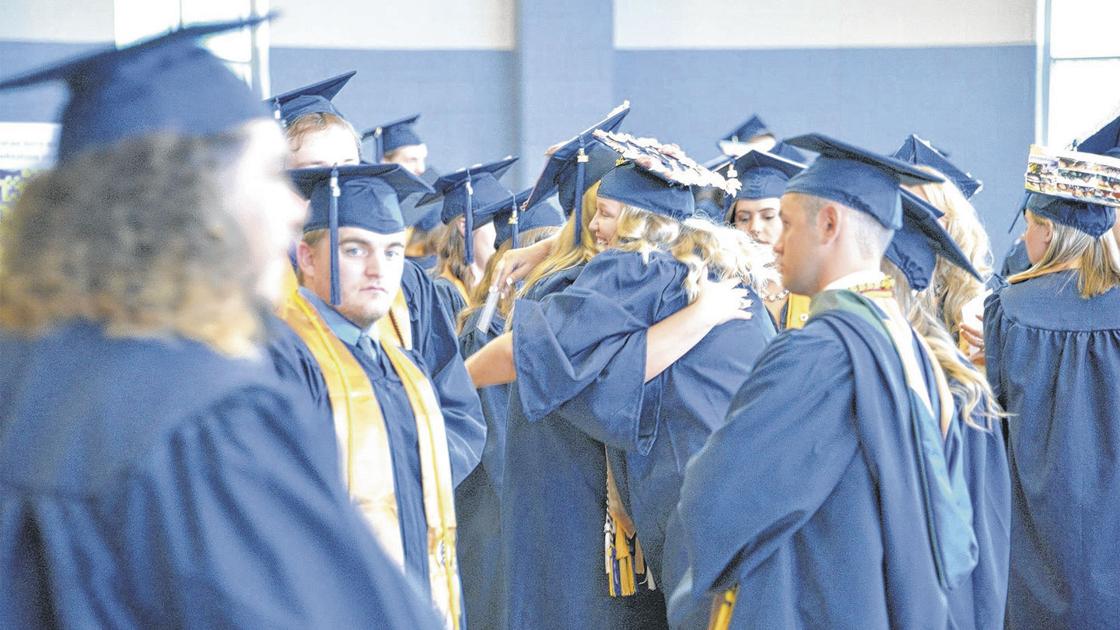 SHEPHERDSTOWN, W.Va. – Bright flashes and a brighter smile filled the Shepherd University Butcher Center on Saturday as students in the 2018 class graduated.

"Be proud of everything you've accomplished and continue to do amazing things," said Kahlen Browning of Bolt, W.Va., to his classmates. "Once a Ram, always a Ram."

Dressed in their traditional dark blue caps and dresses, 641 students received their bachelor's degrees during the 145th undergraduate degree at a university filled with family, friends and teachers.

Paul T. McDermott, a pastor of 1983, provided this year's graduation speech, urging students to work hard, take the risk and remember "it's about you."

"Have confidence, not arrogance, when you walk out that door," said McDermott, president and CEO of the Washington Real Estate Investment Trust. "Through it all, trust and faith will transport you."

McDermott relied on his own life experiences during his comments, saying that his choice as a Shepherd student to pursue a career in real estate was not exactly what his parents had anticipated.

"That was my choice, and now it's your turn," he said.

University President Mary JC Hendrix opened the ceremony and awarded the President's Award to the Friends of Popodicon, a group formed in 2017 to restore the old Popodicon house and garden on campus to its former beauty.

The class had 31 students who were honored as Joseph McMurran Scholars, an honor named by the first president of Shepherd and awarded the best academics of the university.

Before receiving their diplomas, the graduates also heard comments from their classmate and resident of Clear Spring, Hannah Brumbaugh, who urged the class to remember their support system of parents, frien ds and teachers who helped and encouraged them in the path.

"We, as a class, would like to thank our teachers for educating and preparing us … but, above all, we must recognize ourselves," he said. he said.