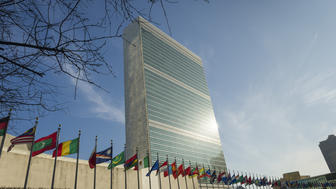 Freedom of the press is a fundamental human need

The United Nations adopted 17 Sustainable Development Goals (SDGs) in 2015, designed to "end poverty, protect the planet and guarantee prosperity for all " These objectives are intended to promote basic human needs and include: zero hunger, quality education and clean water. While the SDGs are apparently complete and direct, the objectives do not include one of the most important and least valued prerequisites for a healthy society: press freedom.

To consider that freedom of the press is as vital as water can seem absurd or melodramatic, as well as contradictory with Maslow's Hierarchy of Needs. However, corruption is often the driving force behind ongoing environmental and socio-economic problems, such as water crises, which pose significant risks to the public well-being. Consequently, unless such corruption is confronted and resolved, people will continue to die at the hands of government abuse and neglect. Corruption needs public exposure before a confrontation can take place, which is not possible without an uncensored medium. Human lives are based on the existence of a free press to survive in these cases.

Food, water and shelter do not exist in a vacuum. Governments have the ability to influence production and access to these essential resources, especially in more authoritarian states. For example, the plundering of resources this year by politicians in South Sudan has resulted in a famine with an increasing number of deaths and thousands. The lack of transparency on behalf of the government of South Sudan was the main reason why these politicians could get away with committing such abuses. These situations highlight how responsibility for the control of essential resources can be as important for the preservation of life as the existence of such resources in the first place. A free press is the key to achieving this responsibility.

This dynamic is already observable in many developed countries. When Donald Trump Jr. posted emails in early July indicating that he had planned a meeting with an attorney related to the Kremlin about "incriminating" information about Hillary Clinton, it was not because of an unwavering commitment to transparency. He did it because the New York Times had communicated before informing him that he was going to publish a story in those emails. Secret meetings may not be as devastating as famines, but the general idea is true: leaders have more difficulty hiding their corruption when the press can function independently of government oversight.

This is not an innovative concept, nor the idea that accountability leads to better governance. However, these considerations suggest that press freedom should not be considered simply as a human right, but as a human need. Research carried out at the University of Missouri suggests that a freer press leads to a higher quality of life and a healthier environment. In addition, countries experience greater economic growth and productivity when they are less corrupt.

These facts can make press freedom seem like a great benefit to society rather than a necessity, but consider what happens in your absence. The United Nations Office on Drugs and Crime (UNODC) estimates that approximately $ 2.6 trillion per year is lost due to corruption. It is foreign aid, direct foreign investment and government revenues, all diverted from public goods into the pockets of fraudulent politicians and bureaucrats, which inevitably harm ordinary people. Look again at South Sudan, where thousands of children are at risk of starvation due to misuse of resources. When this type of corruption goes unreported, or when media coverage is stifled by the government, the problems are left unresolved and more lives are lost. The lives of these people depend on the disclosure of such information, which is where freedom of the press becomes as necessary as the water they drink and the food they eat. The lack of transparency is causing the loss of human lives.

Fortunately, increased Internet access in countries like South Sudan has allowed the press to circumnavigate legal limitations. This is not a solution in itself, since several websites dedicated to exposing corruption are the target of government efforts. For example, the Jamii forums in Tanzania have not been immune from state suppression. The Internet is, on the other hand, an accessory for transparency activists to use while international organizations and NGOs attack the problem at the source, fighting for a freer press. An important part of this battle will be that organizations like the United Nations consider that press freedom is on a par with other basic needs. Humans need clean water to survive, but they also need to know what their leaders do with that clean water to truly preserve the well-being of society.