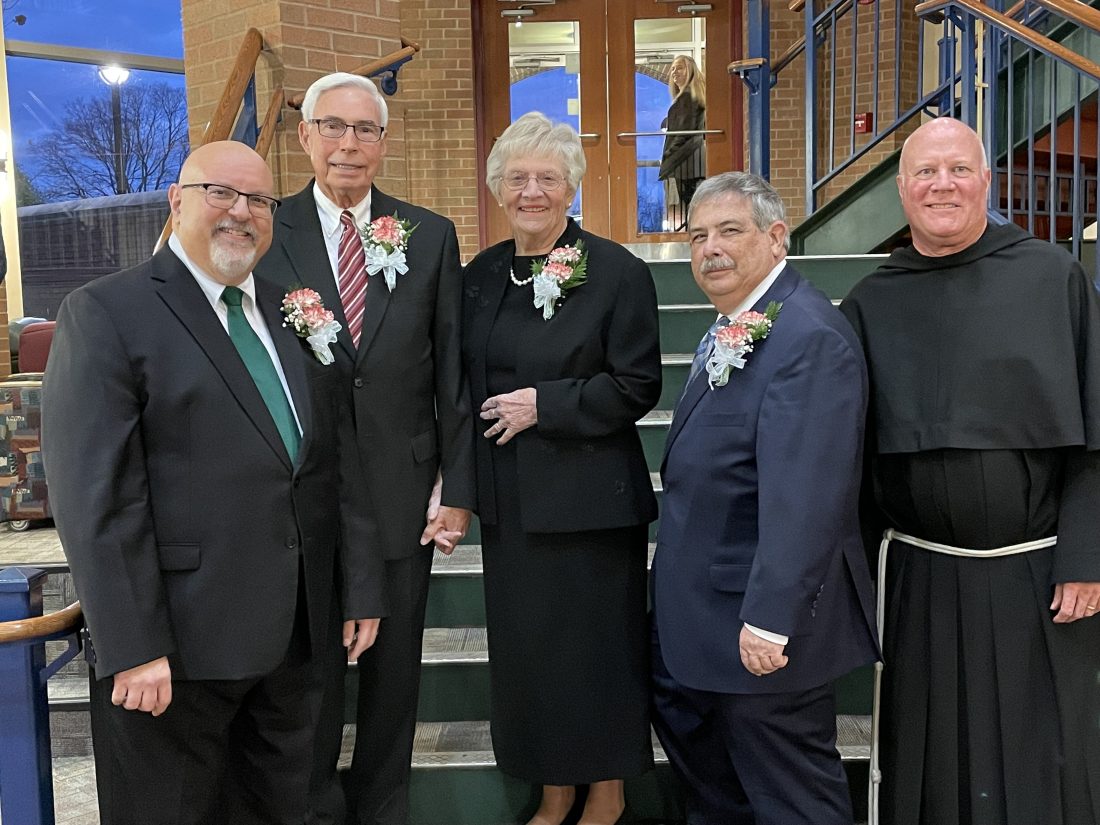 STEUBENVILLE – The Franciscan University of Steubenville celebrated contributions to the school and community on Saturday with the presentation of its Founders Awards for 2021.

The award, established in 1978 in memory of Bishop John King Musio, the first bishop of the Diocese of Steubenville, is a highlight of the college's Founders Association annual dinner.

After graduating from Franciscan University, John Irvin enrolled at West Virginia University School of Dentistry. He graduated in 1962, then spent two years in the US Army Dental Corps before establishing his practice in Wintersville, retiring in 2019 after 55 years.

Over the years, Irvin, his wife, and children Beth, Jack, David, Patricia, and Chris had close ties to the university: John served on the board of trustees from 1977 to 1989 and received an honorary doctorate in 1989; Judy Irvin had volunteered in the Conference Office and was treasurer of the Academy of Lifelong Learning, an affiliated university that provided ongoing classes for seniors. Over the years, the couple organized meals for all the principals at Franciscan University of Steubenville since John became a dentist.

Continuing the tradition: Daughter Beth (Irvin) Matanzo works as a secretary in the Graduate Nursing Department. His son-in-law, Dr. Thomas Matanzo, DDS '81; his sons, Dr. Jack Irvin, DDS '84 and Chris Irvin '90; and his daughters-in-law Janet (Lynch) Irvin '89 and Joy (Morris) Irvin '91 MSN '10, all attended Franciscan. Chris Irvin, owner of Irvin Insurance Services in Wintersville, has been a member of the board of directors since 2019.

Of her 16 grandchildren, six graduated from Franciscan. The Irvins also have 15 great-grandchildren.

"I love college," said John, who still attends board meetings as a member emeritus. "It has been a joy and a pleasure to be with the friars all these years."

Gallabrese, an Ohio University graduate, joined the Herald-Star in 1981 as a sportswriter, serving in various editorial positions while working his way through the ranks on his way to becoming its managing editor in 2001 and executive editor of the Herald-Star and The Weirton Daily Times in 2009.

National Security Agencies; and Mark Geist offering a first-hand account of how he lived through the siege of Benghazi.

"When you live and work in an area, or do business in an area, it is important to be part of the community," said . “Our newspapers report on the people, institutions and organizations that serve our area. It is something we have done since June 7, 1806. It has been a privilege to have been able to be part of that legacy, and a privilege to have been selected to receive a Founders Award. "

Gallabrese and his wife, the former MarySue Merrill, have two children, Matthew and Lucas.

Giannamore was among the first group of students to earn a BA in English with a concentration in mass communication under Jim Coyle, who he graduated in 1984. He had worked in local radio news during his undergraduate years, but in 1985 he accepted a position at the Herald-Star. He spent more than 30 years at the newspaper, first as a reporter, then as a copywriter and editorial editor. He has been Executive Producer of WTOV-TV / FOX9 in Steubenville since 2018.

He said the transition was kind of a learning curve. Moving on to television news, "I had to find out all three or four plus points important things and let people tell their story, "he said .

In addition to giving him the tools for his craft, the University also played a role in Giannamore's personal life: in 1981, he met his future wife, Kathy DeMartin, in Spanish class. They have been married for 35 years and Kathy, a 1985 graduate, is Franciscan's assistant dean of online education.

The couple resides in Toronto, where they have been a lecturer, choir tenor and singer in the churches of St. Francis and St. Joseph for more than 30 years. He and his wife have two children, Marcus, who attended Franciscan where he met his wife, the former Taylor Oliver, and Gina. They are expecting their third grandchild in January.

Sister M. Regina Pacis Coury, FSGM, came to the Franciscan University as a professed sister in 1988, sent by her superiors to teach.

"Religious obedience is a wonderful grace and a gift from the Holy Trinity that leads to many more graces," he said . "Consequently, I spent six blessed years at the Franciscan University."

With an MA and Ph.D. in classical languages ​​from Loyola University Chicago, Sister Regina had taught classics at various universities before coming to Steubenville.

Her love of languages ​​began when she was a child when she read the Latin-English Missal during the Latin Mass. Growing up in a bilingual family also deepened her appreciation for the language. "Language was important to me and a constant source of fascination."

In Franciscan, he founded the Great Books Honors Program, "the best way to understand the development of Western thought and civilization and to find answers to the fundamental questions of life", and the Classics (Latin and Main Greek) Program, the literature that formed the basis of Western civilization in the original languages.

After teaching at Franciscan, she led postulants and novices, then became provincial superior of her order, the Sisters of Saint Francis of the Martyr Saint George, until 2014.

In 2004, he received an honorary doctorate from Franciscan.

She currently works as director of education at the Domus Sanctae Mariae Guadalupe, House of Studies of the Council of Major Superiors of Women Religious in Rome. In this position, she develops a study plan for the nuns who come to Rome to study "in the heart of the church."