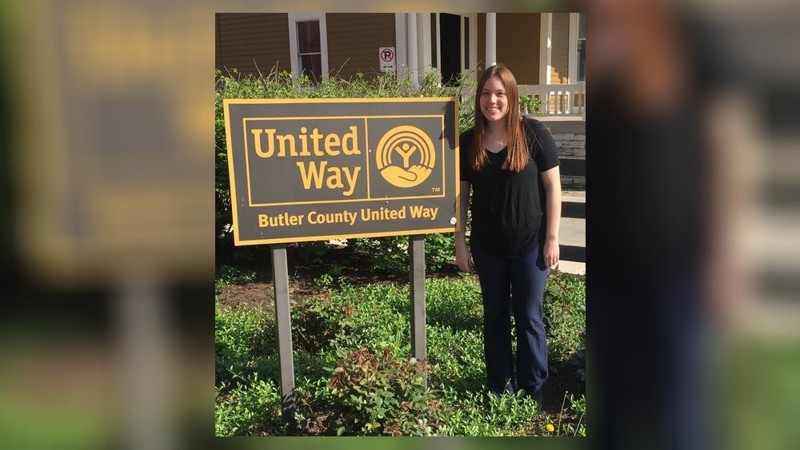 The Student United Way chapter of the University of Miami officially began last semester, but was in process since the beginning of 2018. work was recognized with an award for the woman who took the initiative in the effort.

Emily Callahan spent the last academic year as a social work intern at Butler County United Way before graduating from Miami in May. He is now working on a master's degree at Ohio State University.

Due to his new academic effort, he was unable to return to Butler County on December 5 for the annual United Way meeting and voluntary recognition, but was honored with the Junior Volunteer of the Year Award for spearheading the United Way Student Chapter launch at the Oxford campus in Miami.

MORE POPULAR STORIES: 11 great things that happened at Liberty Center this year, from openings to closings and upcoming events.


Krystal Tipton, vice president of community impact at Butler County United Way, worked closely with Callahan during her year as an intern. She said they gave Callahan a series of smaller projects during the first semester in the fall of 2017.

"Beginning with J-Term (January 2018), Student United Way was his project. She went through the training and took all the measures, "said Tipton. "She led everything in. It was great to see her take over and get the organization to be formed on campus."

Patrick Burns, a Miami junior who is president of the organization, credited Callahan with his work in creating the new organization in an interview for a recent story about the group.

"(Callahan) was officially started, she did all the difficult things, it was not officially recognized until the fall," Burns said.

Tipton said that they did not realize all the work involved in the official recognition of a student organization on campus, but Callahan did the necessary work to do so.

"We have a great partnership with Miami. She was a student and approached other student organizations, she did hours of training. Emily was very diligent. We are happy and proud of her, "said Tipton." He made a presentation at the Community Involvement office and they were on board. "

Tipton said that Callahan is more interested in dealing with problems at the" micro level " looking for community solutions instead of social work that deals with individuals' problems resulting from those problems.

"She wants to look at the community and the gaps and fill them," said the vice president of United Way. "The Student United Way was a lot of leg work, it was her baby and then she gave it to Patrick. "

Student United Way organizations are spreading to universities and colleges across the country to work with the local United Way on education and health issues. The Miami group introduced two "Boxes of Blessings" in the Oxford community where people who need some emergency food can take an item, but Tipton said he hopes they will encourage people to use it for an emergency need and make use of the Community of Oxford. Choice of the pantry on a regular basis.

The pantry is located in a building on the grounds of the Mount Olivet cemetery operated by the Church of Santa Maria. Access is off North Locust Street. The hours are from 5 to 7 p.m. Monday and Thursday from 2 to 4 p.m. Saturdays.

Mag Baker, president and chief executive officer of Butler County United Way, recognized six volunteers this past year and presented them with awards at the annual meeting.

In addition to the award for Callahan, The University of Miami was also recognized with the Spirit of Collaboration Award for its collaboration in the development of the CommUnity Connect volunteer portal. This portal, available to all, provides an easy and convenient method to help those who seek to volunteer, to find those who need volunteers. The award was accepted by Leigh Ackerman on behalf of the University of Miami.

The other awards were:

• The Spirit of Service Award was awarded to Karen Mueller, executive vice president of HORAN, for her service to Butler County United Way as past president of the Board of Trustees.

• The LIVE UNITED Partnership Award was awarded to Express Scripts for its participation in a workforce campaign, where its campaign donations increased by almost 100 percent. as well as volunteer events such as partnering with the American Red Cross to install smoke alarms in specific areas of Fairfield.

• The Building Block Award was presented to Katrinka Stone for her efforts and the many ways in which she supports the monthly publication. Building Block events organized by United Way.

• The Volunteer of the Year Award was presented to Jeff Eberlein, Brand Partner Partner / Brand Consultant for Good, in recognition of his continued attendance, as well as the solid and professional advice provided to the staff of the Butler County United Way.