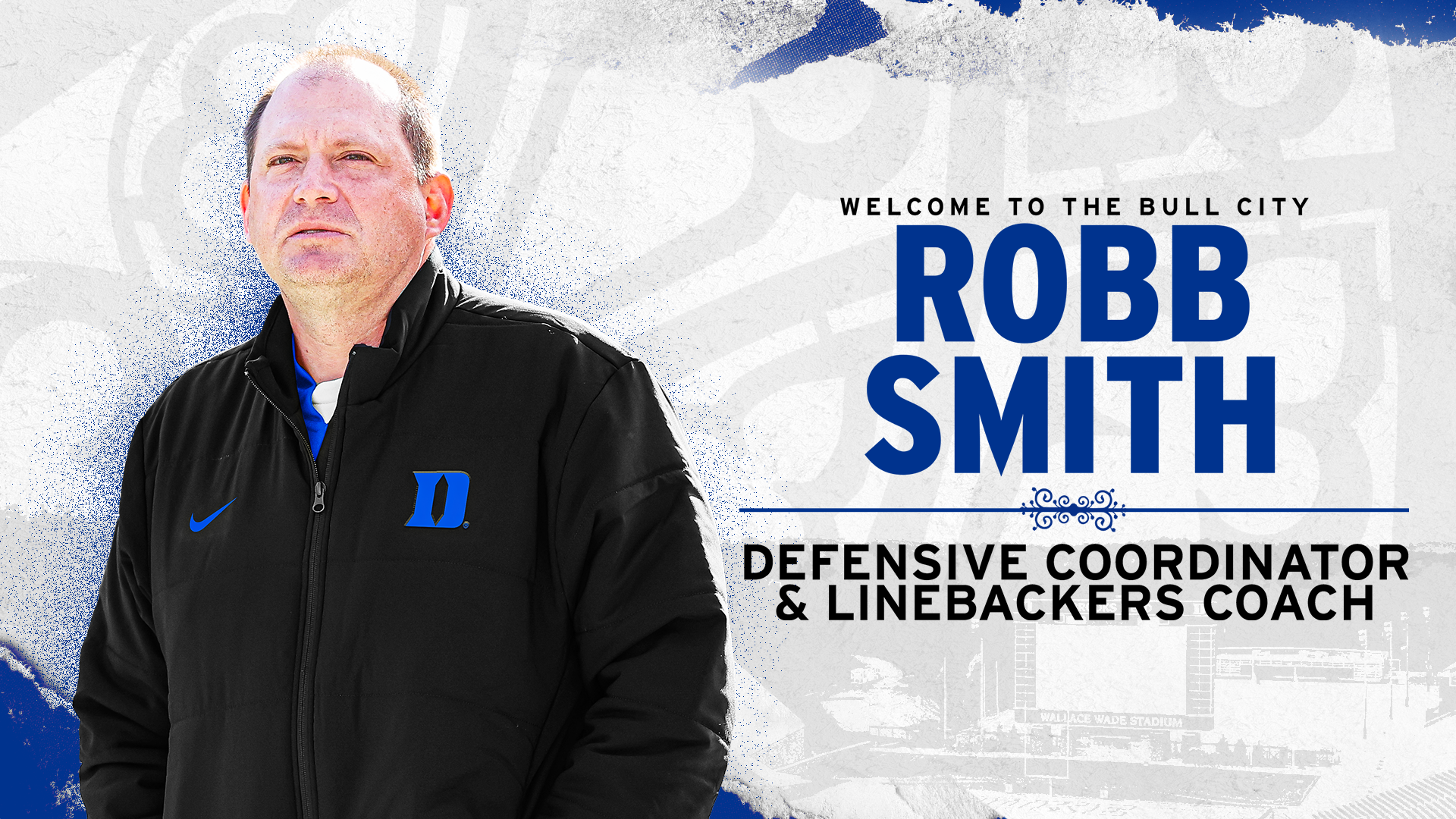 Smith and Elko served together on the defensive staff during the 2019 season at Texas A&M University, where Smith was a defensive analyst for the Aggies during their 8-5 season, including a win over No. 25 Oklahoma State at the Academy Sports + Outdoors Texas. Bowl.

Arrives in Durham after a two-year stint as defensive coordinator at Rutgers University under head coach Greg Schiano. Smith previously spent four seasons on the Scarlet Knights staff with Schiano from 2009 to 2012 and spent one season on his staff with the Tampa Bay Buccaneers (2013).

Under Smith's guidance in 2021, Rutgers maintained his opponents 52 of 162 on a third attempt (32.1 percent), the 10th-best percentage nationally. That mark included nine games that allowed five or fewer conversions with a season-best 1-for-14 at Indiana. The Scarlett Knights also finished the season by keeping their opponent under 300 yards of total offense on six different occasions and allowed just 31 points in the fourth quarter for the entire year.

In 2020, Smith led one Rutgers defenseman who won 19 turnovers, the most in a season since 2012 when he was previously the defensive coordinator. That included at least one takeout in eight games, multiples in four games, and at least four in two games. The Scarlett Knights also led the Big Ten that season and ranked 11th nationally with 7.8 tackles per loss per game and recorded three double-figure contests with a season-high 13 in a win at Maryland. Rutgers also had 21 sacks, the most in a Big Ten season and an increase of eight from the previous year.

Before his In the 2019 season as a defensive analyst with Texas A&M, Smith served as defensive coordinator at the University of Minnesota during the 2017 and 2018 seasons. The Golden Gophers allowed a total of 274 points in 2017, the fewest allowed by the team since 2004. Smith He also worked with linebackers and led Thomas Barber to the 2017 Big Ten after recording 115 tackles.

Before joining the Minnesota staff, he spent three seasons (2014-16) at the University of Arkansas as a defensive coordinator and secondary coach. Smith's defense in 2016 was solid in the second half of games, as the Razorbacks allowed just 51 points in the third quarter and 73 in the fourth quarter. His defense also produced just 12 aerial touchdowns in 13 games, while recording 10 interceptions, 14 forced fumbles, and 11 fumble recoveries.

In 2015, Smith's unit stood out against the run as Arkansas held 12 of 13 opponents below their season career average. The Razorbacks allowed just 116.46 yards per game on the ground, ranking second in the SEC and 12th in the nation.

A year earlier, their defensive unit ranked 10th in defense. scorer (19.2 points per game) and total defense (323.4 yards per game). It was the first time since Arkansas joined the SEC in 1992 that the Razorbacks finished in the top 10 in any of the statistical categories. Additionally, Arkansas became the first unranked team in college football history to post consecutive shutouts of ranked opponents when the Razorbacks shut out No. 20 LSU and No. 8 Ole Miss in November 2014.

Smith spent the 2013 season as Schiano's linebackers coach in Tampa Bay. He coached All-Pro Lavonte David to become the first linebacker and third player since the sack became an official statistic in 1982 to record at least 100 tackles with at least six sacks and five or more interceptions in a season.

The 2012 season saw Rutgers claim their first conference title since 1961 and the fifth in school history. The Scarlet Knights finished the year fourth in the nation in points allowed per game (14.2), sixth in rushing yards allowed per game (95.2), 10th in total defense (311.6 yards per game) and tied for third in rushing touchdowns allowed (6). Rutgers allowed just 91 points against seven Big East opponents, ranking as the eighth-lowest total in conference history. The defense held opponents to 95.2 rushing yards per game, marking only the third time in school history that the Scarlet Knights kept their opponent's average below 100 yards.

Under the tutelage of Smith, Rutgers became one of the best special teams units in college football. The Scarlet Knights ranked in the top 10 in blocked punts each of his three years as the unit's coach. Rutgers led the country in 2010 with nine blocked punts, tied for second in 2011 with nine and ranked eighth in 2009 with five. While Smith was at Rutgers, the Scarlet Knights led the nation with 31 blocked kicks. They were also one of the best in the nation in kicking and kicking returns for touchdowns, tying for fifth with five kickback touchdowns and tying for ninth with four kicking return touchdowns. His nine special teams touchdowns combined tied for the fifth-highest total in the NCAA during that time.

Prior to his time at Rutgers, Smith spent seven seasons at the University of Maine, serving his final three years as assistant head coach and defensive coordinator (2006-08). He was also on the staff as a special teams coach and linebackers (2005), as well as a defensive backs coach (2002-04). Under Smith, Maine boasted one of the best defenses in the FCS, highlighted by the 2006 team that ranked first in ground defense, second in total defense, third in sacks, and fourth in scoring defense.

He began his coaching career as a graduate assistant at the University of Iowa from 1999 to 2001 and earned his master's degree in communications studies in 2002.

Smith was a three-year card winner in strong security for Allegheny College from 1995 to 1997, where he helped the Gators to a 28-4 record, including the 1996 overall North Coast Athletic Conference (NCAC) title and a portion of the 1997 NCAC title.

Smith is married to the former Amy Ruden of Le Mars, Iowa, and they are the parents of two sons, Charlie and Jack.