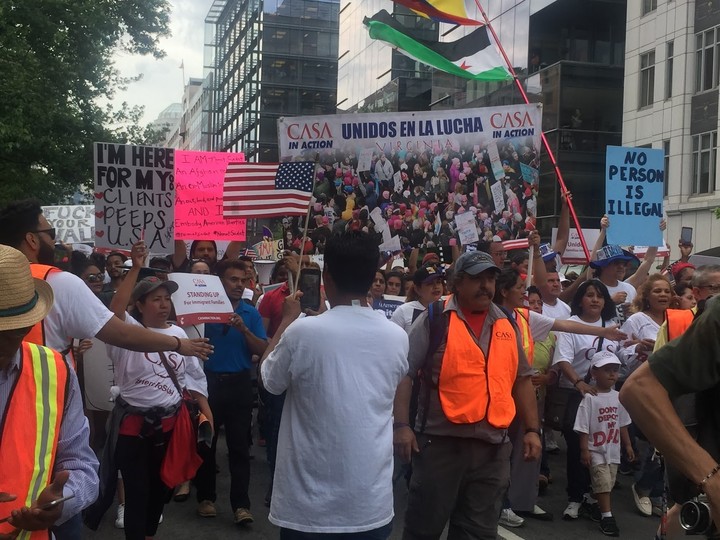 Effect Trump or not, immigrants are at home with CASA

By Ana Tarlas and Aya Elamroussi

Javier Luna He came to the United States from Peru when he was 24 years old in 1998. The economy was good, the labor market was abundant and American society was captivated by the Monica Lewinsky scandal.

Luna lived in the USA UU Until September 11, the 2008 financial crisis and the shocking presidential victory of Donald Trump. He considers that the EE. UU They are your home.

"Once I touch American soil, I feel at home," Javier said. "I feel safe, this is my house, I live here, I vote, I pay my taxes, I love this country."

Luna is a community organizer of the Central American Solidarity Association, or HOUSE. It is a non-profit organization in Langley Park, Maryland that specializes in empowering immigrants and providing numerous services to the immigrant community in general. The majority of CASA consumers are from Latin America, speak little English and come from a low-income environment.

With 70 percent of its foreign-born residents, mainly in Central America, Langley Park is the heart of the Latino immigrant community in Prince George and Montgomery counties.

Luna added that EE. UU It is his home, but President Trump's rhetoric and several executive orders have instilled a deeply ingrained fear not only of him, but of the people who voluntarily collaborate with, receive help and work for CASA.

"I understand that people are afraid, they have reasons to be afraid," he said. "I do not trust this administration, I'm really scared honestly about what can happen, especially being here in Washington, DC"

On top of a hill overlooking the nearby residential housing, CASA runs from a real estate mansion in the heart of Langley Park. The mansion is as impressive as the work done at CASA with its soaring ceilings and intricate staircases. Dark wood door frames guide visitors from room to room. The thick brown carpet cushions the feet of visitors as they walk through the mansion.

In CASA, Luna specializes in tenant defense. Often, he said, the owners take advantage of the tenants because they do not speak English. Most tenants are probably undocumented and lack the tools to advocate for themselves, he explained.

"They suffer from injustice, inequality and abuse by the owners, and we have many of these cases, especially in Langley Park." Luna said she loves helping people in this community.

"I get paid to help people, that's what I do, it's amazing, it's beautiful."

Every room in CASA is full of life. In one, the organizers discuss their plans for May Day. On the other side of the hall, small children play. Next to them is Anacamila Figueroa, Specialist in Registration and Public Benefits at CASA.

The most important part of his work at CASA, said Figueroa, is to educate the people who depend on his services. Many do not speak English or can not read or write, even in Spanish, especially if they come from rural towns in Latin America.

"Many people do not even know how to make a phone call to make an appointment, or how to pay their monthly premium," he said. "We are also really teaching many skills for life"

After Trump proposed the first executive order directed at immigrants, refugees and green card holders, Figueroa received frantic calls from a CASA consumer, a single mother. She asked Figueroa what was going to happen to her, because even though she had a green card, she and her family received public benefits such as food stamps and Medicaid.

CASA's political arm , CASA in action, organizes events for the immigrant community to participate in protests, marches and various political actions CASA IN ACTION also offers services such as citizenship classes and registration of immigrants to vote.

"On November 8, our entire community was distressed and completely breathless from the results of the elections," said Fernanda Durand, spokeswoman for CASA in action.

"We're not going to let the president push us in. We're going to talk, we're going to march on the streets, we'll continue to interfere with Washington and cities across the country, we're going to show that the power of immigrants is important in this country."

Despite the fear that CASA organizers, advocates and the community face, Luna is optimistic and confident about the reward despite the challenging work of volunteers and organizations, such as CASA.

"When people come together, we do things, if we organize ourselves, we can do whatever we want," he said.

Ana Tarlas and Aya Elamroussi are students of journalism at the American University. Aya Elamroussi is a communications intern at the Center for Community Change.