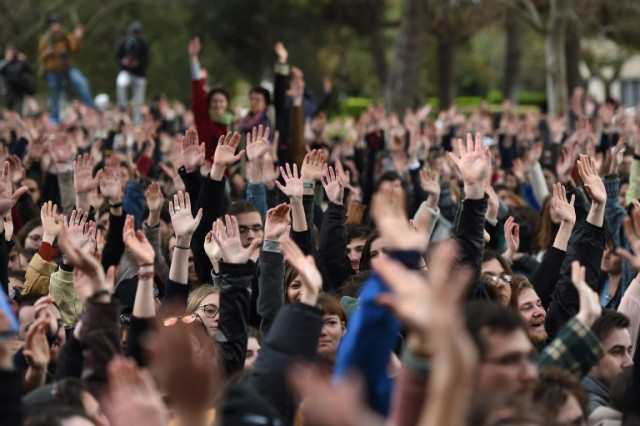 The dean of Montpellier University was formally accused of being accused of instigating a violent attack on students protesting educational reforms that have unleashed demonstrations on campuses across the country.

In recent weeks, protesters have closed or severely disrupted classes at several universities on the stricter entry requirements introduced by President Emmanuel Macron.

The universities of Paris, Montpellier, Toulouse, Bordeaux, Nantes and Nancy have been affected to varying degrees.

The situation intensified drastically last week in Montpellier, where hooded men armed with bats assaulted a conference room to evict the students organizing a sit-down

The videos shared on Facebook showed several men, their faces hidden, hitting students in the theater of law school with sticks and bats.

Three people were injured in the skirmish, which has led to "anti-fascist" demonstrations of solidarity by students from other universities, including in the northern city of Lille.

On Wednesday, the dean of the university, Philippe Petel, was arrested along with a professor, Jean-Luc Coronel, on suspicion of instigating or participating in the eviction.

Both were charged in the matter Thursday, said prosecutor Christophe Barret.

Several students claimed that they recognized several professors among the attackers.

Petel, which was suspended by the Minister of Higher Education, Frederique Vidal, denies the accusations.

The attack has heightened tensions between supporters and opponents of the protests that began in February on a new law that introduces for the first time an element of selection on merit for admission to the university.

In France, students can apply for any university course as long as they pass their baccalaureate, the final high school exam.

With conference rooms about to explode and more than a third of students dropping out of the first year of college, the centrist government of Macron has tried to adjust the standards.

Students who do not meet the criteria will be offered a place with the condition that they agree to take additional classes.

Opponents argue that restrictions are elitist and penalize students from poorer backgrounds.

But their sittings have caused frustration in some campuses, with students in Montpellier insisting on their "right to study" when the end of the year exams are glimpsed.

Vidal, the minister of higher education, established "two red lines" on Thursday on French radio: "no violence on campus … and allowing the university year to end and the examinations to be carried out in the best possible conditions"