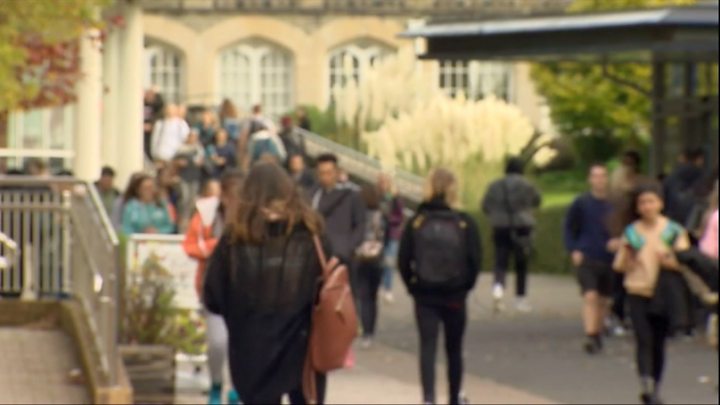 Coronavirus: the 'perfect storm' of the universities threatens the future

Universities are facing a "perfect storm" that could lead to "real problems," said a former university rector and higher education consultant.

Sir Deian Hopkin said that the number of students will fall due to the coronavirus and Brexit.

National students will also be reluctant to attend during the pandemic, he said.

Welsh universities said the institutions have shown they can cope.

Surveys have suggested that the number of international students occupying places at UK universities could be reduced by more than 50%, while other research has stated that national enrollment could fall by 15%.

In Wales, such a reduction in international students could lead to a loss of around £ 60 million in tuition.

Universities Wales, which represents Welsh institutions, acknowledged that "these are difficult times for universities" but said they had demonstrated their management skills.

Sir Deian, who was vice chancellor of London South Bank University for eight years, said: "The number of students from abroad is now likely to drop dramatically, and yet universities are so dependent on foreign students for their research and for support facilities.

"At the same time, there are some doubts that students in Britain may be reluctant to borrow £ 9,000 a year to take much of their courses online and none of the facilities that they would expect to find in the university. "

He said that universities had been borrowing money in anticipation of growth, but that the new facilities could end up unused.

The National Student Union (NUS) echoed their concerns, saying there were concerns the current situation would mean that students "will not get the same student experience" with many classes being taught online.

Due to current financial support during the pandemic and last academic year's fees, the real "crisis" could strike next year, Sir Deian said.

But Becky Ricketts, president of NUS Wales, said the pandemic also provided an opportunity to develop.

"It is an opportunity for higher education to really consider what we can do in 2020 and in the future, to make sure that students have access to education in a way that suits them, but also in a way that supports our institutions. ".

He encouraged prospective students to speak at universities as much as possible.

Research from the Institute for Fiscal Studies suggested that Welsh universities could lose around £ 3,800 per student to the coronavirus, a lower sum than those in England (£ 4,700) and Scotland (£ 4,500).

Last month, however, data released by the Ucas admissions service showed a record number of 18-year-olds in the UK. applied to study at UK universities.

What is not clear is whether students will defer their applications, particularly if there is a second spike in the pandemic as warned by the medical director.

According to the Higher Education Statistics Authority, a university with a net cash inflow of less than 5% could face serious problems as a result of the current climate.

The Welsh government said it was "aware of the challenges" and was providing £ 31 million. to support higher education.

"We are working with our universities to promote them at home and abroad and have published a guide to help with the safe return of students in the fall," said a spokesperson.